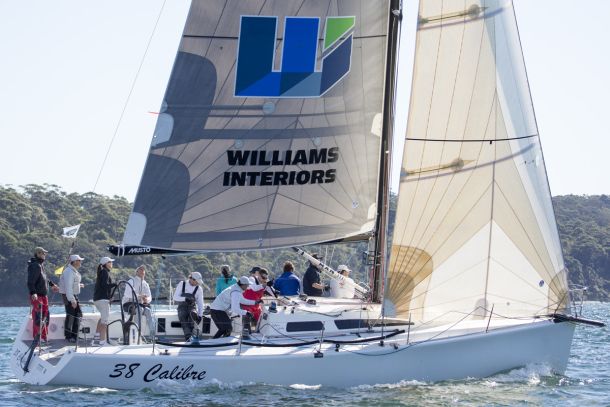 It was the Ladies turn in the Cruising Yacht Club of Australia Land Rover Winter Series today, the second of three Ladies Days hosted within the Series, and the day did not disappoint on this, the Queen’s Birthday long weekend.

Principal Race Officer, Denis Thompson, described the day as “A beautiful day out, it could not have been better. The fleet sailed in pleasant north-west and northerly winds. It was 12 knots at the top end and faded away to almost nothing later in the race.

“Clear skies, fairly warm with the sun out – there were a lot of happy faces,” Thompson ended.

Robertson’s win today has lifted Calibre up to second place overall in the three-race series, putting her in contention for the overall trophy, with just one race remaining. Wax Lyrical, an X-50 helmed by Julia Owens, leads the series in Division 1 by two points. Chancellor is currently third placed, one point behind Calibre in this series which has come down to the wire.

Spinnaker Division 2 was taken by the Jen Pickering helmed Sweet Chariot, the J109 owned by Ralph Pickering. She beat Peter Howes’ Halvorsen 25, Sea Rug Hoo Ha (helmed by Gwetta Quealy), by just over two minutes once the handicaps were applied.

However, the Nadine Elmsley skippered Saltshaker. A Sydney 36 Cruiser/Racer owned by Peter Franki, leads the Division 2 series overall, as the winner and third overall today were casual entries not entered for the entire three-race series.

Saltshaker leads the overall series by just one point over Sea Rug Hoo Ha and the Susan Hardy steered Clewless?, Guy Irwin’s Cape 31. The winner will be decided in the final Ladies Day Race, which will close out the Land Rover Winter Series on 12 July.

L’attitude’s win today has given her the series lead from Marloo, but the two are on equal points in a close fight to the finish.

Meyers was thrilled with her handy work: “I’m so excited,” she said. “Today was a real mixed bag. There was plenty of wind to start with – and then it just died. I thought Monkey Business would overtake us at the top mark, but it disappeared.

“The crew did a great job, so I was able concentrate on steering the boat,” Meyers said. “We’re just firing up the barby on the boat; we’re going to celebrate with a sausage sizzle. Last week the sausages were just about done by the time we reached the CYCA, but as I do the cooking too, we had to wait till the race was over this week.

Jublilee missed the first Ladies Day Race as Arthy and his crew were sailing the boat down from Port Stephens, but Meyers, who normally does bow, radio and timekeeping on Jublilee, said: “We’ll definitely be there for the final race. I’d love us to win again.”

Overall for the Series, the Anna Wilken’s skippered Hubcap II has a two-point advantage over Monkey Business and the Jackie Sapir steered Defiant.

Calibre’s skipper, Kate Robertson, was the lucky weekly division winner drawn to receive a Land Rover Range Rover Evoque experience for a week, and being a long weekend, the car could prove a bonus for Robertson.

Prizes are also awarded to first, second and third placegetters in each division each week and include exclusive CYCA Land Rover Winter Series merchandise.

Racing in the Land Rover Winter Series continues next Sunday with Race 7 of the pointscore due to start from 11.30am off Point Piper.