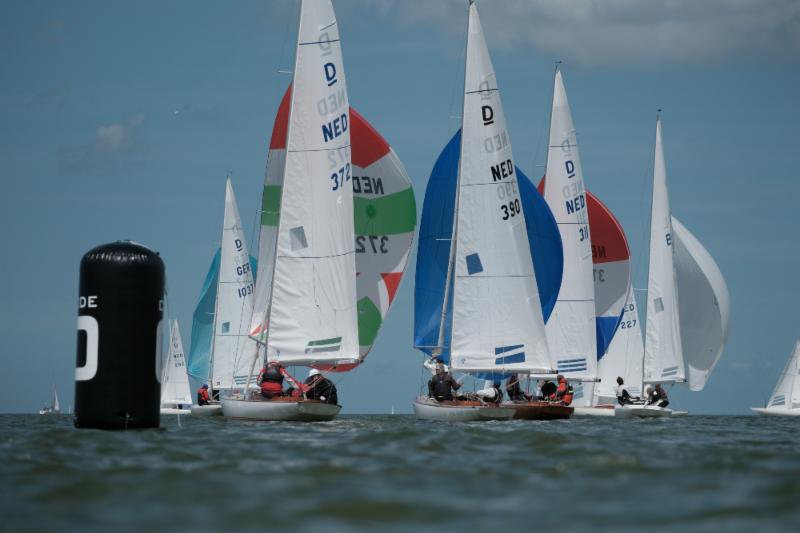 10/06/2019
9 June 2019 – Medemblik, Netherlands – After the gales of practice day, the opening race day of the Yanmar Dragon Gold Cup 2019 in Medemblick got off to a promising start. Following a skippers’ briefing the fleet and race committee left the dock and at the appointed time of 13.00 the course was laid at 2.5 miles long on a bearing of 240 degrees, all 96 teams were in the start area and Race Officer John Borsboom rolled into the starting sequence with the Uniform flag in operation.
Staring 96 highly competitive Dragons off a single line is not an easy job, but here in Medemblik not only had the committee set an excellent 0.9 mile long line, but their use of a pair of line location indicator buoys at approximately 0.3 and 0.6 miles along the line helped to produce one of the most even start lines you could hope to see. The fleet was clearly on its best behaviour, their minds no doubt focused by the combined threat of disqualification under the U Flag penalty if they were over the line and the fact that there are no discards in the series and, most unusually for a Gold Cup, they got underway at the first time of asking.
The Dragons headed away from the line in 7-8 knots of wind and made a stunning sight spread out across the Ijsselmeer with Medemblik’s historic church spires in the background. As had been forecast, the wind began to drop a little and clock right as they came up the beat and the race committee signalled that not only had they moved the leeward gate to allow for the shift, but they had also shortened the leg down too.
Leading the fleet as they rounded was the Dutch team of Charlotte ten Wolde, who is crewed by her sister Juliette, Janka Holan and Francisco Rebelo de Andrade. Right on their transom was Francisco’s brother Pedro Rebelo de Andrade sailing with Goncalo Almeida Ribero and Christian Giannini, and it was clear there was more than a little bit of friendly sibling rivalry between the two boats as they vied for position. There was then a small gap back to the pack which was led by Dutchman Mart ten Harmsen vd Beek with Monaco’s Jens Rathsak fourth, Germany’s Maximillian Dohse fifth, Peter Gilmour sailing for Japan sixth and Russia’s Evgenii Braslavets seventh.
As the boats started down the run the wind began to drop even further and before long, they were barely ghosting along. Those who had gybed at the weather mark held the breeze longest and gained a number of places, but soon they too were completely out of wind. It quickly became clear that there was no hope of a rapid return of the wind and the race committee wisely decided to abandon the race and try again.
The forecast was for the wind to swing into the north and build again, but sadly it wasn’t to be and eventually the announcement came over the radio that all boats should return to harbour for the day. The race committee immediately swung from race management to towing mode, rapidly getting all 96 teams on tow and headed back to Medemblik’s stunning old harbour where the Opening Ceremony awaited them.
After racing Charlotte ten Wolde and her team were delighted to have led the fleet in the opening race, but understandably disappointed that the weather prevented them from finishing the race. Asked for the secret to beating the best Dragon sailors in the World to the top mark Juliette explained simply “We had a pin end start and then we actually sailed almost straight out to the left, tacked onto the lay line and rounded the mark!” Her sister Juliette took up the story of the run saying, “The wind had already started to drop out as we rounded the first mark, it was quick tricky and we sailed on little bit and they abandoned about half way down.”
Belgium’s Guy Celis, crewed by Willy Hambrouck and Steven Vermeire, was also having a good race “We started in the middle and had a good start and then I saw the girls and Pedro going to the left and other good guys going to the right so I tried to play the shifts, but it was very tricky and we came ninth round the first mark. I saw several people going right under spinnaker, so we went left and we had more wind and for longer, we were about fourth or fifth when they stopped the race.”
At the Opening Ceremony, held at the picturesque harbour side regatta village, the competitors were warmly welcomed to the town, which has a centuries long seafaring tradition and a great history of hosting major sailing events. Tribute was paid to all the volunteers of the Royal Netherlands Yacht Club, the Royal Yacht Club Hollandia and the Dutch Dragon Fleet who have given up their time to make the event possible. There were also thanks for the regatta’s sponsors, led by Yanmar, Medemblik Municipality and Stadshaven BV for their most generous contributions.
With the formalities over the competitors were able to kick back in the evening sunshine and enjoy the wonderful camaraderie for which the Dragon fleet is famous as they were served delicious snacks provided by Muziekcafe Brakeboer, and free beer and wine sponsored by Lakeview Consultancy.
Better winds are forecast for day two of the competition and the Race Committee aim to start racing on time at noon with a view to potentially completing two races. A total of six races are scheduled with the results of all races to count. Racing continues until Friday 14 June.