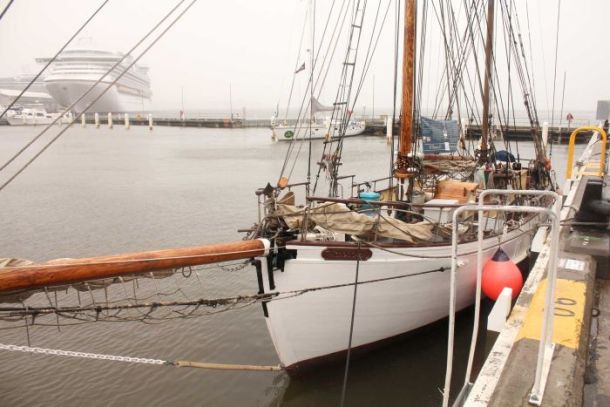 The Hobart weather has been a good test for leaks for the Rhona H. Photo 936 ABC Hobart: Fred Hooper.

Tied up at Constitution Dock in Hobart is the 1942 tall ship Rhona H, the self-confessed labour of love and life-changing project for a former Queensland resident.

Julie Porter moved to Tasmania in 2010 from Charters Towers where she had lived and worked for 18 years. It was in Tasmania that she met her partner Charles Burns and they discovered they shared a passion for tall ships.

“We fell in love with each other and we also fell in love with Rhona H,” Ms Porter said. “When we saw that she was alongside Constitution Dock and the previous owner was on board, we stopped, had a chat, negotiated and from there we actually bought her.”

Originally from England, Mr Burns brought years of experience as an engineer to the restoration of the former fishing boat. He said it takes a special person with “a little bit of madness” to take on a project like this.
Read the full story, including how the couple use traditional materials and methods, on the ABC website.