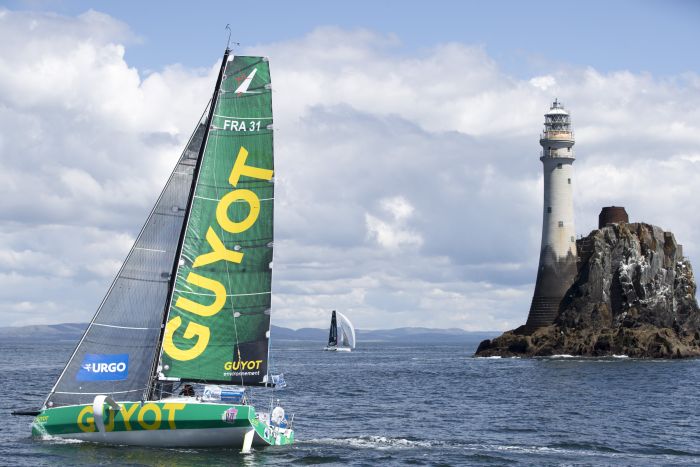 Overall winner in 2016, Yoann Richomme was doing all he could to hold on to a lead of just under half a mile late this afternoon, seeking to close out what would be a well deserved victory on the first stage of the 50th La Solitaire URGO Le Figaro.

First around the Fastnet Rock at 1229hrs local time, Richomme, 35 from Lorient, was being chased by talented, hard driving 21 year old rookie, Tom Laperche (Bretagne CMB Espoir) and Pierre Leboucher (Guyot Environement) as they race towards the finish line of the course which is to be shortened by 11 miles at the Old Head of Kinsale. There was nothing between the three as they traded gybes and a stage which has lasted four nights and four days since starting from the bay of La Baule near Nantes, hangs in the balance.

Deliverance from one of the longest and most challenging Solitaire legs of recent years will doubtless feel magical for the top trio who were 15 minutes clear of the fourth placed solo skipper when they rounded the mythical rock in very light winds. But since the turn they have made decent speeds under spinnaker and should cross the line at around 1900hrs local time this evening.

Richomme, outstanding winner of the Route du Rhum in Class 40 last November, has come into this race feeling none of the pressure heaped on some of his rivals. After Volvo Ocean Race winning skipper Charles Caudrelier seized an opportunity to become co-skipper of the Gitana Ultime, Richomme was drafted in as a late replacement for Caudrelier for whom he started out in the Figaro as preparateur.

He and Leboucher led a group who took a middle course off Ushant and then stuck with it across the approaches to the Channel and over the Celtic Sea. Their choice allowed them to gain relative to a strong pack who went offshore to the west, which ultimately suffered last night when the wind swung more to the north.

Around three miles behind Richomme, veteran Loïck Peyron, the elder statesman of the course at 59 years old will be happy to hold on to the sixth place he was in during this afternoon's sunny slide east along the Irish coast to the finish line. Peyron is returning to La Solitaire for the first time since he was sixth overall in 2003. He had his 'roaring 50s' rivals Michel Desjoyeaux, 53, less than a mile behind in ninth place and Alain Gautier, 57, in 12th. Peyron said at the Fastnet: “I'm 30 miles from the finish. It's not bad to avoid the last vagaries of the wind on this coast to get finished tonight “

Highly fancied favourite Armel Le Cléac'h (Banque Populaire) may have rescued some of his chances of a good finish overall by recovering from being among the back markers on Tuesday to be 13th on the reach in this afternoon, but the same might not hold true for the group of top seeds who went west, led by three times winner Yann Eliès (Saint Michel). Eliès – who led during the second day of racing – was nearly three and a half hours behind at the Fastnet Rock.

Admirable recoveries appear to have been achieved by international skippers Justine Mettraux of Switzerland on course for 14th and Brit Alan Roberts (Seacat Services) who was 16th, both around one hour behind the leaders.