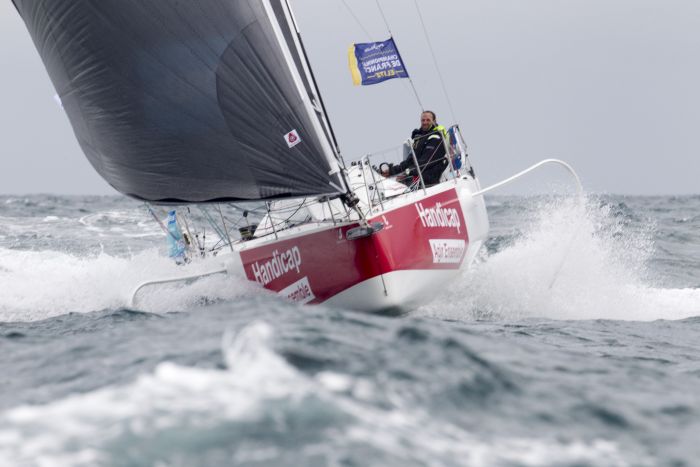 After he eked out a dream 18 nautical mile lead on stage 1 to Kinsale, Ireland, runaway amateur Henri Lemoncier appears to have had his wings clipped to have been overturned by three times La Solitaire winner Yann Eliès this afternoon.

La Solitaire first timer Lemoncier, a research and development electrical and computing engineer who is racing the 50th La Solitaire URGO Le Figaro for fun – to pitch himself against the best solo sailors in the world – left his sailing heroes in his wake between yesterday afternoon and midday this morning.

Lemenicier, 40 years old from a small village near Brest, made his break when the 47-strong fleet tussled with an energy sapping high pressure ridge which produced only very light, and at times random, winds.

As the smart money – some of the most accomplished Figaro sailors on the race – chose to stay to the west, outside Belle Ile, Lemoncier on his self funded Eureka, wriggled free of the pack and at one point this morning was the best part of 20 nautical miles clear of the star studded fleet.

But as the breeze finally returned with a new cold front around midday, Eliès in the west hooked into the best of a period of brisk winds and pulled back through the fleet from 11th to first, marking his intentions clear to become the first sailor to win La Solitaire URGO Le Figaro four times.

The 44-year-old Eliès is not only spurred by his innate desire to win, and to finally better his triple winning counterparts, Jean Le Cam, Michel Desjoyeaux and Jérémie Beyou. He wants victory to be a clear statement that despite his outstanding talent, he has been unable to land a principal sponsor to allow him to build a competitive, new boat programme for what would be his third Vendée Globe.

When other French sailors who do not yet have his race record have new IMOCA 60s in build, Eliès would love a fourth win as the perfect riposte.

The skipper of Saint Michel, Eliès, reported to Race Direction early this afternoon: “It’s quite lively out here. About half an hour ago, I was surfing along fast, but it’s calmed down a bit now and there’s some blue sky. I don’t really know where my friends are ahead of me. The weather isn’t that easy and it’s not clear if there’s going to be much wind or not. I have had to improvise a lot since the start. Now it’s a bit calmer, I’m going to try to find a moment to get some rest and eat something. I have to grab any opportunity I can, as it’s not been easy so far with a lot of transition zones. But I managed to sleep well during the night, so I’m feeling fine now.”

With 300 miles to sail to the Fastnet and then Kinsale, Eliès was over half a mile clear of second placed Adrien Hardy (Sans Nature, Pas De Future) this afternoon. It was Hardy who won this leg when it was last contested in 2010.

Ironically back then it was Hardy who triumphed into the picture postcard Irish haven, taking victory by just 1 minute and ten seconds over Eliès. As they approach the most north western point of France, the tip of Brittany, there is less than one mile between the top five sailors. Beyou (Charal) has also recovered well to sixth at 1.6 miles behind his nemesis Eliès.
Previously expected at the finish as early as Wednesday night it seems more likely to be daytime Thursday when the leaders cross the finish line.

English skipper Will Harris (Hive Energy) has worked hard to remain fast and benchmark himself against those around him, remaining relatively conservative with a lane which is to the west where the breeze is stronger but not too extreme. Harris – who won the top rookie title on his first La Solitaire – was 13th this afternoon, up to within 3 miles of the leader and sailing up to half a knot faster than those around him.

The Irish sailing community’s hopes of an additional reason to party in Kinsale this weekend rest with Tom Dolan (Smurfit Kappa) who has spent the day in the top 13-15 of the fleet but is erring well to the east as the leaders approach the Traffic Separation Scheme off Ushant and this evening is 21st 4.4 miles behind leader Eliès.

The winds are due to blow more from the north-west and during the evening and night forecasters are saying there might be as much as 25knots as the leaders head close to the Scilly Isles before tacking upwind to the Fastnet where the winds are still expected to be light to moderate for the final passage to the finish line of what is shaping up to be a very long first leg.
Fans can follow the race on the official website and on the English Twitter account here. (https://twitter.com/SolitaireEng)