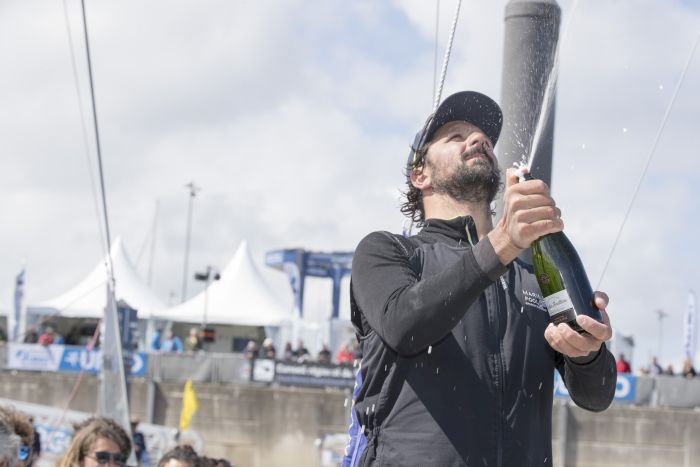 After the first two stages of La Solitaire URGO Le Figaro, at the theoeretical midpoint of the 50th anniversary edition Yoann Richomme (HelloWork-Groupe Telegramme) appears to have risen head and shoulders above his opposition.

On the French multi stage solo offshore race which is usually won overall by minutes, and in 2002 was won by Armel Le Cléac'h by just 13 seconds, 35 year old Richomme's margin of more than two hours on nearest rivals like Pierre Leboucher, Armel Le Cléac'h and a few others appears almost impregnable.

But at this half way point of the race it is important to note that the first two stages have been complicated, difficult challenges during which gains and losses have quickly magnified. But now the second two legs are now primarily confined to the complex playground that is the Channnel with its many transition zones and tidal gates.

It is clear that the new Figaro Beneteau 3 has ushered in an entirely different game. So far this 50th edition has proven a topsy turvy race, the first group to finish the first stage have been among the last in the second stage and vice versa. And so you will find many of the top seeds, the usual big hitters of La Solitaire, languishing quite far down the leaderboard.

“Veni, vidi, vici”….will the motto of Julius Caesar apply to Yoann Richomme on this 50th edition? Although he replaced Charles Caudrelier on the Figaro Beneteau 3 just two months ago after the Volvo Ocean Race skipper was recruited to co-skipper the Ultime of the Gitana Team Richomme has demonstrated an exceptional ease on the water and that has impressed, indeed confounded, his rivals.

But he is no overnight sensation. A graduate through the Skipper Macif programme which produced Vendée Globe winner Francois Gabart, Richomme won La Solitairein July 2016 in La Rochelle in 2016. And last year he was the outstanding, untouchable winner of Class 40 in the Route du Rhum-Destination Guadeloupe 2018 in Class40. After an absence since 2016, during which he has been unsuccessfully pursuing partners to get a competitive Vendée Globe off the grounds, Richomme returns to compete this year for the eighth time. From 2010 to 2016 he was successively 19th, 26th, 19th, 4th, 19th, 8th and then first. But it his win in 2016 which serves as his reference point on this race: “When I won the Solitaire in 2016 it was my lesson how much involvement I needed to put in. I think I came back to the circuit this year in the same spirit, knowing that it took a lot of commitment to be quick all the time but also to be ready to seize the slightest opportunity, ” he said when he arrived in Roscoff yesterday.

But it would be wrong to crown Richomme too early, even with that lead. Despite the technical problems associated with its youth, the one design Figaro Beneteau fleet was only launched in February, the speeds and angles sailed do seem to promote greater gains and losses. The courses set by Race Director have been, by philosophy and design, wider and more open.

Another key factor which has been mentioned time and again by top skippers during the stops is that the game has changed completely because of the reduced range of the AIS – the radar based safety tracking system which allows marine traffic to be monitored.

When previously the antenna on the Figaro Beneteau 3 gave a range of 20 miles, on the new version boat it is more like three. So being able to monitor the fleet and cover the moves of key rivals is no longer possible.

We are back to the (good old) days when the only information as to fleet positions are those radioed from the race direction boats, given only as a fleet placing and disance from leader in terms of miles to the next waypoint or finish. So no longer are we seeing a tight, compact peloton racing like the Tour de France cycling, everyone glued to a monitor to stay with the pack, then relying on being fresh and lucid to unleash a sprint finish.

So the game has moved on. With the Figaro Beneteau 2 the title would be sealed at half time for Richomme. The skipper of HelloWork-Groupe Telegramme now has 2h23 'ahead of former French Olympian Pierre Leboucher (Guyot Environment), 2h34' on local hero Armel Le Cléac'h (Banque Populaire), and 2:48 on Éric Péron (French Touch), 2h54' on the “bizuth” Tom Laperche (Bretagne CMB Espoir) and 2h57 'on Corentin Douguet (NF Habitat). Everyone else is more than three or four hours behind the leader. But an upset is entirely possible.

Light winds are expected for next week and the tides strengthen, the coefficient rising to 80 and passages through the notorious chenal du Four the Raz de Sein, Fromveur, Wolfrock, Casquets, the Channel Islands, the bay of Saint-Malo and the island of Bréhat are all pinch points where light winds and contrary tidal current can mean hours lost.

It is not a leader's pre-ordained right to have all tidal gates open and close on cue, just as it was a just misfortune of timing last night which saw late finishers in to Roscoff losing three hours becalmed on a contrary tide.

Richomme and Hardy in the Jury Room Meantime the Jury will sit on Friday to deliberate on several protests and claims for redress. Stage 2 winner Adrien Hardy (Sans Nature pas de Futur) has been protested by the Race Committee for straying in to the Cherbourg TSS and overall leader Yoann Richomme will have to respond to a protest by the Technical Committee that he took a sail on board after the allocated preparation time limit in Kinsale. Both are at risk of time penalties. In terms of precedent in 2015 Xavier Macaire commited a similar infringement was penalised an hour. For Richomme the range of penalties is widely expected to be measured in minutes rather than hours.

Redress is sought by Benjamin Schwartz whose boat was damaged in a pre-start collision and also by Martin Le Pape (Skipper Macif 2017), Thomas Ruyant (Avens-Fondation de la mer) and Cécile Laguette (Eclisse) who are all claiming for manufacturer's technical failures which caused them to abandon Stage 2.