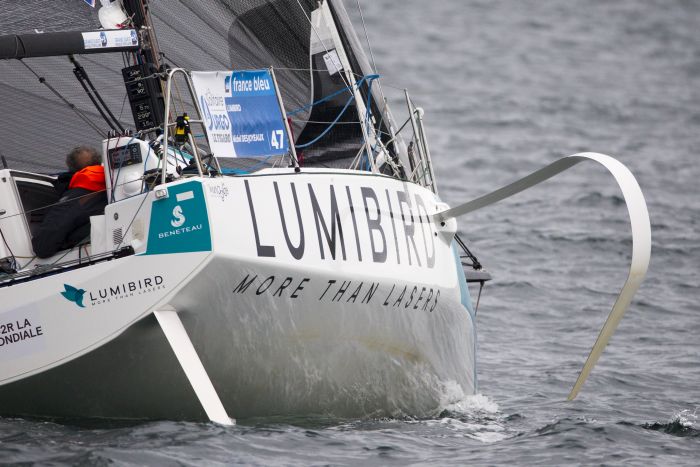 As stage one of the 50th La Solitaire URGO Le Figaro completed its first 24 hours at sea, racing 553 nautical miles from Pornichet to Kinsale, Ireland, leaders Adrien Hardy (Sans Nature Pas de Future) and Michel Desjoyeaux (Lumibird) were fighting hard to contain a pack of pursuers who were threatening to pass on both sides to their west and to their east.

Hardy, who is from Nantes – the official start city for this historic edition – is a former French 420 dinghy champion and Mini class racer. As the skipper who won this passage to Ireland when it was last sailed in 2010 – when the fleet raced from Brest to Kinsale – he knows this course from the west of France well.

Since he first raced La Solitaire in 2008, Hardy has won stages in 2010, 2013, 2015 and 2017 and was runner up last year to Sébastien Simon. Accompanied by the wily silver fox Desjoyeaux, who has won the multi-stage solo offshore race overall three times, the duo largely survived a big slow-down this morning and early afternoon in light winds at the Ile de Yeu, NW of Les Sables d’Olonne, as a messy ridge of high pressure engulfed the fleet. Speeds among the 47-strong fleet were less than one knot at times.

But during late afternoon on Monday, almost exactly 24 hours after the stage started in a blaze of glory under gennakers on the bay of La Baule, a group lead by the tenacious, talented Mediterranean rookie, Achille Nebou (Le Grand Reservoir) had made gains inshore in a more settled breeze and favourable current and cut the leaders’ margin from nearly one mile to just a few tenths of a mile. And on the other side, to the west, Pierre Quiroga – also a former top French dinghy racer from the Mediterranean – was posing an equal threat to the two pacemakers.

The first 24 hours have seen a real mix of fortunes for the international, non French sailors in the fleet. The biggest disappointment is the highly fancied Alan Roberts (Seacat Services) who seemed to get stuck off the bottom of the island in the very light winds, dropping right to the back of the fleet. Roberts, who holds the record for the highest overall finish by a British sailor with his ninth place in 2015, was fighting back on that easterly, inshore flank this afternoon but was 11 miles behind the leaders.

Ireland’s Tom Dolan (Smurfit Kappa) read the breeze at the island light winds crossroads better and, at one point, had got himself up to ninth. This afternoon he is 12th, less than 2 miles from the leaders, and racing closely with three times La Solitaire winner Yann Eliès (Saint Michel).

Dolan, who is racing just his second La Solitaire URGO Le Figaro, reported today: “It has been a long day with a lot of time spent pulling on ropes and driving under the blistering sunshine, but it looks like we are just about out. In general we are a bit late. I have eaten but at the moment I am trying not to sleep, you can drop off and then suddenly all your little mates are gone.”

Also on just his second La Solitaire, England’s Will Harris (Hive Energy) is mid fleet in 25th, with several top seeds around him. Harris reported this afternoon that he has lost the use of his wind instruments at the top of his mast.

“It has been a really complicated start for me. Last night my wind instruments completely crashed and broke I think there is some water damage up at the top of the rig and so now I have no wind instruments that makes it a but more challenging to race as I now only have compass, so it is hard work to keep up with the others. But I am happy to be out racing and I am enjoying being back on La Solitaire. It has been really close from the start of the race and I got a bit preoccupied trying to fix the boat, but it was an amazing start, so many boats around, a really cool place to start a boat race from. It has been tricky because I did not have the best of starts, then I caught up a bit and now lost a bit again so I think it will be like that over the next three days. Let us see what the rest of the day brings.”

Battling to escape a ridge of high pressure, there could be a big gain for those who can wriggle free first. The general strategy is to get out to the northwest to meet a new breeze first. The balancing act is whether to push out west earlier to find the wind but sailing extra miles, or to wait for the new wind to fill in and sail a more direct course.

A new depression is deepening off the south of Ireland, bringing a SW’ly wind. Tail enders may struggle to get free of the light zone and there is a risk of them being left behind. Tonight and in to early Tuesday morning the wind will swing back to the SSW and so there will be better downwind sailing conditions from Tuesday.

That new breeze is forecast to build, according to the race meteorologists MeteoConsult, with gusts over 25knots as a cold front passes on Tuesday bringing crossed seas. The choice of passing to the west or east of the infamous Ushant traffic separation zone may prove critical. And inshore the tidal currents are stronger. As usual the winds behind the front will be unsettled in strength and direction but the long term objective seems to be to get west.