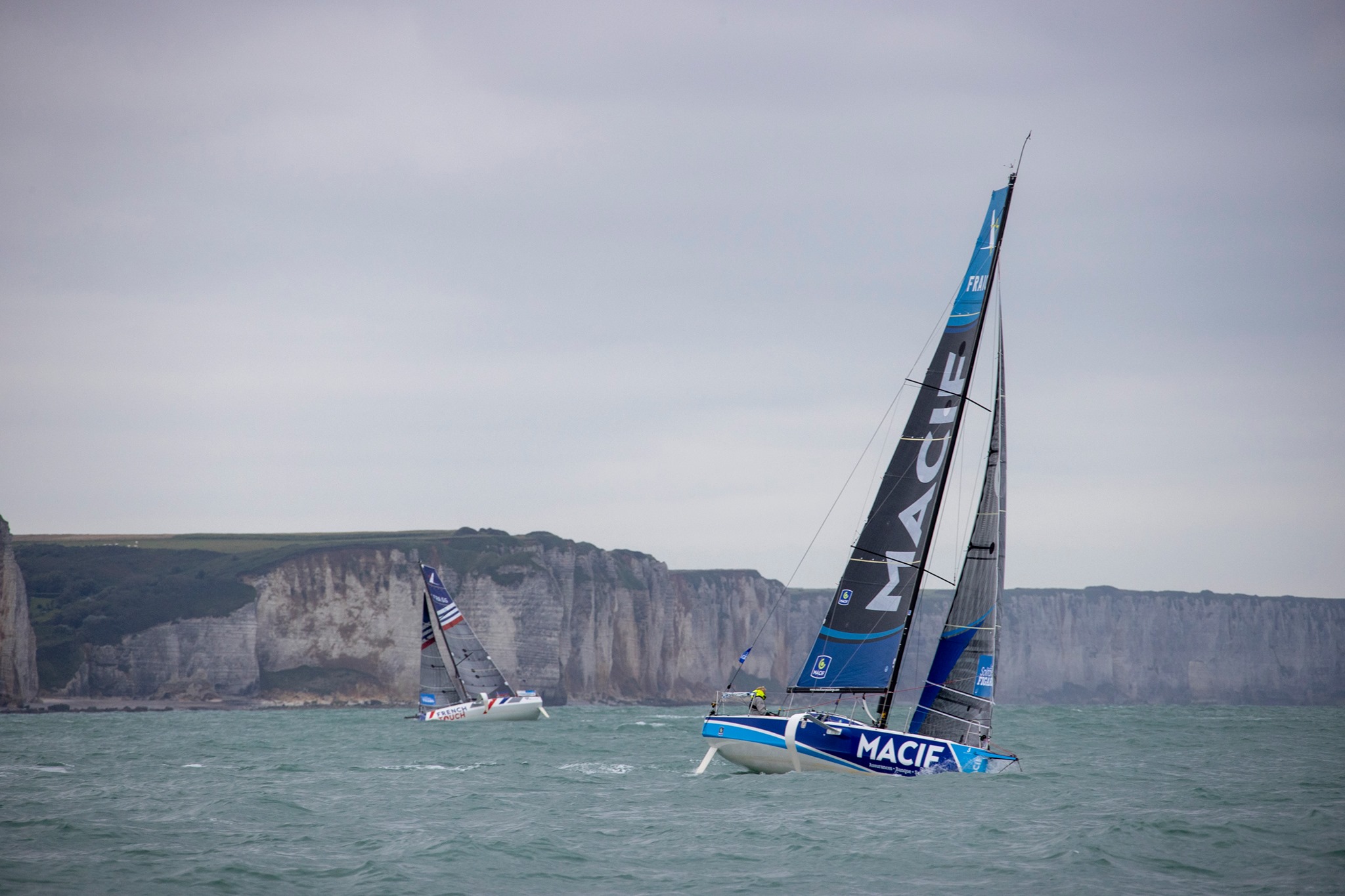 Following his Stage 2 win of the 52nd La Solitaire du Figaro, Pierre Quiroga (Skipper Macif 2019) now takes the overall lead by 1 hour and 36 minutes after Stage 1 winner Xavier Macaire (Groupe SNEF) had to dive on Monday evening to remove a fish pot from the keel of his Beneteau Figaro 3.

Macaire still lies second overall but, after losing touch with the leading pack, crossed the line today in 14th over two and a half hours after 28-year-old Quiroga who scored the first Stage win of his career on his sixth participation.

Quiroga, who came second in Stage 1, sailed a textbook leg, twice taking the chance to split from the leading pack and make decent gains to ensure he was 56 minutes and 19 seconds clear of second placed Tom Laperche (CMB Bretagne Performance). Achille Nebout (Primeo Energie – Amarris) took third across the finish line this morning.

Quiroga who originates from Marseille and is a past French Olympic sailing squad sailor, finished ninth overall on the last edition of the race in 2020 and sixth in 2018. He won the long offshore stage of this season’s curtain raiser in March, the Solo Maître CoQ.

After the start from Lorient on Sunday, Quiroga took the lead of the 34 strong fleet in the middle of Monday morning during a breezy close reach up the west coast of Brittany, sailing nearly a mile offshore of the lead group, passing Tom Laperche (CMB Bretagne Performance). Quiroga built his lead on the long beat to the Channel Islands when he tacked north of the group and was twice able to find a more favourable, lifted wind angle. With more than half of the stage raced upwind in North Easterly breezes of up to 20 knots when boat speeds would normally be very close, Quiroga’s performance is impressive.

A 28-year-old who has a diploma in international business Quiroga and third placed Nebout, 31, are both sailors who started their offshore sailing careers on their native Mediterranean, both winning talent identification programmes and joining the Med training centre at La Grande-Motte.

Quiroga looked relaxed on the dock in Fécamp, “The general classification? I think about it, but I take everything as it comes, I will first savour this victory. Opening the course among the rocks of L’Aber Wrac’h for a guy from the Mediterranean is not easy. Clearly my six years of experience here have paid off. I am amazed and delighted to have won this stage in such a beautiful way. It was hard, hard, hard! I thought this leg was never going to end.

“What I do know is that I have now fulfilled my deal. The objective was to achieve a stage victory, and that’s it done. On the first stage I was not far off with that second place. And now, on such a complicated stage, with the currents, tacking a lot of the time, it really tested all that a sailor should know how to do. To take the lead in the Raz de Sein and the Raz Blanchard, ahead of the best Figarists, was a thrill. But it was important to stay calm and keep a lid on my emotions.”

While Macaire lies second in the General Classification, Laperche who is 24 and has been selected by Francois Gabart as co-skipper of his new giant Ultim, is only 13 seconds behind him in third place.

Laperche revealed that he too had problems with a pot in by the rocks and was dealing with that when Quiroga slipped offshore. “He was a mile ahead, I had caught a pot off Portsall. I didn’t see him go,” said Laperche. “I was thinking about my own course, which wasn’t too risky, I was going to go with the flow. I took a lot of the fleet with me at the time I think.

“Then early in the morning, I saw that Pierre was gone, but I wasn’t sure where he was. And then it was beautiful to see the cliffs this morning when I arrived, I had not been here for a long time! It’s satisfying to be in front, now I would like to win a stage.”

It was a generally disappointing stage for the top international La Solitaire du Figaro racers. Neither Briton Alan Roberts (Seacat Services) nor Ireland’s Tom Dolan (Smurfit Kappa-Kingspan) started the race well from Lorient on Sunday. But Roberts on his eighth La Solitaire climbed through the fleet to lie eighth during the first day but he lost places and time on the beath to the Channel Islands and crossed the finish line today in 16th, 2 hours 32 minutes after stage winner Quiroga.

Dolan, who was fifth overall last year, crossed nearly an hour after Roberts – who wins the VIVI Trophy prize for the leg. On the General Classification they lie 17th and 18th, Dolan leads Roberts by two tiny seconds after six days and 14 hours of racing.

Roberts who restarted, recrossing the start line as he thought he was one of the sailors recalled for jumping the start gun, reported, “To be in the top 10 in the first half and then drop is painful. I know I can battle in the front of this fleet. I feel I have all the pieces of the jigsaw on the table and right now I am struggling to put them together.

“There are two more legs to go. I pushed hard on the reaching section and was really quick and then had a bit of a break before the Raz Blanchard and after then in on the rocks it was totally full on. I could tell I was bleeding places and did not know why. I played around with my set up, I was not overtired, I was never backing off. I have struggled a little bit in the breeze. Unlike on the first leg the breeze was very gusty and so unlike on the first leg you could not autopilot it.“

And Dolan rued his poor starting. He said, “I made a mess of the start and then for the first 12 hours I was not that good and from there it was generally a rich get richer situation. You forget how harsh the English Channel is when you end up nearly a tide behind. You get further and further back and when the tide changes from the west you get worse.”

Twenty-two-year-old Spanish rookie Pep Costa sailed an assured stage to finish 19th on Cybele Vacances Team Play to B, he said, “On the first leg I had big problems and so on this leg I just wanted to be better. I think it was a good leg for my first La Solitaire du Figaro but the hardest I have done with the least sleep. I am very happy in the way I sailed and in the way I stayed in touch with the fleet. I made a few mistakes, for example on the first night I put the spinnaker down a bit too late. It was so dark I did not see the rest and so I was late on to the gennaker.

“I lost touch with the little group I was with. In general, I would like to start better than this but I find starts difficult. I managed to do a good tactical move at Alderney and caught up with a different group, I went north a bit and the other side of Alderney and got a good shift and less current. It was a complicated option and so I am happy with that choice and then I stayed with the fleet and sailed well against that group.

“I am happy because I learned from Will Harris to just get five minutes here and there and I did that and I was good at deciding where the best bits to sleep at were. I am most happy that I am better on this leg than the last, that was my aim.”