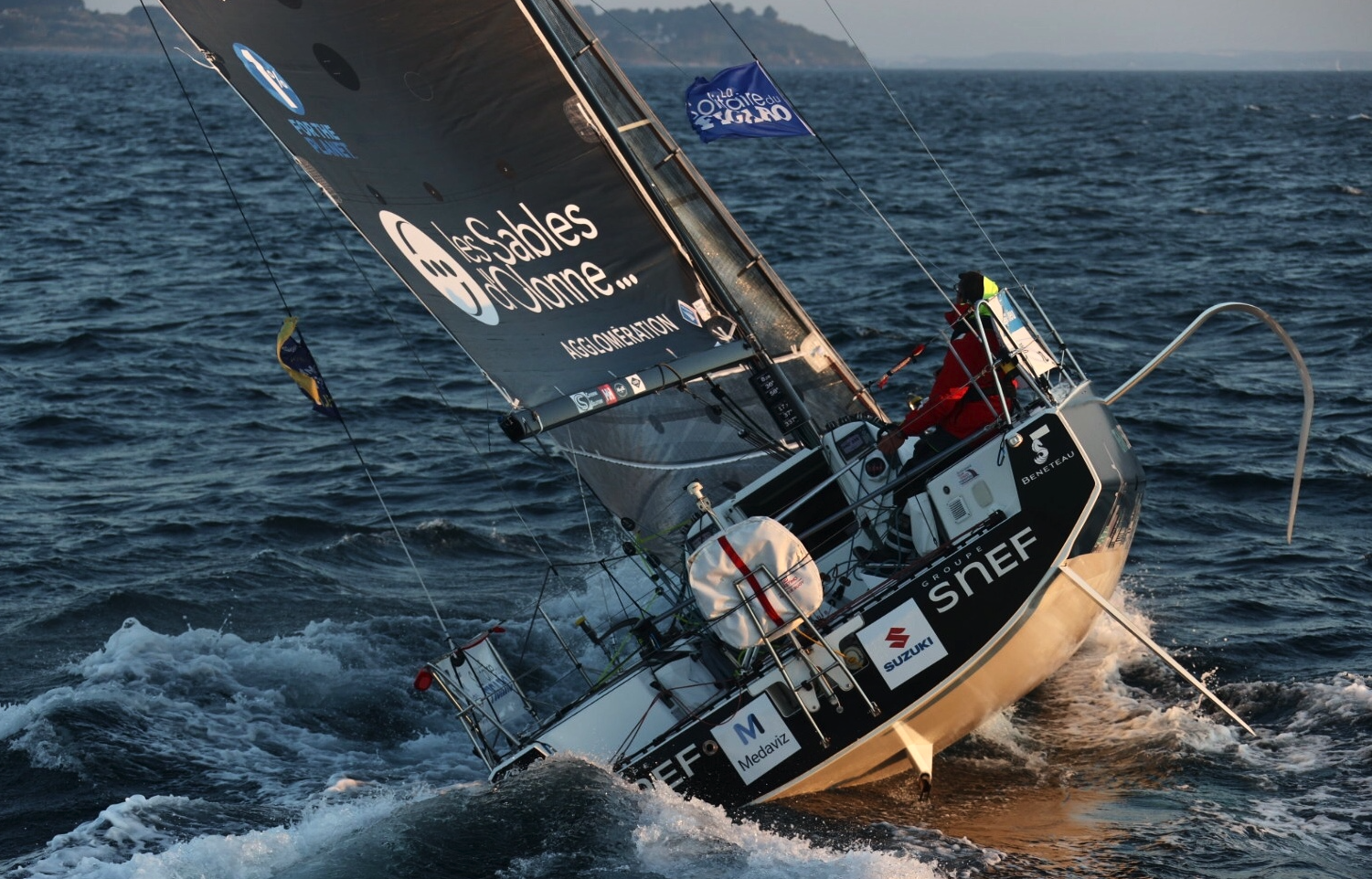 With less than 100 miles to the finish line of the 627-mile race course that makes up Stage One of the 52nd La Solitaire du Figaro, Xavier Macaire’s (Groupe SNEF) lead has narrowed to just 1.8 miles.

However the 40-year-old has done an excellent job of covering the fleet. And when the front-runners settled down after tacking to clear the southern edge of an exclusion zone, Macaire was back up to his earlier 2.8 mile margin. At 1800hrs CET he was leading a cluster of tightly-packed boats holding a similar line along the bottom of the zone.

This is Macaire’s 11th challenge, making him one of the most experienced skippers in the class. He has proven that he is able to handle the enormous emotional pressure associated with leading such a closely packed fleet for a long period. Last year he led around the Fastnet Rock and maintained a cool approach to win stage one of the race, albeit by a margin of less than 100 seconds.

It will be a confidence boost for the Irish skipper if he can maintain this position into the finish – he was third round the Fastnet Rock on the opening leg last year, but slipped to 12th by the finish.

In general, the heavy upwind conditions after the turning mark off La Corūna in northwest Spain have favoured the more experienced skippers. However, Gaston Morvan (Bretagne – CMB Espoir) stands out among the rookies in 12th place, 7.1 miles off the lead and 1.8 miles ahead of Alexis Thomas (La Charente Maritime) in 16th and Charlotte Yven (Team Vendée Formation) who is 0.3 miles further back in 17th.

British sailor Alan Roberts (Seacat Services) climbed to 17th during the day, before slipping back to 21st. Further down the rankings, Italian/American skipper Francesca Clapcich (Fearless – State Street Marathon Sailing) was one of the western most skippers approaching the first exclusion area and therefore among the early boats to tack. At 1700BST she was in 28th place, but well ahead of the tail-enders.

The nature of this very tight one-design racing means the front-runners are all likely to follow a similar strategy to the finish. However, others will be prepared to take strategic risks in the hope of jumping further up the rankings.

This evening, as the fleet tacks between two exclusion zones, the wind will swing left and ease to only 8-10 knots for a few hours. A 17-22 knots north-easterly breeze is then expected to fill in and take the boats to the finish line.

For the results, see: https://www.lasolitaire.com/en/rankings/live