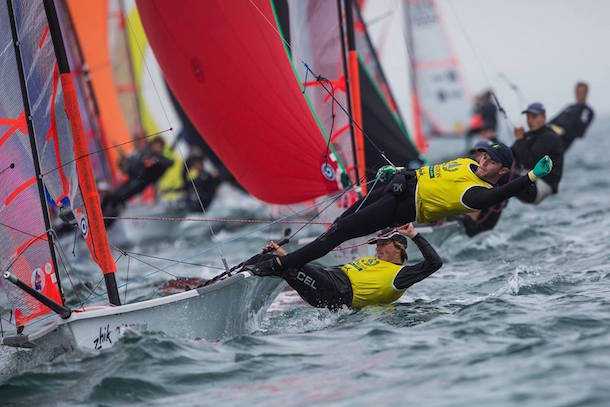 Media information from the 29er Worlds in Wales plumbed new depths – it was impossible to find any reports. Fortunately, two sources close to Australians who were competing have posted some basic details:

Congratulations to 2015 AUS Youth Champs Kyle O'Connell and Tom Siganto on winning the Int 29er Class World Championships in Pwllheli, Wales, GBR. The championship came down to the last race and one point. In fact Kyle O’Connell and Tom Siganto still weren’t sure they had won when they arrived ashore. As Siganto explained, “we were pretty nervous coming into today, and we knew we had to do well the last race to keep the lead; a couple of things went wrong the last race, we made some mistakes, but we managed to keep it.” O’Connell and Siganto also claim the top youth team. John Cooley and Simon Hoffman also finished in the top 10 in 6th. Well done all!

This was a record size women’s fleet for a 29er worlds within an almost record open entry list.

The finals series was a tough fought affair between teams from GBR, Spain, Australia and New Zealand for places 2-7. A huge congratulations to new World Champions Mimi El-Khazindar and Emma Loveridge (GBR) who qualified for Open Gold fleet in tough conditions, securing the women’s title in the process.

This Australian result is made more special by Tash being the youngest girl in the competition, the team participating in their first international campaign and the fact that the pair only met 17 months ago.

With a race win in the open championship to demonstrate the girls' potential and a number of lessons to come home and practice, the team is already preparing to fly home and continue training in preparation for the domestic season and plan their next international adventure together.

But for now it is time to wash, polish, service and store the new overseas race boat in order to be ready for their impending return.

The Objective Future Champions Program is enormously proud of this achievement and our association with a wonderful team from the outset. We also want to acknowledge the efforts of the team's training partners and fellow Future Champions Ashleigh Coles and Juliet Costanzo who push hard each week in training.