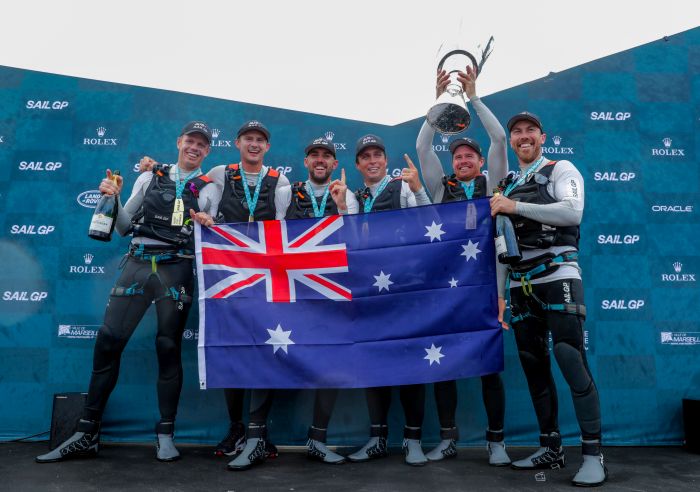 Team Australia celebrates its win in the inaugural SailGP season.

Following a successful first season that included the launch of the world’s fastest sail racing boat, the F50, SailGP will return to Sydney Harbour in 2020 for the Season 2 opener. Defending champions Australia, led by Tom Slingsby, prepare to compete against six other national teams all racing in the one-design boats.

As well as the addition of two new national teams, Denmark and Spain, we can also expect to see exciting design and engineering updates to the F50 fleet in Season 2.

Revolutionary new modular wingsails are currently under construction, and will be fitted to the entire SailGP fleet prior to the 2020 San Francisco event. A first-of-its-kind system, the wing is comprised of sections that can be assembled in varying lengths – initially from 18 to 24 meters with the future ability to go to 29 meters – to enable the F50s to compete in a greater range of weather conditions.

We spoke to SailGP Team Australia Wing Trimmer and world renowned sailor Kyle Langford, to hear what we can expect from the new wingsails in Season 2.

“We want to remain at the forefront of the sport, and technology is key to that. The F50 is a one-design class, meaning that all boats are exactly the same, however, innovations are constantly being applied to the fleet by our team of engineers to ensure the boats are at the cutting edge of technology and speed,” said Langford.

The new wings will enable the F50s to compete in a wide range of weather conditions. The smallest wing configuration, at 18 meters, helps to make the F50 more manageable but faster in stronger winds. By combining all four of the modular wing sections, the wing expands to 29 meters high, five meters taller than existed for Season 1, and will improve performance in lighter winds.

“The new wingsails are going to enable us to sail in a wider spectrum of wind speeds and conditions, with the aim to be able to competitively race in winds from 4-30knots. Our fans can expect even faster and more exciting races in Season 2,” said Langford.

“We have also been able to make huge weight savings, with the removal of rigging and cables inside the wing structure. This is going to improve the power to weight ratio of the boats, which is going to help us to sail even faster in light winds.”

Langford and the Australia team are currently preparing to compete in SailGP Season 2, which will be returning to the iconic Sydney Harbour for the first event on February 28 and 29.

“Winning our first event in Sydney Harbour in Season 1 will go down as a career highlight for me and I can’t wait to return to Sydney again with the team, to compete in the Season 2 opener. There is something very special about racing in front of our friends, family and our country, and we are hungry to win again for Australia,” said Langford.

Tickets for the Sydney SailGP are already selling fast on SailGP.com/Sydney, with Australian fans hungry to see the action. Packages that are available include:

Asked on what spectators can expect from Sydney SailGP Langford said, “It’s pretty awesome that people have the option to party out on the water or from Shark Island to witness some of the top athletes in the sport race the fastest boats in the world. We hope to see Aussies dressed in their green and gold cheering us on.”

Tickets are available now at SailGP.com/Sydney, with AUD$2 from every ticket sold going to SailGP Inspire – SailGP’s youth and community outreach