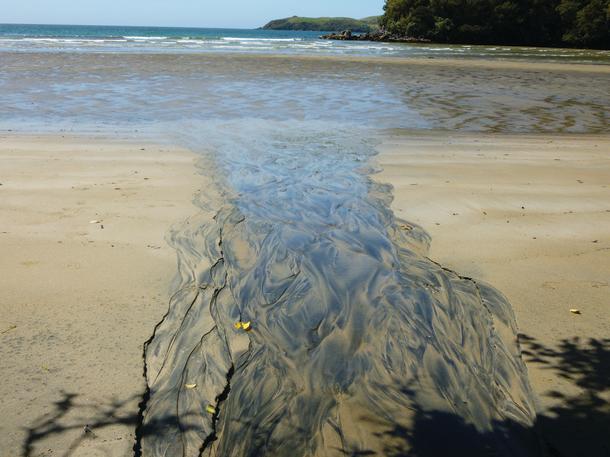 “Look here busters, I am looking for a good place to land,” I explained to three seagulls screeching over a cockle. “If this salty washing machine lets me,” I clarified, as much to myself as to the seagulls who were regarding me with reproach.

I poked the dinghy into various kelp-ridden swirls. There were a few moments when I had to throttle away from impending rocky doom. OK, that is a bit dramatic, but eventually the gulls and I agreed on a spot.

I cut the outboard, tilted its leg out of the water and grabbed onto the oars. There was a massive surge and I waited patiently for the next set to pass before paddling furiously and landing as safely as I knew how.

Shipping the oars, I scrambled to the bow and leapt out. As I hauled the dinghy up the sensual plaits of a stream, I raised a thumbs up back at Sea Guide.

I could just make out the one, to whom I am hitched, peering at me through binoculars. He gave me a tinsy wave. Remembering his earlier remark served only to tighten the knots in my stomach.

“If you weren’t so busy multitasking you’d be able to do one thing well,” he had said. That stung. We were as closed as prodded shellfish.

Living in close quarters, it is hard at times to prevent frustrating entanglements. The other person’s quaint idiosyncrasies become annoying when you are cramped up by short spells of indifferent weather. Nothing strains a relationship more than being cooped up 24/7, in the rain, running low on essentials, too rough to go ashore, too frayed by cabin fever not to go ashore.

But here, on the beach, was stillness. Slots in the clouds let though slithers of sunlight that played golden on the wave tips. I stood against the wind, testing my strength with the sun’s warmth on my back, then secured the painter with a clove hitch to a convenient tree stump. Painter. Rope. Same thing. Not some Van Gogh-like character.

I only know five sailing knots: the clove hitch, bowline, round turn and two half hitches, figure-of-eight and fireman’s coil. When I say ‘know’, well, er, I have barely mastered the bowline: first the rabbit cannot find the hole
and then he falls out of the tree.

But this repertoire of knots suffices for most jobs I do around the boat. Bowlines are good for joining two bits of string together, especially if the join is for something temporary like a courtesy flag. A bowline does not slip or loosen, but is easy to undo.

I use a round turn and two half hitches to attach stern lines to trees and put a figure-of-eight in the end of sheets to stop them slipping through the block. A trick you only forget to do once.

Being a tidy person at heart, I like to coil up our mooring lines and sheets and hang them up with an elegant fireman’s coil.

A goal of mine, rarely achieved, is to learn one new thing every day. That is how our petty friction had started. Sigh.

I turned off the outboard fuel, closed the air vent screw and took a few strides down the beach, then returned and patted the outboard. “Good friend,” I said. I was determined to learn how to drive it by myself.

I strode purposefully down the egg-speckled pebble beach, swinging my bucket. Up ahead, a grandfatherly soul threw a stick for his mongrel dog. It leapt yapping into the surf, biting the waves, searching, searching, until triumphant, it romped back to its master. Go again, it barked. I knew who would tire first.

I untied the granny knot on my rain jacket hood, felt the salt wind blow through my hair and squinted out to the bleak sea. Out there, beyond the rolling combers, beyond the dull roar, lay our voyage. Distant lands waiting to be explored.

A wave nibbled at my feet and sucked away the cool sand. I reached a rocky point and filled my bucket with blue mussels, then strolled back following the edge of the tide line. Wind tumbled white froth along the shore, stopped and went on again. Crabs dug themselves into the sand as I approached, leaving wet excavated mounds.

Leg muscles made lazy by intermittent bad weather ached, so I sat for a while on a driftwood log, dug my heels into the pebbles and watched a lump of kelp tug in and out, in and out. Warm. Bountiful. Wild.

After a few minutes I retrieved the dinghy, turned on the fuel and opened the vent screw. I dragged it out until it floated then, with a girlie whoop of success, clambered in and rowed out past the breakers. I switched the doohicky to ‘choke’ and pulled the starter cord. No go. I pulled the cord again. The outboard fired then spluttered out. I switched the doohicky to ‘run’ and pulled. No go.

Water swelled around me, propelling me sideways in a sudden fizzing whirlpool. My eyes widened with worry. I was momentarily out of control, but I managed to row hurriedly and escape the mischievous rollers.

The outboard has an ongoing ignition problem. Capt. Hunk has a knack for starting it. He pulls the starter cord energetically and forcefully, making sweat to break out on his brow and sometimes also making the two-stroke actually start, but habitually not.

I mimicked these actions, as best I could and succeeded only in wrenching my shoulder and upsetting the bucket of mussels. I gathered my wits and the mussels and decided that I must still have the choke on, because, you see, the thing is old, the markings have rubbed off and I cannot tell ‘choke’ from ‘run’ except by memory, which is vaguer than the markings.

Heart beating, I felt alive and warm, but chuffed as meatballs by the time I had slogged my way back to Sea Guide.

Tall and lithe, strong legs masculine with sun-bleached hairs, Capt. Hunk eyed my approach and reached down to take my bucket with a forearm muscled by sailing and a smile that threatened to jump off his face. It is true that he looked happy, although I have seen him look happier when his favourite rugby team wins away from home.

“Yip.” I skipped aft to tie up the dinghy on the cleat and he followed, nuzzling into my back, pulling strands of my hair through his fingers and smooching my neck. “I missed you, Cookcake,” he mumbled.

I turned around and slid my fingers into the front pockets of his shorts. “Me too.” I had been away all of three quarters
of an hour.

“Why do women knit?” I asked. He chuckled. He had heard the joke before.

“To give them something to think about while they’re talking.”

“Sorry I called you impractical.”

“What’s wrong with the outboard?”

As lesser man would have mansplained how I, a female could benefit from the male’s superior knowledge and said “did you turn on the fuel? Open the vent? You’ve flooded it!” But not my man. Our antsyness was gone. We sat on the gin seat and looked and thought. Neither of us spoke for minutes on end.

I left him radiating mellowness rays and went below to shell mussels and thaw fish stock. I slumped against the galley sink and let my mind unravel further. Slowly it dawned on me that the only truly important thing in this mess is our marriage.

His infectious energy, his mechanical knacks, his willingness to let me do my own thing, all put colour into my life. I zip around, multitasking, ticking off ‘The list’ that exists in my head: things to do, gather, clean, cook. While he, puffed with resentment that he does not have the same list, is indifferent to what is on the list; with little notion that the list is invisible, mine alone and that he is not a mind reader.

Ergo, it is not clear-cut. I shut my eyes and breathed; letting the fumes of steaming mussels focus my mind. Fish stock, once frozen, takes warmth to thaw.

A while later, I glanced out a porthole and noticed a jet ski approaching. Jet skiers: sea fleas. I mouthed at him, “buzz off you pesky nuisance.” Why did he have to come so close? Virtually alongside us. Ooh, I see. He is towing our dinghy.

“Who tied up the dinghy?” Capt. Hunk asked.

Well, ask yourself, I thought and fought the urge to snap: there are only two of us on board and if it was not you, it must have been me.

I bit back my excuse and scurried topsides. Clutching at his arm to steady myself, I blubbered, “I’m sorry. I’ve learnt from this mistake and won’t repeat it.”

He hugged me, hard.

No you don’t. Do not let me off the hook. Tell me off.

“Sssh,” he said and went to grab the painter from the amused jet skier.

I finished the day with a small thought, which I shall leave you with now. It’s this: the cruising life draws two people closer.

You cannot walk away. Slam doors. Go off in a huff. You have to stick around. Take the strain. Work it out. That forms a bond as strong and secure as a round turn and two half hitches entwined as tight as a constrictor knot. ≈