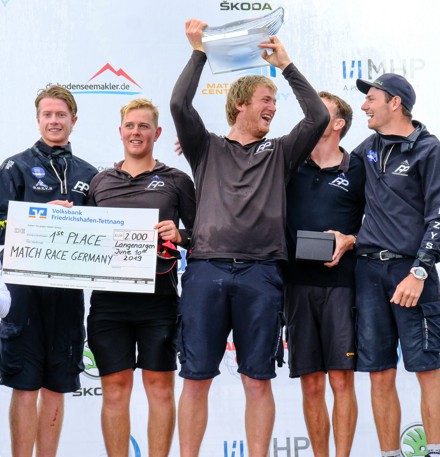 Langenargen, 10 June 2019. Five days of world class sailing, a big Whitsun Festival in Langenargen’s Gondola Harbour, ten teams from eight countries and more than 20,000 spectators at the German summit of duel sailing on Lake Constance: The 22nd edition of Match Race Germany ended on Whit Monday with a spectacular duel in front of enthusiastic crowds.

What a thriller it has been over the full distance of five matches with the celebrated victory of New Zealand’s Knots Racing Team of Nick Egnot-Johnson in front of an enthusiastic crowd. The Kiwis dethroned the defending champion Eric Monnin and his Capvis Swiss Match Race Team by 3:2 in a high tension final.

Helmsman Egnot-Johnson said: “The conditions in the final with increasing winds and a thunderstorm did remind us a bit of our home waters in Auckland. We had so much fun out there and it’s been a privilege to sail against the defending champions. We would love to be back next year.”

Maybe 20-year-old Nick Egnot-Johnson, who is not even half as old as two-time Match Race Germany winner Eric Monnin (43), also has a bit of “Mum Magic” adding to his talents. The mother of the young helmsman, an American by birth who has long been at home in New Zealand, won silver in the 470 dinghy at the 1992 Olympic Games and was the first woman to helm an America’s Cup yacht as part of the all women campaign in 1995. Now it’s her son eying at an own Cup career.

“One day we would certainly like to compete in the America’s Cup. Today we are really proud to represent our home club, the Royal New Zealand Yacht Squadron.” Which is the current defender of the America’s Cup as Emirate’s Team New Zealand’s homeport.

How big the role of sailing is in Egnot-Johnson’s hometown Auckland can be described by a number: On average, there is one boat for four people in the City of sails. And: Auckland has more boats registered than cars. So it seems hardly surprising that new shooting stars from the “land of the long white cloud” are constantly pushing their way into professional sailing.

Sabine Brugger said: “I enjoyed my premiere as PRO. All sailors acted respectfully and professionally, making our work easy.”

Which was also confirmed by Eberhard Magg, who launched Match Race Germany in 1997 and together with Event Director Harald Thierer and their Match Center Germany team organize the renowned event since more than two decades.

Magg said: “This year again we had a great mixture of experienced skippers like Eric Monnin or Dejan Presen, but also the young blood from Denmark and overseas. I was particulary impressed by the strong nerves of the Swiss, the high-quality premiere of the New Zealanders and the clever starts of Max Gurgel’s team from Hamburg. Our concept to offer a career stepping stone to future stars of sailing will certainly be maintained.”

Which is why talent like Will Boulden from Australia this year will again set course for Langenargen in 2020. The Royal Freshwater Bay Yacht Club’s young helmsman from Perth, Australia, who had been eliminated in the quarter-finals after having secured a brilliant second place in the qualification, said: “We had participation in Match Race Germany on our wish list for at least 18 months now to give one of the world’s premier match race events a go. We are striving for a professional career. Our goal is to end up in an America’s Cup team or something in that area.”

After the German Tour stop and a short summer break, the international Match Race Super League will be continued with the Detroit Cup in the United States and the Aircarlin New Caledonia Match Race in Noumea.

After the first three regattas of the 2019 season, Poland’s Lukasz Wosinski (HRM Racing Team) leads the Tour rankings ahead of his compatriot Patryk Zbroja (KS Dobra Marina Szczecin). Both have already won a regatta of the Match Race Super League this year but had to admit defeat on Lake Constance to better teams, which now are putting pressure on the table leaders with their success in Germany.

After Match Race Germany Egnot-Johnson and Monnin jumped up the rankings to third and fourth, just behind the leaders.