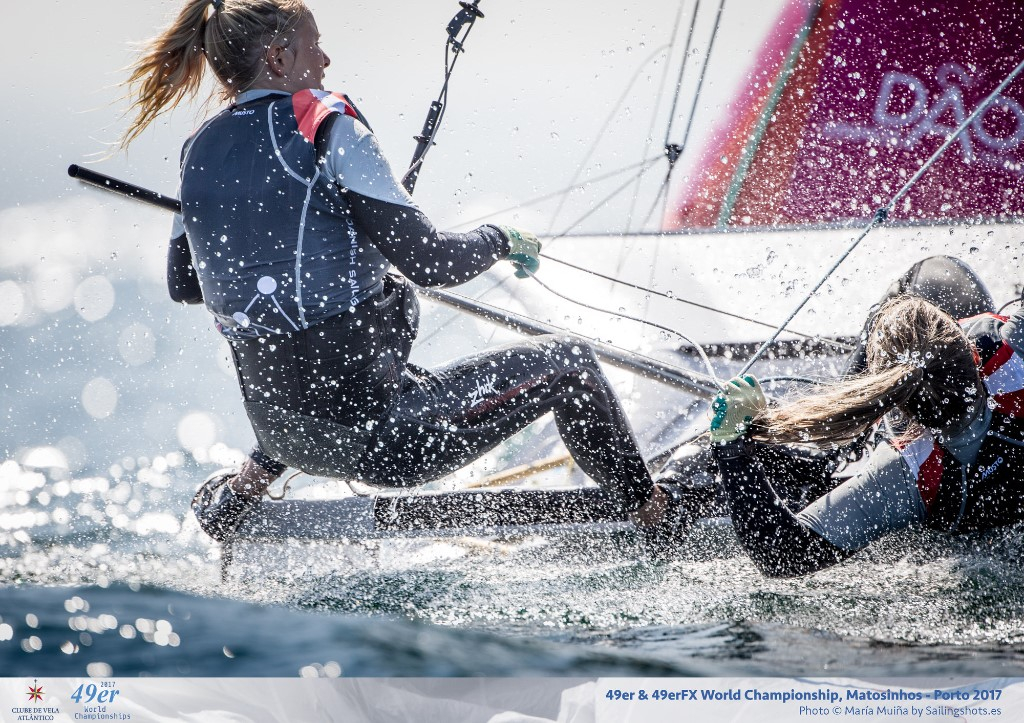 Porto, Portugal (31 August 2017) — For four years, three teams have worked together as training partners for the benefit of them all, even as they battled at every event for gold and glory in the 49er FX, the women’s Olympic skiff class.  They’ve fought over World and European Championships, they’ve fought over World Cups, and their battle for Olympic Gold wasn’t over until the final leg of the final race in Rio De Janeiro – and all three teams won medals.

Meech says she was surprised with their blinding 1,2,1,1 performance in 15-20 knots of Portuguese Trades and combined seas of 2 metres.  “We’ve always liked windier conditions, but still we were surprised with our performance in such a tough fleet without the best starts” said Meech, who runs the front of the boat while Maloney helms at the back. “We were aiming for good, consistent results to finish out the qualification rounds, but Alex and I were really in sync with each other and sometimes that can be the most important thing.”

Maloney and Meech showed an incredible turn of speed on every downwind run in the sporty seas, but still Meech was a bit surprised with their speed advantage over nearly every other team in their split fleet.  “Normally we’re in the front with the top boats upwind, but downwind was really tricky today just trying to deal with the big waves,” said Maloney.

Due to the fleet splits, the two Kiwi standouts haven’t yet faced Grael and Kunze at this Worlds, but they’re sure that the Brazilian gold medalists – along with Denmark’s Hansen and Iversen – will bring their best to the 20-boat Gold fleet tomorrow morning.

“We’ve trained with the Brazilians quite a lot over the past four years and with Katja and Jena as well, and whenever we’ve been sailing together with them, we’re always pushing each other to the edge,” said Meech.  Hansen agreed: “We’re fast in part because they’ve helped to make us fast, and they’re fast because we’ve helped them too,” said the Danish skipper.

Past World Champions and Rio Olympians Tamara Echegoyan and Berta Betanzos suffered in the big breeze – a surprise to many who’ve followed these powerful, experienced sailors for years.  Several ragged capsizes made it a long, wet day for the Spanish duo, but they held on to 13th place, escaping the gold fleet cutoff of 20.

As the women’s fleets returned to the Club de Vela Atlantico, the breeze picked up yet another notch, settling in at a brisk 20 knots from due North.  Capsizes, gear failures, and even seasickness beat up numerous crews, but none of it fazed newly crowned European Champions Dylan Fletcher and Stu Bithell at all.  The British Olympic skipper and his new-for-2017 crew (a former Olympic medalist in the 470 Class) couldn’t put a foot wrong today, taking all three races on the Alpha course and carrying a four-point lead into the Gold Fleet action tomorrow morning.

It was moving day for Diego Botin and Iago Lopez, the young Spanish duo notching a 2,3,5 score to overcome yesterday’s UFD and move into second place overall – their best ever current position at a Worlds.  For Botin the position is good but he knows it doesn’t mean much, especially with two boats tied with them on points.  “Everything will be decided tomorrow and Saturday, we’re basically starting over now,” said Botin, who nearly threw away Race 5 with a capsize at the top mark.  “I dropped the tiller at the last tack at the top mark so we flipped, but we were lucky the wind was so strong and so many of the other boats had problems,” said Botin.  Lopez explained that the runs were extremely tough to handle; “The waves were nasty downwind, requiring big eases of the gennaker every five seconds or so,” he said.  “Also finding a flat spot for the gybe was rare, and that’s why you saw so many teams overstanding the bottom marks.”

The strong German sailors we wrote about yesterday continued to excel in the big breeze, with two veteran and two youth teams advancing to Gold Fleet at the end of the day – double the number of any other nation.  While the success of Schmidt/Boehme (3rd) and Heil/Ploessel (6th) after Day 4 surprised no one, youth sailors everywhere should rejoice to see two young German teams advance to the Worlds Gold Fleet for the first time.  Nils Carstensen (22) and Jan Frigge (23) pulled an ultra-consistent 8,7,7 in the ultra-chaotic conditions to take 15th place after 6 races, while Jakob Meggendorfer and Andreas Spranger squeaked through into the semi-final round in the last available position – 20th place.

The 20 and 21 year old phenoms seem to eat big breeze for breakfast – they showed poise and speed far beyond their years in Kiel when the winds came on at the European Championship, and they continued their heavy weather excellence today in Porto despite several capsizes and a major equipment issue.

“Strong wind is so fun, but we didn’t expect to be so fast against some of these teams,” said Meggendorfer.  And fast they were; the duo recorded some of the highest speeds on the water today, recovering well from their capsizes to advance to the next round.  “Our coach says boat speed is king, so even if we have some problems, at least we have that!” said Spranger.