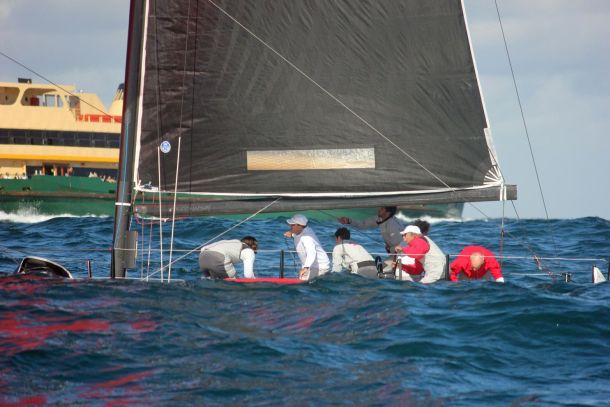 The Kiwis prevailed in round three of the MC38 Australian Season Championship, the Winter Regatta staged by Middle Harbour Yacht Club in lighter, showery conditions at the four way junction just inside the sandstone cliffs of Sydney Heads.

John Bacon’s Dark Star, winner of the Autumn Regatta, and Howard Spencer’s Menace, winner of the opening Summer Regatta, were in a Trans-Tasman stalemate going into the final race on Sunday June 21, 2015. Then Menace blew the start. The race committee led by PRO Steve Tucker called them back and at that point the regatta was Dark Star’s for the taking.

Bacon and tactician Cameron Miles blanketed the New Zealanders who figured they had nothing to lose and went for the split from Dark Star at the last gate. The Kiwis’ numbers came up and they and got inside the Royal Prince Alfred boat at the final top mark to take out the series by two points.

Menace’s mainsheet trimmer Alistair Gair said it was a regatta of two halves for the Royal Akarana Yacht Club team. “Dark Star sailed beautifully yesterday, and we pulled it together today. The biggest thing for us was getting out of the blocks well… excluding the last race. Will [Tiller] did really well on tactics, he held it together nicely. Today could have been quite dicey if you were caught on the wrong side. All-in-all we are pretty happy; it was a nice way to finish.”

On the head start they gave Dark Star at the start of the last race he added, “We got a little buried at the start, we did well to get back in it.  We figured we had nothing to lose opting to split, lucky the call went our way.”

Miles agreed Dark Star’s crew struggled in the cold 6-8 knot sou-wester. “One minute you were tipping over and the next your jib was inside out. It was very hard for the steerer. We had our chances in that final race and we missed out. You can come from behind in those conditions… it’s such close racing in this class,” Miles said, shaking his head.

Leslie Green’s Ginger, the current class national champion, had a much better day and finished third on the podium. The older owner found the slop at Sydney Heads hard going and Ginger’s tangle with a starboard tacker in the CYCA’s winter fleet was ill-timed, but overall results capped off by a win in race seven added up to a better day for the CYCA crew.

America’s Cup sailor and six time Olympian Colin Beashel stepped in for regular David Chapman to call tactics for the winter series, his first time on an MC38. On the McConaghy built class he reckons, “It’s good fun to sail a boat that’s exciting. It’s like a big sports boat and I have wanted to get back into that style of racing. Today was smoother, which made it a bit easier for Leslie. There was a little less breeze and it wasn’t quite as puffy or choppy. It’s a matter of getting used to sailing on the harbour again.”

Green clearly enjoyed having Beashel on the boat. So will he be invited back? “Maybe…if Chappo does more work overseas. I didn’t yell at anyone today, though I did throw Richie’s [Allanson] radio over the side today,” Beashel chuckled.

The North Sails Boat of the Day was Menace.

The class association’s next calendar entry is the MC38 Spring Regatta in October however owners have requested President John Bacon and technical adviser Richard Slater look into creating an additional regatta between June and mid-October.