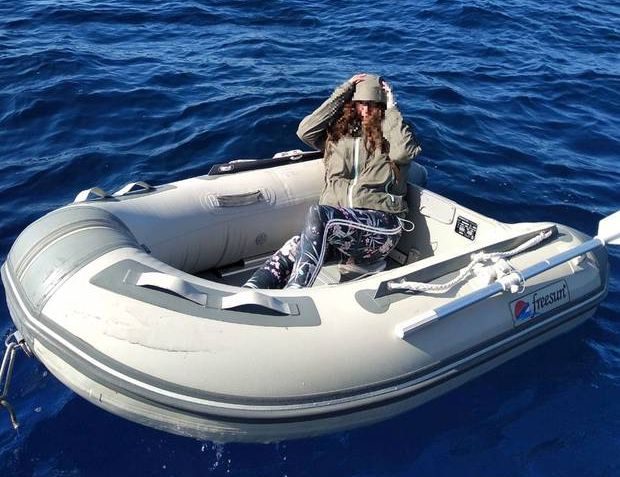 Kushila Stein spent 37 hours floating in a dinghy in the Aegean sea after drifting away from a yacht near Folegandros in the Cyclades islands. Photo / Crete Live.

“I still have one lolly left mum.”

They were the first words Kushila Stein shouted through the phone to her relieved mother Wendy after she was rescued from floating on the Aegean Sea near Greece for 37 hours.

The 47-year-old Warkworth woman had been helping a British man named Mike deliver a yacht from southern Turkey to Athens in Greece. They were three weeks into the trip and moored near the Greek island of Folegandros and she decided to row the dinghy 50 metres ashore and walk to the highest point of the mountain.

She texted him at 4.30pm on Friday to say her phone battery was low and she was heading back, but on her return she lost an oar overboard and the winds pushed the boat away from the Rival 34 sailboat.

When she hadn't returned by 5am the next morning, Mike went looking for her and when there was no sign of her or the boat he raised the alarm at 8am. A search and rescue operation with six Coastguard boats, a helicopter and plane was launched at 11am.

Wendy Stein, also from Warkworth, told the Herald her daughter had lost her oar trying to row the short 50-metre journey back to the yacht and the winds had pushed her off course.

Her daughter was an experienced sailor who had trained others in sea survival, so tried everything she knew to keep herself alive. After her first night lost at sea, she wrung out her socks and hung them over the boat to dry so she could put them on at night when the temperature dropped.

Kushila had no water, but digging into her day pack she found a handful of boiled lollies which she rationed out during the 37 hours she was adrift.