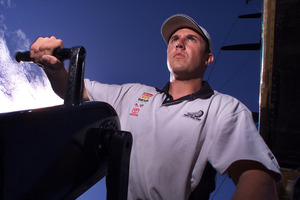 Marshals have been authorised to seize America's Cup champion Oracle Team USA's prototype boat in response to a lien filed by New Zealand sailor Joe Spooner, whose contract was terminated in January.

The warrant was issued late Friday by clerk Richard Wieking of the US District Court in San Francisco. The boat hadn't been seized as of mid-day Saturday, Oracle Team USA spokesman Peter Rusch said.

It's believed the boat is still at Oracle's base at Pier 80 in San Francisco. The syndicate, owned by software billionaire Larry Ellison, is in the process of moving its operations to Bermuda, where it has chosen to defend the America's Cup in 2017.

Spooner sued Oracle Team USA last month, saying his contract for US$25,000 a month was terminated without cause. He was a grinder with Oracle Team USA during its America's Cup victories in 2010 and 2013.