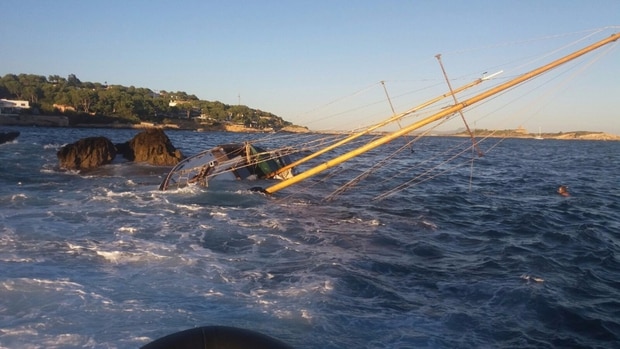 The 10m sailing boat was wrecked after being smashed against rocks off the Majorca coast. Photo / Solarpix.com.

A Kiwi sailor has spoken of his heartbreak at losing his floating home of seven years in a mystery incident off the coast of Majorca.

Jonny Smythe, 43, returned from a two-hour trip into town to buy glass for a door he was repairing as a favour for a friend, to find his 10m sailing boat being smashed against rocks.

He rescued what he could – salvaging his wallet, electronics and a sextant before it became too dangerous to continue as the wind increased and waves battered the vessel – but was otherwise left with just the clothes he was wearing.

Last night Smythe, who earns his living as a carpenter, told how he was trying to get his life back on track “one day at a time” after being left saddled with heavy debts by the loss of his yacht which was named La Maja after Spanish artist Goya's masterpiece La Maja Desnuda.

The New Zealand-born sailor, who moved to England as a child said: “It's not an understatement to say my life has been turned upside down. No pun intended but I don't think it's properly sunk in yet.

“La Maja was my permanent home for seven years from September 2010 when I bought her in Aberystwyth, West Wales, till I lost her on September 11 2017. Everything I'd accumulated in that decade, apart from the few things I was able to salvage in the aftermath, went down with the boat, my clothes included.

“I was left with just the shorts I was wearing. The clothes I'm in now have been provided by friends and well-wishers who have been fantastic. I'm sleeping on a British friend's sofa and just taking one day at a time while I try to work out my future because that's all I can do at the moment.”

Mystery surrounds the personal tragedy that has befallen Smythe, who had moored the boat off an island near the upmarket marina of Puerto Portals a short drive from Magaluf in southwest Majorca.