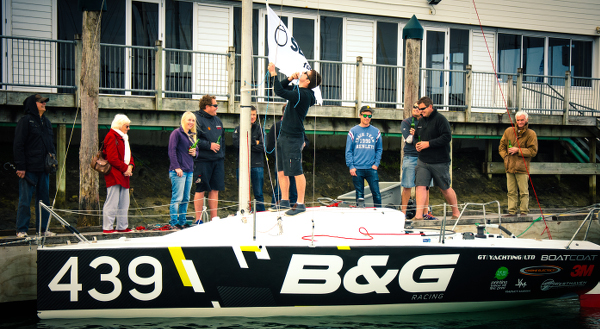 As the 2015 Mini Transat fleet depart France at the start of this year’s race, Kiwi sailor Cory McLennan has officially announced his intention to represent New Zealand in the 2019 Mini Transat. McLennan made the announcement at the official launch ceremony of his yacht B&G Racing on Friday 11 September, at Westhaven Marina in Auckland.

21-year old McLennan hosted friends, family, sponsors and media at the launch ceremony, where he thanked them for their generous support. McLennan said: “After a two month refit, I am proud to launch B&G Racing, and incredibly grateful to all my sponsors and supporters.”

McLennan made headlines in 2014 when he became the youngest person ever to compete in – and complete – the solo trans Tasman yacht race. The race, which took McLennan 16 days after his boat’s autopilot failed, showed a level of drive and commitment that belies his years.

McLennan commented: “The launch of B&G Racing marks the start of the next phase of my solo sailing career. The 2014 Solo Trans-Tasman Challenge was a great starting point, but now I want to go bigger… Bigger and smaller! The Mini 6.50 yacht is an affordable way to achieve my dreams of representing NZ in the world of solo offshore sailing.”

The Mini 6.50 is a racing class yacht designed specifically to take on the Mini Transat race. This solo trans-Atlantic race sees hundreds of competitors from around the world sail unassisted for over 4,000 miles, with only one stop along the way.

McLennan says he was inspired to follow his dreams of representing New Zealand it the world of solo offshore sailing by his hero, Sir Peter Blake. Born and raised in Greymouth on the West Coast of New Zealand’s South Island, McLennan had to overcome many obstacles to get where he is today.

“Where I grew up, farming was really the only career option, but I wanted to show the world that West Coasters can do anything,” McLennan said.

McLennan plans to cover as many miles in training as he can over the next four years, in the build-up to the 2019 Mini Transat. McLennan said: “I’ll start with local races and the PIC Coastal Classic, , then in 2017 I want to take on the Round North Island two-handed race. Following that, another crack at the 2018 Solo Trans-Tasman, before making the trip to France.”

McLennan is actively seeking sponsorship for his 2019 Mini Transat campaign. For further information, contact Cory McLennan on 022 624 3410 or corymclennan@yahoo.co.nz, or follow Cory on his Facebook page.