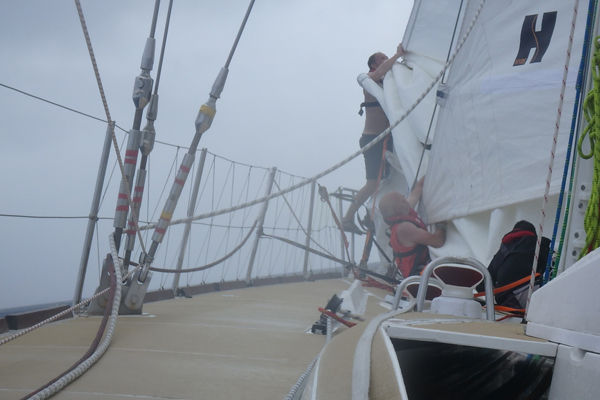 The fleet has cleared the Doldrums Corridor and is charging down the eastern coast of South America at a speed of 9 to 12 knots.

Visit Seattle became the sixth team to start the Ocean Sprint at 0616 UTC and will have to finish within 30 hours and 11 minutes to beat Qingdao which has recorded the fastest time so far.

The boats north of the Ocean Sprint are in a steady wind which should carry on down to about 10 degrees south.  Currently in eighth place, Mission Performance has been enjoying the conditions. Skipper Greg Miller said: “Beautiful sailing! We haven’t had a day like this in a long time, not since before the Canaries.

“Today was perfect, a bit of tacking through the night, but good speed on both tacks. Then later morning the wind came around slightly east of south and we were able to curve our course around to the south to stay inside the Doldrums Corridor.

“The next milestone on this trip is the equatorial crossing. With luck King Neptune and his cronies will pay us a visit soon. From there it is on to catch PSP Logistics and Clipper Telemed+, then to close the gap on Visit Seattle. We haven’t given up the fight and intend to keep fighting all the way to Rio!”

Race leader LMAX Exchange is 314 nautical miles from the finish as of 0800 UTC and is estimated to arrive in Rio late on Friday 25 September, with second placed Qingdao expected to finish a day later, as the following pack work to make up lost ground.

With only 20 nautical miles separating Derry~Londonderry~Doire, GREAT Britain and Garmin, at 1800 UTC yesterday, Garmin went into Stealth Mode. Stealth Mode is a tactical card, which each team can play to hide their position from the rest of the fleet for the period of 24 hours. The Race Office team still track the team's position every hour but their position is not displayed on the Race Viewer or sent to the fleet for the designated time. Stealth Mode does not have to be used by each team but can potentially give an advantage during a race, especially when the Skipper and navigators on board think they have spotted something in the weather reports that they think other teams may not have seen.

Garmin Skipper Ash explains their decision: “Right now you can hear me but you cannot see me as, for one reason or another, we have donned our cloak of invisibility and entered Stealth Mode. This will mean that our position will not be reported for 24 hours and any sneaky move we want to make will be hidden from our competitors.

“At the moment, our closest rivals are Derry-Londonderry-Doire and GREAT Britain. We have been 20 nautical miles from one or the other a lot recently and it's pretty hard reading every time we receive the position report, but we know that now is not the time when we are going to make massive gains on them. We are pushing very hard right now, but so are they, and tactically there is not much we can do when the wind conditions and currents are pretty much the same everywhere. We will keep on pushing patiently and hope that the tricky conditions up ahead will compact the group slightly.”

Teams automatically leave Stealth Mode once they are under 250 nautical miles from the finish line. During longer races, teams will be awarded two Stealth Modes. These can be used separately or back-to-back (for a 48 hour period during the North Pacific race).

As the front runners approach Cabo Frio there should be some interesting wind patterns that develop. So will Garmin’s tactical decision to enter Stealth Mode spring a surprise when they reappear on the Race Viewer at 1800 UTC?

Based on the current standings, the estimated arrival times for the teams into Rio are: