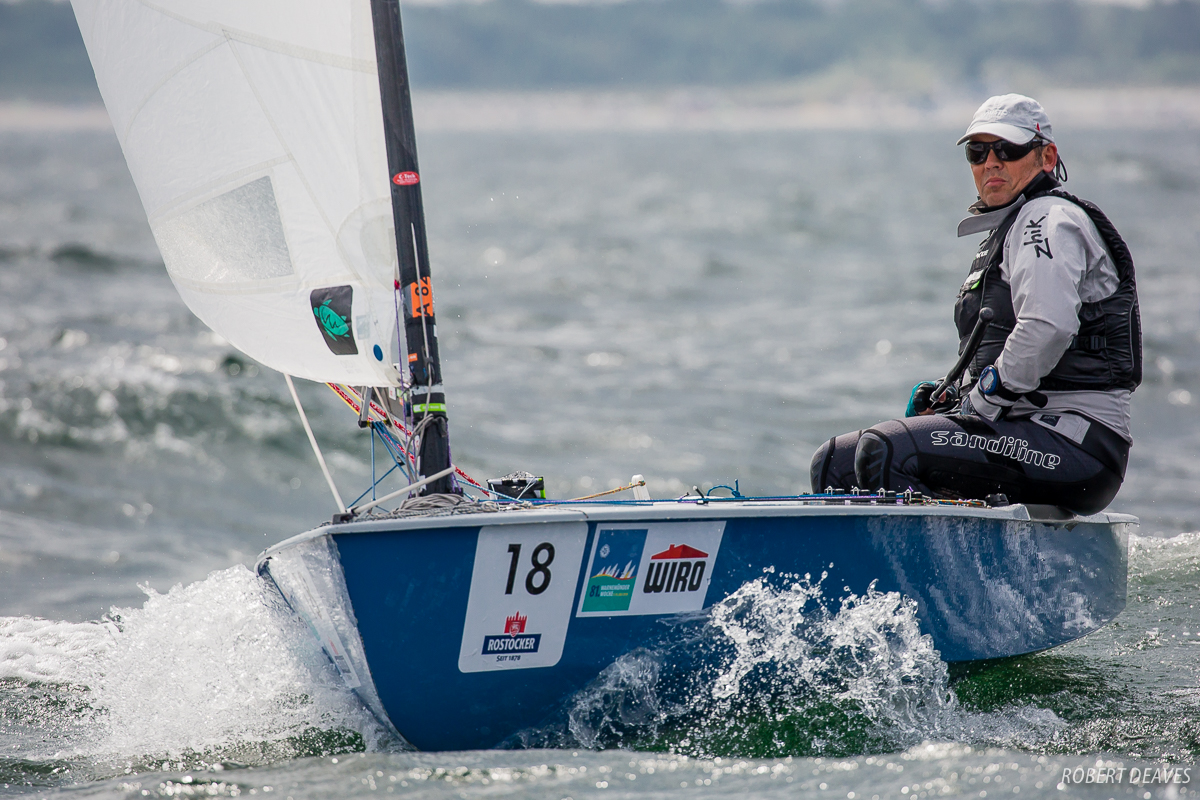 The largest ever OK Dinghy event ever to be held outside Europe begins in just over 10 days in Auckland, New Zealand. The Symonite OK Dinghy World Championship has attracted 110 entries and is being held at Wakatere Boating Club on Auckland’s North Shore from 7-15 February.

The fleet is about as diverse and deep as any OK Dinghy fleet in recent years with former world champions, Olympic champions and America’s Cup stars all mixing it up in the huge fleet. Some will be sailing their first world championship, while some are well past 20 editions.

As well as the large number of entries from Australia and New Zealand, there are also entries from Britain, Denmark, Germany, Poland, Sweden and the USA. Containers of boats have arrived from Europe and Australia and are being unloaded ready for racing to start next week. The New Zealand National Championship is being held over the weekend of 2-3 February as a warm up for the world championship, with racing beginning on the 10 February.

Simon Probert, the commodore of Wakatere Boating Club, and also competing in the event, said, “The excitement is really starting to build. The first of the containers and the competitors have arrived and some have even been seen on the water. Wakatere is thrilled at the response of the local fleet and around the world at the chance to sail in New Zealand. To have a fleet of 110, or possibly more, is a testament to the growth we have seen locally over the last 10 years and also the strength and growth of the international fleet.”

“The Wakatere OK sailors are some of the friendliest you'll meet anywhere and the team made sure we had people attending the OK Worlds and Europeans last year to talk to people about coming to New Zealand and joining us in our summer. We think that really made a difference in the numbers we have seen here for this regatta.”

“We have seen huge growth at our club where we have over 40 OKs registered with regular fleets of over 20 out for club racing.”

New Zealand has had its fair share of success at the World Championship over the past 55 years and has hosted the event on six occasions previously – though the last time it was in Auckland was 1986. Kiwi sailors have lifted the title a total of 12 times, but only one of these, Greg Wilcox, will be sailing this year.

Wilcox, who was world champion in 2002, and later, served as President of the OK Dinghy Association (OKDIA), commented, “The level in the class at the moment is just huge. I think it will be a struggle just to make the top 10 this year. It is awesome that the class has attracted so many top sailors from other classes but it just makes our work on the water that much harder, but also that much more fun. How many other classes can you say you are racing alongside Olympic champions and America’s Cup winners?”

“OKDIA has put in a huge amount of effort over the last 5-10 years to really build the class and make it attractive to those who want quality, fun and sociable racing, against some of the best sailors in the world. And we have so many really good boat builders these days, that it makes the fleet far more attractive and accessible than 15-20 years ago.”

“I think part of the success has been down to the excellent choice of venues. We went to Barbados, and then last year to Warnemunde where we had 140 entries, and then Bandol for the Europeans, which was an astonishing success. After Auckland we have events lined up in Marstrand, Garda and Lyme Regis. It doesn’t look like I will be retiring any time soon.”

One of the top local sailors is Ben Morrison, who won the National title two years ago. He said, “With its friendly locals, great weather, beautiful scenery, and high public interest in sailing, New Zealand makes a great venue for a sailing contest.”

He thinks the OK Dinghy is popular because it offers traditional racing and is more accessible than many classes.

“As the foiling generation concentrates on achieving ever longer and more stable flight, there is still a place in many sailors’ hearts for traditional dinghy sailing with its ever-fascinating challenges of tactics, fitness, and boat-handling, and with the simple joy of easily rigging a boat that can sail in almost any conditions, wheeling it into the water and just going sailing.”

Matthew Mason made a name for himself in the Whitbread Round the World Race as well as being involved in six America’s Cup campaigns, including four wins. He is looking forward to the upcoming championship. “Getting back into dinghies after 40 years of not sailing a centreboarder keeps it real. I love the camaraderie of this class, it is like nothing else.”

The strong Kiwi team includes three-time Olympian, Dan Slater, who has been in the class for a few years now but yet to win a major event. Also from the home club, America’s Cup star, Rod Davis, has been putting in the hours, while current National champion Luke O’Connell from Worser Bay in Wellington will be looking to go one better than his silver medal in 2014. He also took bronze in 2017.

Probert concluded, “The Devonport community, Wakatere BC members and the NZ OK sailors are ready to welcome our visitors and we are all confident this will be a memorable Ok Worlds and pre-worlds fortnight with many new memories and stories to ad the legacy of the class.”

In Part 2 of this preview we will look at some more of the favourites who will be contesting the world title.