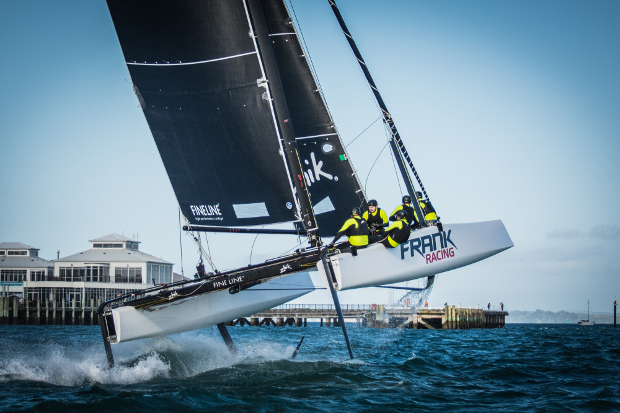 Despite the long commute, a second owner-driver team from ‘down under’ will be joining the GC32 Racing Tour when it gets underway at the end of May on Lake Garda, Italy.

New Zealander Simon Hull and his Frank Racing are no strangers to high performance multihulls, nor even the GC32 flying catamaran. For the last nine years they have been enthusiastically campaigning what was originally a top French ORMA 60 trimaran – Michel Desjoyeaux’s Route du Rhum and The Transat winner, Geant.

Since acquiring his three float flier, the Hull trophy cabinet expended rapidly, as he snapped up repeated line honours in events such as New Zealand’s Coastal Classic, set records in races to Fiji and Noumea and even competed in Australia’s ‘glamour’ regattas at Airlie Beach and Hamilton Island.

Hull says he closely followed the transformation of the America’s Cup catamarans into full foilers and, as someone enthusiastic about pioneering boat technology, was keen to experience airborne sailing for himself: “I enjoy speed and I saw foiling at the next way forward; a good discipline to learn.”

Designed by Martin Fischer, now Design Co-ordinator of the 36th America’s Cup Challenger of Record Luna Rossa, the GC32 fitted the bill perfectly. It is tailored for owner-drivers, with a conventional soft sail rig instead of a wing, no hydraulics, no Cyclors, the ability for the boat to be packed up and road trailed and yet capable of 30 plus knot speeds and flying in less than 10 knots of wind.

“These little boats are wonderful – you get back to seat of the pants sailing,” enthuses Hull. “I hadn’t done anything apart from keelboats and big multis for a long time – they’re not dry, but for this you have to put a wet suit on…”

For Hull and Frank Racing, the GC32 Racing Tour starts strongly with the first ever GC32 World Championship over 23-27th May. With a fleet size in the mid-teens, the biggest ever gathering of the one design foiling catamarans, Hull admits he is uneasy about the challenge: “The Worlds will be fairly daunting given the number of foilers and the reaching starts…”

Hull is also joining the GC32 Racing Tour as it will allow him to compete on some bucket-list sailing venues. The World Championship for example is being held in renowned Italian sailing mecca, Lake Garda. “It sounds like a wonderful venue with lots of wind and flat water – it is going to be fun,” he says.

Given that New Zealand won the America’s Cup last year in foiling catamarans, there is no shortage of talented crew to join Frank Racing. One is his son Harry, who trims, plus Guy Endean, Stu Dodson and Josh Salthouse, all by coincidence from New Zealand’s most famous sailing dynasties.

Dodson will not be with them at the Worlds as he is already competing aboard Oman Air. He is being replaced by Kiwi match racing skipper, Will Tiller.

Frank Racing should hit the ground running as, despite being new to the GC32 Racing Tour, they have an experienced crew and two years in the GC32 already.

Early on Hull took his GC32 across to Queensland, Australia where he survived racing at Airlie Beach in 30 knot winds against 4-5 knots of current, in which he admits they broke themselves and the boat. Undeterred, they followed this up soon after with ‘perfect’ foiling conditions at Hamilton Island Race Week where they scooped up the Australian Multihull National Championship title.

In joining the GC32 Racing Tour, Hull is hoping that it will improve his sailing and his learning about foiling catamaran racing. “Just reviewing all of the practices and how we do everything is really good.

“We are forever refining and improving, finding new and better ways of doing things. And there are some regattas in some pretty nice places, so it is good excuse to get up to Europe over our winter and sail some regattas in nice parts of the world. Plus I’ve never raced in Europe before…”

In 2018, the GC32 Racing Tour moves on from Riva del Garda to visit Lagos in the Algarve, Portugal for the first time, followed by Palma and the Mediterranean’s most famous multi-class regatta, Copa del Rey MAFPRE; Villasimius in southern Sardinia, not far from Luna Rossa’s headquarters in Cagliari and concludes in Toulon in the south of France.

Further teams will be announced in due course.

Get the very latest news from: www.gc32racingtour.com