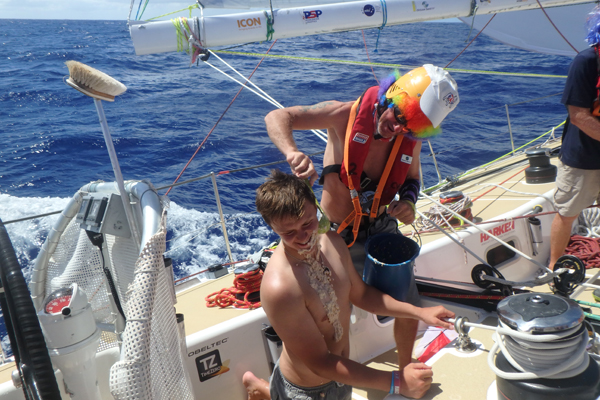 For the first time since escaping the Solomon Sea Doldrums, the Clipper Race fleet is experiencing much drier conditions and smoother sailing, as it continues to head north-west towards the next waypoint off the south coast of Taiwan.

The battle for third remains tight between Qingdao, Garmin and LMAX Exchange, but for now the Chinese sponsored entry holds a 6nM advantage over Garmin.

Skipper Bob Beggs says: “For the last few hours we have had sporadic views of Garmin on AIS (Automatic Identification System) and can now see them on the horizon on our starboard flank. It is the first sighting of another yacht for nearly a week but as we approach the next waypoint yachts always seem to come together. The wind is at last veering which will allow us to change to our medium weight spinnaker. The guys on deck now preparing for a peel so I will be called on deck shortly to help.

“Although Vietnam is getting closer, our arrival in Da Nang is still two weeks away so our focus remains with the racing. With the new course having been set, there are many opportunities to trade places amongst the fleet and there may be some interesting racing ahead.”

Qingdao has been embroiled in a battle with Garmin and LMAX Exchangefor days now, and the tight racing is driving the teams on as they wait for an opportunity to outwit their rivals, as Garmin Skipper Ash Skett says: “We have both LMAX Exchange and Qingdao in AIS range, one either side at about the same distance, making a juicy Garmin sandwich. With consistent and stable winds forecast for the immediate future, there will be little opportunity to make great gains for now but with the extended course hopefully there should be more tactical plays to come later.”

As the Trade Winds weaken slightly, a low front will come down from the north before sweeping east. The smooth sailing has finally allowed some of the Clipper Race fleet to have a special visitor on board nearly a week after crossing the Equator. King Neptune arrived on ClipperTelemed+, Garmin and GREAT Britain for the Pollywog crew members to pay their dues.

GREAT Britain Skipper Peter Thornton says: “Today we finally managed to find some suitable weather and time to conduct our crossing the line ceremony. There was a good hour at midday whereby the tadpoles became Shellbacks! Suitable court was called with costumes to fit the players and big splodges of a secret food based sludge were applied to the new crew after charges were read out, to which all pleaded guilty. The fire hose was used to great effect to wash down both crew and deck afterwards.”

The Ocean Sprint on the Da Nang New Spirit of Asia Race has been amended to take into account the new course.

Race Director Justin Taylor explained: “It has been changed to fairly reflect what a sprint should be. With the course change the original Ocean Sprint coordinates would have produced a diagonal course across the two lines of longitude. The new position of the Ocean Sprint produces a distance of approx. 150nM.”

As the teams continue to race towards Da Nang, Vietnam follow all the action and check out the new Ocean Sprint coordinates on the Race Viewer here.

To find out more about King Neptune and the Equator crossing ceremony,click here.