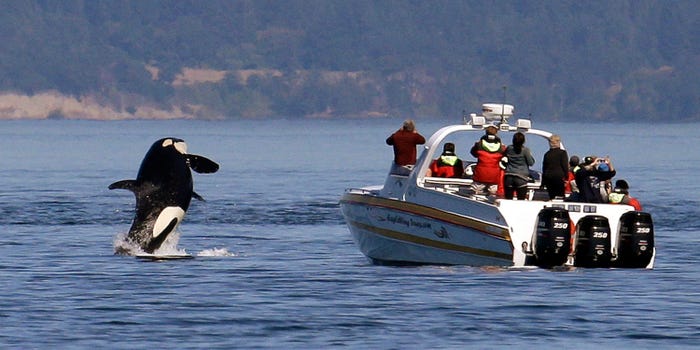 The Insider. By Sophia Ankel.

Killer whales are ramming and harassing sailboats traveling along the Spanish and Portuguese coasts in a series of attacks that have left scientists baffled.

Sailors traveling along the Strait of Gibraltar to Galicia have sent numerous distress calls in the last two months, with reports of boats losing part of their rudders, crew members sustaining bruises, and ships having to be towed away because of serious damage.

In one instance, a 46-foot delivery boat was surrounded by nine orcas off Cape Trafalgar in Spain. The whales, that can weight up to six tons, rammed the boat continuously for one hour, causing it to spin 180 degrees and the engine to shut down, according to crew member Victoria Morris.

Morris told the Observer that the attack, which happened on July 28, felt “totally orchestrated.”

“The noise was really scary. They were ramming the keel, there was this horrible echo, I thought they could capsize the boat,” Morris said. “And this deafening noise as they communicated, whistling to each other. It was so loud that we had to shout.”

The orca pod had left by the time help arrived, but the boat still had to be towed to a nearby town called Barbate. Crew members later found the rudder missing its bottom layers and teeth marks along the underside of the ship.

Read the full story at The Insider.