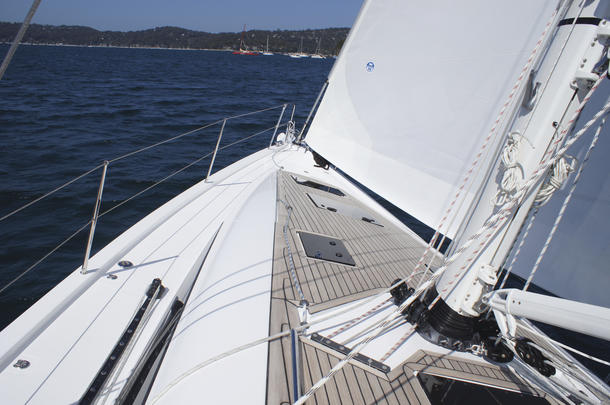 Over the years I have tried several methods to create a watertight mast boot.

As a temporary fix I once used duct tape. It was inexpensive and actually lasted about 10 months before it started to leak again.

I tried using a couple of rolls of mast boot tape, a wide self-bonding tape. It was quite a bit more expensive and lasted only a year and a half before it started leaking. I also tried a US product called Spartite, a two-part liquid that forms both a mast wedge and mast boot. It worked well, but is expensive and, if not applied properly, can permanently bond the mast to the boat.

While we were in New Zealand a few years ago, we pulled the mast for a refit. When we restepped the mast, we could not reuse the Spartite boot and I began looking for another solution.

At the suggestion of a local rigger, I decided to try a one-part waterproofing compound that is marketed for roof and gutter repairs. This is a thick, rubbery substance about the consistency of honey that can be brushed on. It will adhere to metal and painted surfaces and, once it dries, remains flexible and is UV-resistant. It seemed ideal for my application.

My first step in making the mast boot was to create a mould to support the waterproofing compound until it could set. I used my ever-present duct tape to make the mould but any wide, adhesive-backed tape would work.

I found the waterproofing compound at a local building supply store. The product itself is not hard to find, but it is difficult to find in a small quantity. For Nine of Cups, our 45-foot cutter, I needed less than a litre and the usual quantity available was in four or twenty litre size containers. I have since found the product in smaller quantities at caravan supply stores for use in repairing the tops of aluminium caravans.

Using disposable chip brushes, I applied three thick coats following the manufacturer’s recoat schedule. For the product I used, I was able to apply a new coat after eight hours of drying time, so I applied two coats the first day and the last coat on the second day. After it had dried beyond the tacky stage, I carefully removed the masking tape, using a razor blade as necessary. I then let the waterproofing compound cure for a couple of days.

Since the waterproofing is UV-resistant, the mast boot was now functionally complete but it did not look finished. I opted to make a cover from an acrylic awning fabric, using a small piece left over from our bimini project.

The shape of the cover is a bit odd. After a bit of trial and error, I came up with a simple formula that can be used to make the pattern. (see Figure 2).

You can calculate the two radii, r1 and r2, using the formulas below:

Before marking and cutting the fabric, I made a template from paper to make sure the pattern was correct. Once I was convinced the template was accurate, I used it to draw the pattern onto the fabric.

I added an extra 25mm to one end of the pattern as shown to allow for an overlap, then added 12mm to the entire outline to allow for a finished edge. Next I folded the 12mm of material along the outline and hand-stitched it. Marcie keeps a roll of basting tape on hand, which is narrow double-sided tape. This works well to hold the material in place while stitching it.

The last step in the fabrication process was to hand-stitch mating pieces of hook and loop tape onto the ends of the fabric where it overlaps.

I installed the cover by wrapping it tightly around the mast and collar and pressing the hook and loop tape strips together.

I wanted to add a whipping with 3mm white nylon line to the top and bottom to give it a finished look. In previous versions, I used a French spiral hitch and once I even finished it with a Turk’s head. It was a lot of work and I do not think anyone but me ever noticed. This time I used an easier method. I used a hot melt glue gun to attach one end of the small line to the cover about 12mm from the top, then made 12 wraps of line tightly and neatly around the mast working upward. I put a small dab of glue on each revolution and secured the end to the mast and the wrap just below it with another dab of glue. Using the same process, I also added a whipping at the bottom around the mast collar. The end result looks nice and I can remove it quite easily when necessary.

This mast boot has been in place for more than three years. It has been exposed to heavy seas and cold temperatures in the southern New Zealand and Tasmanian waters; as well as the more tropical temperatures of Vanuatu and Fiji. So far it has shown no sign of leaking.

I did find that the whipping at the bottom of the cover had a tendency to trap water between the cover and the mast boot, leading to a bit of mould growth. I have since removed the lower whipping.

I also found that the hook and loop tape began to lose its grip after a couple of years and, using a curved needle, I have now hand-stitched the acrylic fabric in place.

I have learned that the manufacturers of some of these products do not recommend its use on stainless steel because it will not adhere well. This should not be a problem in this application. If the mast collar is stainless, the membrane will form a tight, flexible boot over it, shedding water downward.