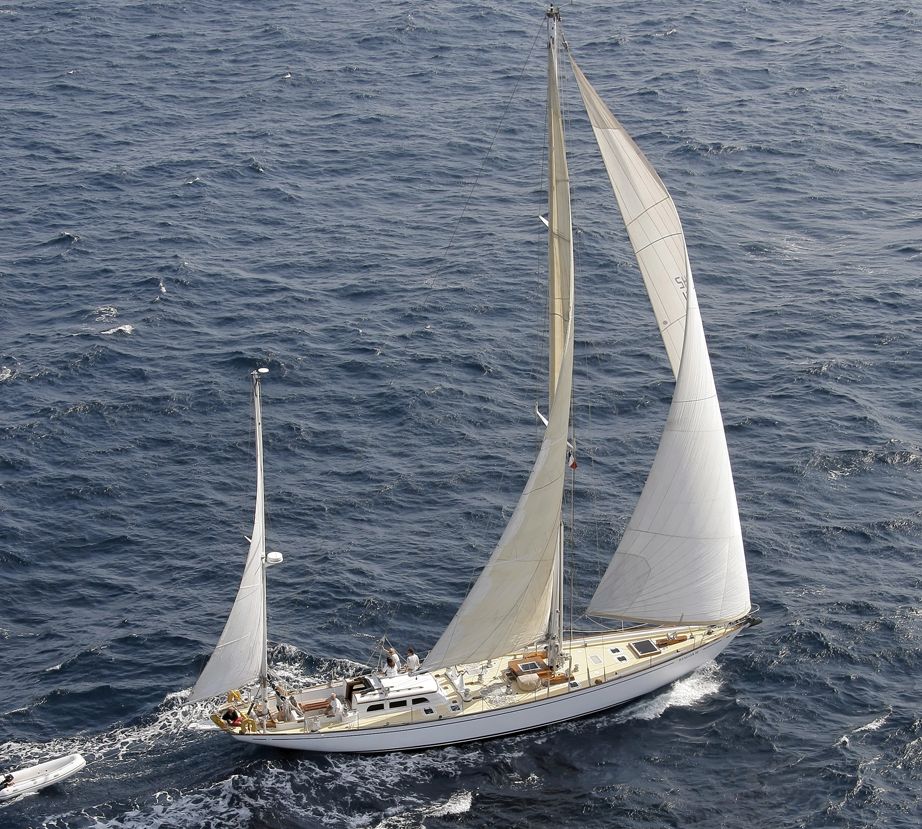 It’s been 46 years since the 73-footer Kialoa II took line honours in the 1971 Sydney Hobart Yacht Race and when the boat lines up for the Rolex Fastnet Race off Cowes in the UK this Sunday, its racing revival will be complete.

Brothers Patrick (AUS) and Keith Broughton (UK) purchased the aluminium warhorse, the second in Jim Kilroy’s series of maxi racing yachts called Kialoa, in 2016 with the view to compete in the classic ocean races, as Kialoa II did under Kilroy.

They will mark the boat’s racing comeback as one of a record 350 entries in the biennial Royal Ocean Racing Club’s Rolex Fastnet Race starting Sunday August 6, 2017. The last time Kialoa II completed the Fastnet Race was in 1969 when she finished runner-up over the line.

A combined Australian and UK Kialoa II crew of 18, including key members of what was once Australia’s most successful maxi yacht team on George Snow’s Brindabella – names like Bob Fraser, Lindsay May and Tony Hearder among the stalwarts – are preparing for the start of the world’s biggest offshore race in a few days’ time.

Their 605 nautical mile quest will begin from The Solent and take them around Land's End and across the Celtic Sea before rounding The Fastnet Rock and Bishop's Rock en route to the finish line off Plymouth.

Paddy Broughton says rebuilding Kialoa II has been complex, and that being on the start line on Sunday with the boat back in racing shape will be a moment to reflect on.

“We anticipated much of the work but thought we had two to three years to address the issues,” Broughton admitted. “It turned out that there were some fundamental problems that could not wait, including the fact all the sail handling systems from the old days had atrophied to the extent that they were almost completely absent. All the standing and running rigging has been replaced and we’ve organised a complete new suit of sails with the help of North Sails, who have done a magnificent job.”

Broughton said in the short time of their ownership Kialoa II has shown an amazing capacity to stir fond memories. “We have been approached by some of Mr Kilroy's crew with anecdotes and hints as to how they used to sail her. His daughter Trice has been helpful with information and contacts and former members of the US Coastguard have been in touch and provided help in a number of areas. ‘I remember seeing her in 19xx’ is a regular conversation starter.”

Since the Kilroy days Kialoa II has been used as a sail training vessel for the US Coast Guard and cruised extensively under various owners. Now the Broughtons’ journey to re-race the classics is set to begin.

First up the Rolex Fastnet Race then following a lengthy delivery sail the 45 tonne boat will arrive in Sydney in November to tackle another major bluewater event, the Rolex Sydney Hobart Yacht Race on December 26.

Unlike ’71, when Kialoa II’s waterline length and speed made the Sparkman & Stephens yawl the hot favourite and ultimate Sydney Hobart line honours victor, the boat will stand up on Boxing Day against a fleet of modern 100ft supermaxis and other carbon fibre lightweights plus boats of various vintages, like Matt Brook’s 86 year-old S&S 52 Dorade, for the all-important handicap silverware.

“What will suit us in the Rolex Fastnet and Sydney Hobart are conditions that allow us to use her waterline length and yet not enable the competition to plane. We shall see; there’s so much to re-learn,” Paddy added.

Kialoa II is one of a handful of Australian entries in the 47th Rolex Fastnet Race with many more Australian sailors spread across the fleet as crew.