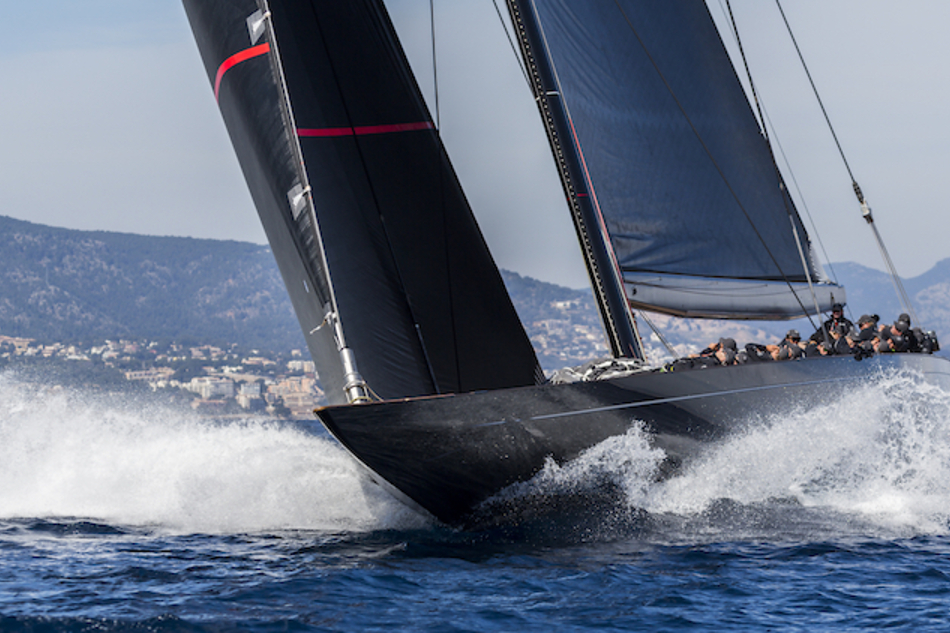 Hanuman, skippered and steered by local ace Ken Read with his brother Brad among the afterguard, stole the show on a spectacular opening day of the first ever J Class World Championship on the waters of Newport, Rhode Island where J Class yachts made their America's Cup debut way back in 1930 and where the Reads cut their teeth in competitive sailing.

Hanuman led from the first mark around a 20 nautical miles 'Navigators Course'. When challenged by the newest J Class yacht in the fleet Svea, which is guided by wily America's Cup Stars & Stripes veterans Peter Isler and Tom Whidden, Hanuman fought back downwind with smooth, well executed manoeuvres. When they took their well earned winning gun, Hanuman were extending into the mist, stepping clear of a spirited scrap over places second to sixth,

“That was one of the very coolest sailboat races I have ever been in my entire life,” Newport born and bred Ken Read enthused. “Honestly, it had everything. Home town. Gybing and tacking around all the little nooks and crannies, such a great crowd of boats out there watching. That is what we always hoped this regatta would show, how special this can be. And I am sure it did just that.”

“It was fun and special having my brother Brad on board. This whole team has been working for this for years and also to see the smile on Jim and Kristy's faces today. It was just great.”

The opening race of the inaugural J Class World Championship delivered it all, spectacle, majesty, close competition over a decent length course and just enough drama. The New York Yacht Club race team took full advantage of the forecast for a building, pre frontal breezes to sail a spectacular, tight coastal course up and back under the Newport-Jamestown bridge, checking off in turn historical local landmarks made famous over the dozen editions of the America's Cup raced here, entrancing the huge spectator fleet and treating the viewers who crowded the headlands and car parks that fringed the course to the close, spectacular competition they turned out for.

The fleet of six J Class yachts revelled in the perfect flat water and brisk 14-18kt SW'ly breezes. Places were traded back and forth throughout the fleet from first mark to the last. The sun split through the hazy cloud cover at key moments. Ranger shut out Velsheda at the windward end of the start line and with nowhere to go Velsheda clipped the signal boat. Harrying Hanuman around the first top mark Svea – in just their fifth ever J Class race – split their kite on a botched hoist, forcing them to make their first ever in line spinnaker peel. Double winners in Bermuda Lionheart came from behind on the beat to the finish, holding west of Gould Island, enjoying a huge starboard tack lift which got them back up to a useful third. There were even a pod of dolphins out to play around the bows of Ranger and Topaz early on the first 3.5 nautical miles beat.

The 20 nautical miles course was essentially a short upwind to a laid mark followed by a long run north against the ebb, funnelled spectacularly under the centre span of the bridge. Their choice of the Castle Hill, right side of the run looking downwind, prompted in part by their kite problems, yielded a useful dividend in tidal relief for Svea and they were all but leading as they passed Fort Adams, until Hanuman again eased away at the next gybe.

“The boat was going well.” Read confirmed, “We got out a bit of a jam off the start line. Being able to hang off Lionheart was key to start. Lionheart has been a very high pointing boat for a while. Being able to hang there until almost to layline was critical for us. And then once we got clear air we let the boat do its thing. It is a bit like a horse race, you let the horse do its thing. We picked the right jib, on the number two, a couple of the boats had bigger jibs and I think that the trimmers did a spectacular job, the communication was good. It was just fun.”

Asked if there was any local knowledge contributing to their win, Read said,
“Actually no, we nearly lost out to Svea on the right of the run. But actually we talked about it, Brad said 'if we were by ourselves that is what we'd do, but we were not. But it is the first race of the world championship and everybody gybed away and so 'don't be an idiot' we stayed with the pack. Svea made a six boat length gain but we picked the right kite (symmetrical), we gained a length or so on every gybe against the asymmetrics and on the last beat we just sailed smart.”

For the Svea team which only put their rig back in the boat just over a week ago after having their Bermuda J Class America's Cup halted by a forestay problem after just two races, second place today was a welcome reward. The newest, biggest J ever shows great speed but they are still early on the learning curve when it comes to smooth, effective manoeuvres compared to the teams polished by more than five years of J Class racing.

Svea's tactician and project manager Charlie Ogletree commented, “We are happy to get a second and start the series with a good result, a 'keeper' and we learned a lot today. That was our first spinnaker peel in anger after tearing our kite on the set. We took so long to get the peel done we were committed, we had discussed it but the boat handling pushed us in that direction.”

“There was less current down that side, staying close to Castle Rock, we had good local knowledge, some good navigating from Peter Isler. We changed our tactics towards the end to consolidate against Lionheart. Downwind we are quick and upwind we are still learning our modes.”

After being bounced around downwind Lionheart made the most of their recovery up the beat and were pressing Svea hard to the line losing out by just five seconds on corrected time. Tactician Bouwe Bekking, who has two of his Team Brunel Volvo crew on board Lionheart – and one from rivals MAPFRE – recalled, “It was a good day. We had a good start and squeezed off Hanuman and were in a good position when the breeze went too far to the left, the guys underneath us laid and we overstood and that is expensive in these boats. You crack the sheets and only go one or two tenths of a knot quicker.”