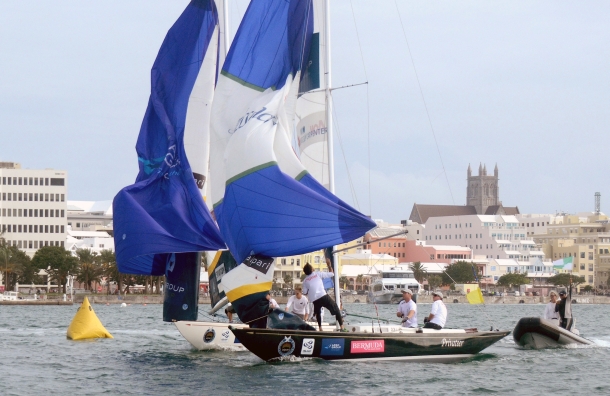 The Argo Group Gold Cup, an event of the World Match Racing Tour, enjoys pre-eminence among match racing regattas around the world. Year after year it attracts the top talent. The list of previous winners since 1985 includes 13 skippers who have featured in an America’s Cup campaign. And they’ve won the King Edward VII Gold Cup trophy 23 times during that span, led by Sir Russell Coutts’ record seven titles.

This year’s lineup of 16 teams continues that esteemed tradition. Besides Barker, the newly crowned Bermuda National Match Racing champion, and Bruni, the 2013 Gold Cup champion, the field also features regulars from the World Match Racing Tour including the event’s reigning champion, Johnie Berntsson of Sweden, and the World No. 1-ranked match racer, Ian Williams of Great Britain. Overall, the world’s top four match racers and seven of the top 10 are entered as well as three past champions, including No. 2 Taylor Canfield of the US Virgin Islands, the 2012 Gold Cup champion.

“We’re very excited with the lineup,” said Andy Cox, chairman of the Argo Group Gold Cup. “It reflects a nice mix of past champions and newcomers. And with two America’s Cup sailors in the field, the tour sailors should have extra motivation to show off their skills.”

Barker, skipper of SoftBank Team Japan, and Bruni, a member of the afterguard for Artemis Racing, are familiar competitors at the Gold Cup. Bruni won the title in 2013 and Barker placed fourth in 2003. But their turn in this year’s Gold Cup is marked by a return to the IOD, the 79-year-old design that’s the featured boat. Displacing 7,100 pounds, the IOD is about twice as heavy as the nimble AC45 catamarans that they’ve grown accustomed to sailing.

“Winning the Gold Cup was for sure a highlight of my career. It’s a special trophy with so much history attached to it,” said Bruni, a seven-time world champion across a variety of classes. “We will be as competitive as we can be, but I haven’t done a great deal of match racing in the past year. It’s going to be hard getting back in the IOD and going against the tour sailors. But when you have the frame of mind of nothing to lose, it can be a great frame of mind to have. We have nothing to prove, nothing to lose. It’s the best way to approach it.”

Barker began tuning up for the Gold Cup by winning the Bermuda National Match Racing Championship last Saturday, taking down Walker in the final. Barker said it was a “bit of a wake-up call” getting back in the IOD.

“The big thing that stands out is how much pre-planning you need to do,” said Barker. “It’s not a boat that you can throw around and make a split second decision. You have to think through the maneuvers and use your momentum. They don’t accelerate well and are hard to slow down when they’re up and running. The change in momentum is one of the challenges that makes match racing interesting, and these boats have it in spades.”

Barker had already gained entry to the Gold Cup via a wild card, so the spot allocated to the winner of the Bermuda National Championship went to Walker, an 11-time entrant in the Gold Cup.