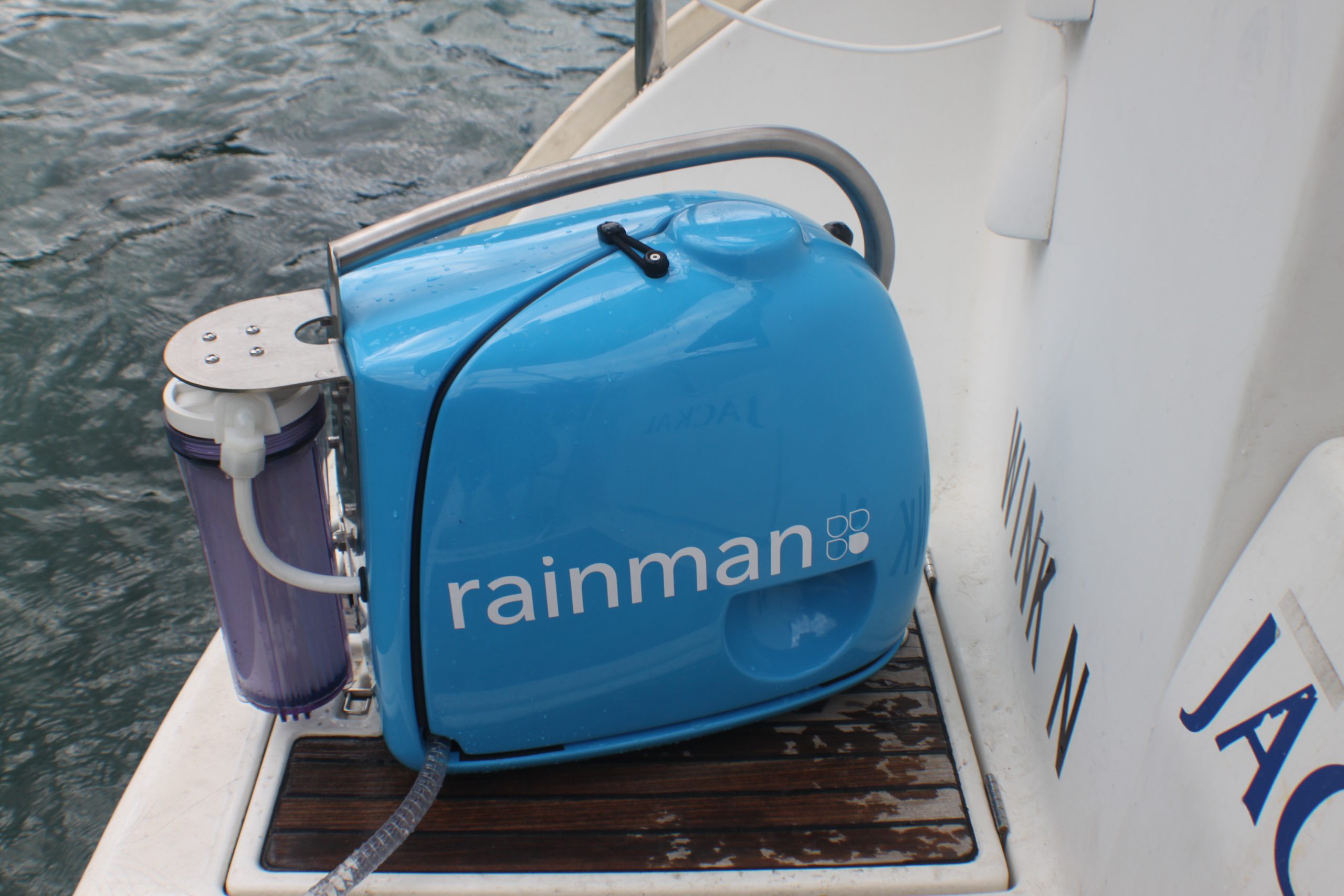 Sadly the reasons were too many to debate here, but one comment that did come through was that cruising has not quite moved into the 21st century for all aspects of the cruising life and that access to copious showers, now a birth right of every teenager, is missing. In fact the ability to have a shower on most cruising yachts has not moved far from the 19th century. The facilities might be 21st century but there is simply insufficient access to fresh water.

If we want our teenagers to grow into cruising maybe we need to pander at least partially to their desires? Maybe a compromise on the ability to have a hot shower might encourage more to join.

The desalinator is the obvious and sensible answer, except they are expensive to buy, they can look complex, can be a devil to retrofit, which often means more money and commonly on a small yacht are dependent on electrical power to drive them. Then it is a debate as to which is more scarce: water or electrical power.

One of the points often made of desalinators is the act of removing salt from seawater to make fresh, potable, water is expensive.

The equipment is expensive, installation is expensive and they are expensive to use however you power them: AC electric, DC electric or driven from the main diesel engine.

On the cost per gallon of water made they are difficult for most to justify, except that to access ‘free’ water usually means taking a marina berth for the night; marinas can be few and far between and we have not found any that we consider cheap. Moving jerry cans full of water about is not a great option either.

Desalinators are justified by many for its convenience factor. You do not need to visit a marina and pay for the berth just to top up and, providing you are prepared to pay the running costs, they offer unlimited water with the possibility of as many showers a day as you want to pay for. The alternative of adding extra water tanks and pipework is a possibility but most modern yachts have most spare space squeezed out of them and adding an extra 200 litre tank might be cheaper than a desalinator but it is a big ask, even then it offers only limited extra shower capacity as 200l is not that much.

An Australian start up company has come to the rescue and we thought they merited a serious look. The cost of the equipment is low(ish) and there are no installation costs. Running costs are much the same as any other water maker.

Rainman Technologies has developed a desalinator that offers a new choice.

The Rainman Desalinator is a stand alone, portable, petrol driven pressure supply unit that drives or feeds conventional standard and off the shelf Dow Filmtec reverse osmosis membranes. The membranes are housed in handy carry bags.

The pressure supply unit is based on a series of standard components; Jabsco lift pump; a seawater filter (takes out seaweed); a five micron filter; a Honda GXH50 four stroke, 50cc, 2hp motor and a, slightly modified, America General Pump WM series 316 stainless high pressure pump. The latter is the workhorse of the reverse osmosis industry and used by most of the desalinator suppliers.

Each of these items are well known internationally and spares and service well established.

The Honda unit has been around for over five years, sold tens of thousands and is used in a huge cross-section of applications from hedge trimmers to Honda’s own smaller gen set.

The Rainman package is very well constructed with robust stainless plates and brackets. In common with most modular desalinators it is neat and compact. The pressure supply unit is supplied in a 600mm x 310mm x 450mm case with carry handle, about the size of the small Honda gen set and weighs 27 kilograms.

The membranes are offered in three configurations: a single 40 inch unit (optimum capacity about 70l/hr) a double 40 inch unit (140l/hr) or 2 x 21 inch unit, in case space is restricted, (70l/hr). The power supply unit will service each of these units.

The membrane units are contained in a carry/storage bag and has the waste water feed, product feed and intake feed already connected to the membrane(s). Each hose is three metres long. The feed hose is connected to the pressure supply unit with a quick fit connector. The product feed is simply placed in the intake for the water tank and the waste water (or brine) fed over the side. Unless you are stretched to store the 40 inch units (and need the 2 x 21 inch units) then the cost effective choices are the single or double 40 inch units as the 21 inch unit is relatively expensive.

Most of the connectors are standard items, available from anyone who supplies stainless hose fittings.

There are a few specific connectors and these are available as optional extras in case you want to use the pressure supply unit to feed existing membranes or want to buy the membranes independently.

A complete kit is supplied with spare filters and pickling compound (the membranes need regular use or be pickled to avoid bacterial growth and blockage).

Warranty, covering manufacturing defects, is 12 months and the Honda power source is covered by a three year Honda warranty. Sales have already been made into Europe, so some customers do not see any of this as an issue.

We only had access to the 2 x 40 inch membranes and the pressure supply unit.

The kit comes with a laminated instruction card and assembly is simple.

We followed the instructions. Drop the raw water feed with one way valve and filter over the side (maximum lift is two metres but we did not test it to find the limit), connect the HP quick fit feed, already attached to the membranes, to the pressure unit, drop waste brine hose over the side and initially leave the product feed to go to waste.

The Honda starts with a single pull, we needed full choke but it was a Sydney winter (a chill 19° Celsius). There is a pressure valve connected to the membranes which needs adjustment to a mark in green.

Product flows from the feed hose. Initially the product is brackish and you can check for salinity with an optional salinity meter, we used taste. Once the product is salt free the product hose can be fed to the water tank. Salt free water takes only a few litres of waste, which we might retain to wash dishes or fish. It is filtered and slightly brackish.

We ran the pressure supply unit on the sugar scoop of the transom, if under way we would tie it more securely. Also, if under way it might be necessary to secure the water intake underwater to stop it sucking in air. We housed the membranes on the cockpit seats.

A three metre product feed hose might be a bit short and a longer feed of ten metres is one of the many options.

We could not test for maximum claimed output of 140l per hour as water temperatures impact performance as does,
obviously, salinity.

The sea temperature at the time of the test was 16ºC. However we were achieving around 120l/hr, which appears to be approximately correct. Our Spectra unit produces efficiently when seawater is 25º C.

Fuel consumption for the 2 x 40 inch membranes is about 1l /hr, or 140l of product water for one litre of gasoline (or approximately one fuel tank).

As with all of these petrol driven motors the pressure supply unit was noisy even with the engine cover on. We might be inclined to try to house the pressure unit in an insulated space such as the engine room or lazerette if sufficient space. You would need to ensure decent ventilation and find a way of maintaining sensible raw water feed.

But apart from noise the unit worked in exactly the same manner as our own plumbed-in Spectra unit.

The Rainman made more water, our Spectra is a 60l/hr maximum, but we crudely calculated that they were equally efficient based on a 60amp/hr alternator to produce power for our battery bank and hence Spectra unit. We reckon each unit uses roughly the same amount of fuel (diesel or petrol) per litre of product water, proving there are no free lunches!

One unit, Spectra or Rainman, might be more efficient but we do not think you would notice the difference.

The Rainman has one extra feature, another option is a high pressure washer gun a standard Kohler unit with stainless nozzle, which can be used for wash down. We briefly tested this, it certainly works and we did discuss, without a conclusion, whether it might be possible to obtain a modified nozzle allowing it to be used to wash the hull; even under water if you can get close enough to remove slime. Obviously pressure washers are available from any hardware store but few are built to work in salt water.

Based on customer reaction in Australia development work has started on a second model, to sell alongside the existing model, that would replace the Honda petrol unit with one driven by A/C and this would suit those who already have a gen set. Our ideal would be a unit that combines both desalination and power generation, after all both exist. Both use the same Honda power unit and needing two identical units looks unnecessary.

The Rainman does everything it claims

It is portable, can be stored in almost any locker space on most yachts, makes fresh water, does not deplete the battery bank and uses the same gasoline in your four stroke outboard. The main downside is that it’s noisy, but because it makes water quickly that might not be such a big issue.

The Rainman has other less obvious advantages, both being safety related: one being it does not need a through-hull fitting so no fear of failure and if anything goes wrong on the plumbing side of the system it is not going to flood your yacht, as long as you keep all the components on deck when it's operating,

On this basis, the unit is to be recommended.

Some people with a copious power supply, they already have a gen set, might find it a bit of a fiddle to assemble every time the Rainman needs to be used. There is no doubt throwing a switch on a fully automatic desalinator is easier!

Additionally, if your water requirements are large then a plumbed-in unit would be more sensible than repeated and noisy use of the Rainman. But for a small yacht, small crew, limited access to electrical power and a desire for independence the Rainman takes some beating!