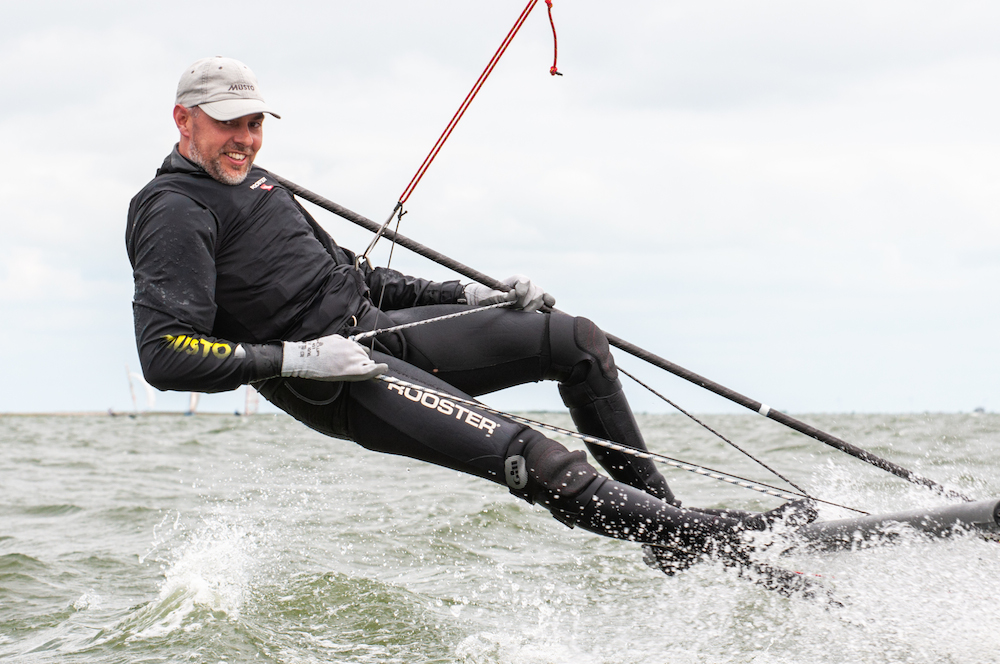 Bruce Keen with a wide-mile smile after winning the Worlds

Bruce Keen (GBR) kept his nerve and won the close battle for the ACO 10th Musto Skiff World Championship 2019 title in Medemblik, after it came down to the very last metres on the finish line of the final race.

In the morning the northerly breeze was light and variable, but in the afternoon it picked up to about 13 knots.

“It was a very exciting but stressful day,” said a relieved new triple world champion, Keen. “It was hard work out there. In the first race, I got ahead of the three other boats that I was in close competition with.

“Jon won the second one, so it was really close going into the last race. I just had to stay near him and we were together the whole race. He was ahead of me at the top mark, but I was able to pass him on the downwind and then I just beat him on the finish line.”

This is Keen’s third world title after winning in 2012 and 2015. “The sailing here was up and down with a lot of wind shifts. You never knew what to expect. It is definitely my most hard-fought world title. It feels great, but I am not sure whether it has totally sunk in yet, because it has been such a battle the whole time.

“Halfway through the week, I wasn’t doing very well at all, and then I kind of pulled it together in the last couple of days.”

After Ryan Seaton’s (IRL) victory in today’s first race, Newman won the second race to close the gap on Keen, and was two points behind his rival.

Newman: “It was very close right up till the last race. I had to get a couple of boats between me and Bruce to win the regatta.

“I had him on the first upwind, but he got through me on the downwind and sat on me the rest of the race. We were match racing. We started next to each other and we were hunting each other on the line. It was a really good game of cat and mouse. It was great fun.”

“I am happy to be second,” said Newman, who won in 2014 and 2018. “I had pretty limited preparation for this event. To be the best, you have to beat the best. Bruce and I have been trading first place for the last couple of years. I have come second to the best, which is fine.”

This morning, Rick Peacock and George Hand set sail as the overall leader and runner-up and ended up fighting for bronze.

Hand won that fight: “I had a tough first one, a reasonable second one and then the last race, thanks to Jon and Bruce playing cat and mouse with each other, I slipped through and got the top point.

“It’s been an eventful week with the breeze up and down. Obviously Jon and Bruce sailed incredibly well, so it is great to be amongst the best.”