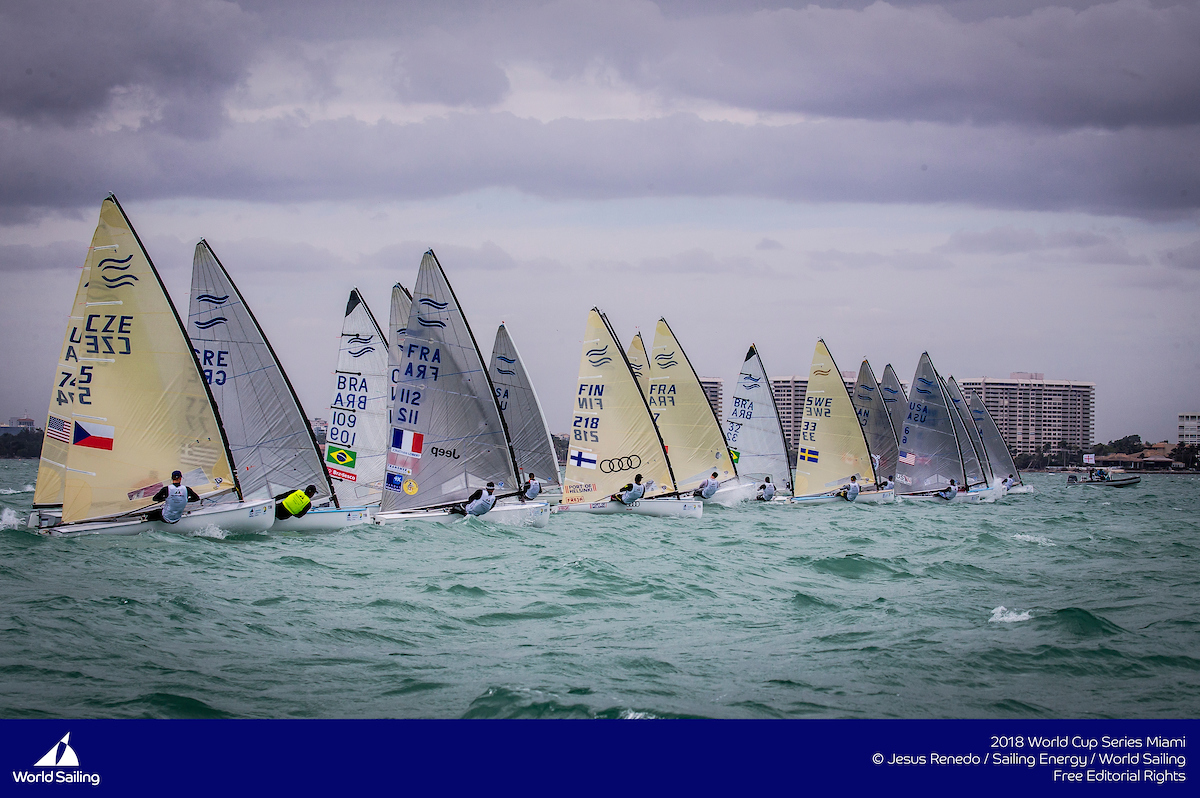 The Finn fleet at the World Cup Series in Miami is arguably one of the most competitive Finn fleets to attend Miami in more than a decade. It contains five former world champions, four former European champions, four Olympic medallists, and perhaps more importantly, seven former junior champions.

Last year's winner at the World Cup Series in Hyeres, Alican Kaynar, from Turkey, tops the leaderboard after three more races on Thursday in winds up to 20 knots. Five times world champion, and Rio 2016 Olympic Games gold medallist, Giles Scott, from Britain, is on equal points with the Turk, while Rio bronze medallist, Caleb Paine, from the USA, is in third.

The race wins went to Tapio Nirkko, from Finland, Scott and Kaynar. The racing so far in Miami has been very close. Today the breeze was up, pushing 20 knots for the first two races before dropping slightly. It was a testing day on the water with the sailors having to up their work rate to stay in the race and in the boat.

Ed Wright was the early leader in Race 4, but was soon passed by Nirkko and Scott downwind. Nirkko held off Scott on the second upwind tack for tack, and if anything extended slightly. Scott then stormed down the final off wind leg and closed right up on Nirkko, but was outside boat as they rounded the final mark. At the finish there was just one second in it. Ben Cornish crossed third after moving through the fleet on every leg.

Defending Miami champion, Jorge Zarif, from Brazil, led round the top in Race 5, with Scott back in fourth. By the leeward gate Scott was in front, but never really made much more of a gain, crossing the finish just seconds ahead of Zarif and the ever-fast Kaynar.

With the breeze starting to drop slightly, former Miami winner Paine, at his home regatta, took the early led in Race 6. Kaynar was second round the top mark and led through the gate. By the last downwind, Zarif and Kaynar were neck and neck, fighting for every metre down the final leg. Kaynar had the better angle into the final mark and slid round ahead of Zarif, with current world champion, Max Salminen, from Sweden, passing Paine on the final short hitch to take third.

After all that excitement, Kaynar moves to the top, tied on 13 points with Scott. Paine moves up three places to sit in third, after a consistently hitting fourth place in each and every race today.

The forecast for Friday is for very similar conditions with winds above 20 knots.

Racing for the Finns in Miami continues until Sunday.