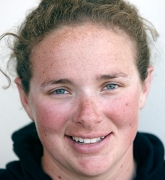 At 6.30am EST, Australian Katrina Ham was one of five Mini sailors still at sea. She had just over 100nm to sail.

Here's the media release from the organisers:

The pontoons that  previously seemed strangely empty, with the notable exception of each new arrival, have been full of life since Wednesday morning. They have been making inventories of all the little miseries from the first stage, repairing damaged equipment, finding appropriate  technical solutions to improve the performance of an auto-pilot, making the BLU reception more audible,  cleaning the boats and making inventories of possible tears in the sails. On and around the pontoons, the sails are drying, and  filling the grey docks with splashes of bright colour.

For some, there is a lot of work to do. Jean-Baptiste Daramy (Chocolats Paries) is going to have to stratify his rear panel again, re-install the  rudder gudgeons, and check the  grading and the balance of the two rudders. So, it’s a real  construction site that awaits the Basque sailor  before leaving on the second stage. The race against the clock is also  on because Jean-Baptiste has returned to work between the two stages, in the  composites workshop where he is employed.

Simon Koster (Eight Cube) is still, according to him, in a phase of discovery about what his prototype can do. For him, the stopover is an opportunity to discuss at length the points that still need to be tested, the things that went well, and the disappointments around the boat’s performance,  with the team from the Mer Forte office.

Others are trying to find solutions for squaring the circles. Sébastien Pébelier (Mademoiselle Iodée), diving into the water in Lanzarote port, found that the leading edge of his keel sail  had been damaged in a collision with a floating object in the midwater. The problem is that the sailor left  Douarnenez  with his sword drawn at the wind, but with empty pockets, and has not got a cent to offer to take the boat out of the water for the necessary repairs. Each sailor tries to activate their critical support networks  to come up with  a favourable outcome.

The whims  of  Aeolus

Following the  Chinese sailor, Xu Jingkun (China Dream),  it’s the turn of the Russian, Yuri Firsov (Magnum Sports)  to cross the finishing line in front of Arrecife port. But, the last miles have been very difficult. He must have failed to negotiate the becalmed patches  along the coast, and then couldn’t run with the thermal winds to try and grasp back some miles along the route.  His  followers didn’t even have this opportuity, as they were mired in the calm seas between  Morocco and the Canaries. There are only around forty hours left for  Fidel Turienzo (Satanas) and Maxime Eveillard (Héli Strategy) to reach Lanzarote. The first is a little more than 250 miles away, and the second has another 100 miles on top of that until they find deliverance. Fidel Turienzo needs to make an average speed  of 6 knots, while Maxime needs speeds of  around 9 knots.  Never say never.