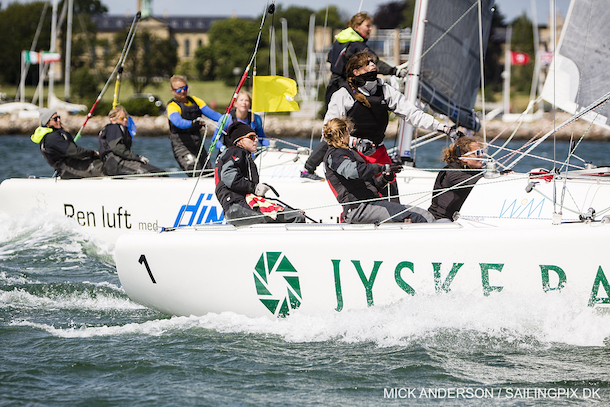 “We raced some difficult matches at the end, when we met the highest ranked sailors, but also the few matches we lost were very close. My team did a very good job throughout the round-robin, and we’re really looking forward to the continuation of the regatta” Le Berre comments.

Westerly winds around 25 knots put the competitors to the test when they went out on the water again Friday morning, after the long Thursday postponement. Once again the cheering crowds, following the thrilling racing from the Middelfart harbour pier, could see the world’s foremost match racing women perform their breath-taking manoeuvres. Exciting tacking duels, fast spinnaker sailing, really tight mark roundings and a few broaches and Chinese gybes entertained the spectators ashore.

Anne-Claire Le Berre did indeed win the round-robin stage, but lost her match against Friday’s unquestionable queen Stephanie Roble of the USA. Roble had a clean sweep, winning seven straight matches for second place in the round-robin on a 12 – 3 score:

“It was an awesome day of racing, so fun. We had a lot of races and everything fell into place. My team was just awesome” the US Yachtswoman of the Year shines.

“We just never found the right speed and didn’t feel very well in the boat. After many broaches and Chinese gybes we got a bit shaky” she admits, nevertheless looking forward to the weekend, when the meteorologists have promised lighter wind conditions.

“We can really use a change, and hopefully lighter weather will help” she hopes.

Compatriot Lotte Meldgaard defended the Danish colours better, finishing 12 – 3 on third place in the round-robin, despite a nasty accident in which her crew Josephine Nissen got hit by the main sheet in a gybe, hurt her back and had to go to hospital. A replacement crew took her place for the remaining races of the day, but the good news is that Nissen will be back in the boat for Saturday:

“All in all it was a good day, with some nice races when the wind dropped a little at the end. For the weekend we’d like to have really light winds” Meldgaard wishes.

The racing in Middelfart continues Saturday with the exciting quarterfinal knockouts, while Sunday will see the semis and the final to crown the World Champions.

Standings after the round-robin stage of the 2015 ISAF Women’s Match Racing World Championship in Middelfart, Denmark, the first event on the 2015 WIM Series (skipper, country, wins – losses). The first eight advance to the quarterfinal knockouts: