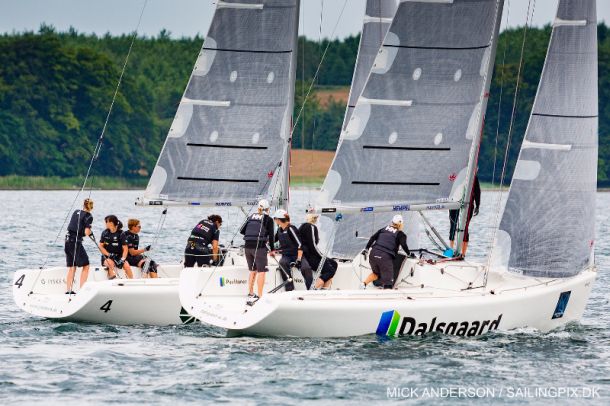 Swedish World # 1 Anna Östling and crew (left) in a practise fight against Stephanie Roble of the USA and her Epic Racing. Photo: Mick Anderson/Match Racing Denmark.

08/07/2015
During Tuesday’s practise session in Middelfart the Swedish crew of Team Anna had a few great fights against last year’s World Championship bronze medallist and WIM Series # 4, American Stephanie Roble of Epic Racing: “It’s a shifty and tricky venue and we were happy to be controlling the Swedes a lot of the time. I like the boats a lot, they spin quickly and it’s good to be five on board,” Roble comments.

By Sunday we’ll not only know which of the top ranked sailors has captured the World Championship title, but also who gained points on this first event out of four on the 2015 WIM Series. The first two years of the WIM Series saw 39 professional teams from 19 countries competing for gold and glory. Entering the third season, more than 20 teams have already committed: “We are really excited to get the WIM Series started for 2015 and cannot think of a better venue to kick off the new year. Match Racing Denmark is a fantastic organization that is professionally run and the venue is beautiful. With 9 of the top 10 in the world competing, the competition this week will be fierce,” says WIM Series Manager Liz Baylis.

World # 2 and defending WIM Series Champion, local hope Camilla Ulrikkeholm, finished on second place last year in Cork, and is certainly aiming to give the rest of the participating girls a fight for the gold medal this year. One of her opponents will be Klaartje Zuiderbaan of The Netherlands, who made her ISAF Women’s Match Racing World Championship debut already in the 1999 edition.

”We’re thrilled to be back in Middelfart and to be working with Match Racing Denmark again. They have an incredibly professional operation and I know it will be a good event following the successful ISAF Nations Cup Grand Final that was run here in 2013. It’s also great to have a full set of 16 teams – we are really pleased that 14 of the top 20 skippers are competing and I’m looking forward to some close and exciting racing over the next five days,” ISAF Competitions Manager Jon Napier concludes.