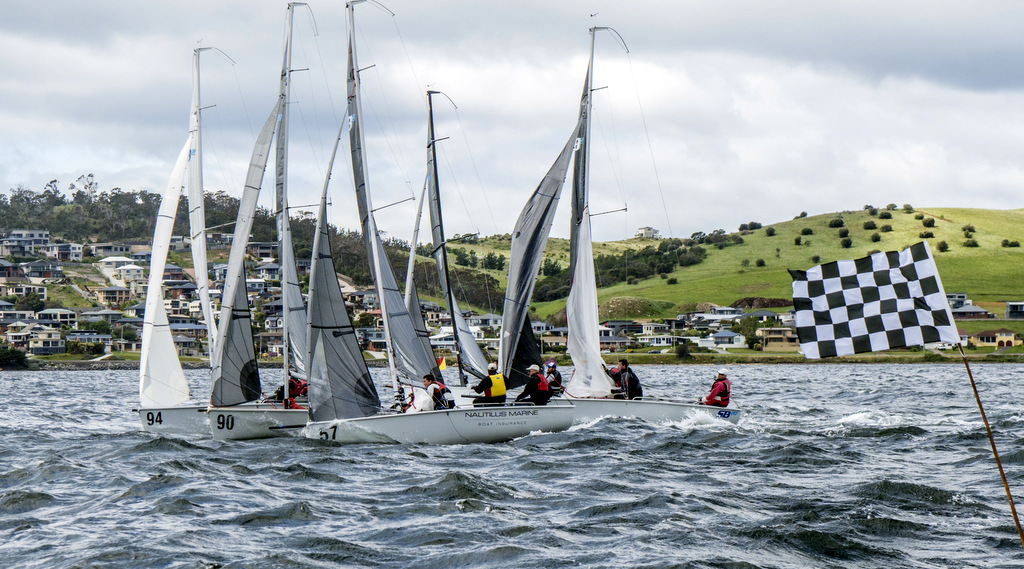 Close finish back in the fleet of the SB20s. Photo Jimmy Emms.

Nick Rogers and his crew of Karabos, Simon Burrows and Andrew Roberts came from behind on Sunday to win a curtailed SB20 class at the BMW Showdown on the River Derwent. Consistent sailing was Rogers key to success with a score of 8-1-2-2 to finish with 13 points from Paul Burnell sailing Honey Badger who had a 2-6-1-13 score, for a total of 22 points.

Rogers, a former world champion in Dragons and a 12-times winner of the Prince Philip Cup, the Dragon national championship, is the driving force behind the remarkable growth of the SB20 fleet in Hobart. There are now 43 SB20s on the register of the Royal Yacht Club of Tasmania and the Derwent Sailing Squadron which will jointly conduct the SB20 world championship in Hobart in January 2018.

With no discard from the four races completed, a final race13th place proved costly for Burnell who had headed the fleet after three races. Sailing with Burnell, a teenage world champion in International Cadets were his sons Toby and Oliver, and Meg Goodfellow, who turns 16 today. Meg had taken the place of her brother Charlie in the SB20, enabling him to sail his International Cadet, Meltemi in the BMW Showdown. And while Meg was on a winner in the SB20s Charlie was also winning races four and five of the Cadets.

Third in the SB20s was Pinch (Frazer Read) on 27 points from placings of 1-5-11-10, closely followed by Balios (Michael Pilkington) on 28 points and Brainwave (Scott Brain) on 31 points.

The 'no drop' proved costly to Michael Cooper (Export Roo) with a last place in the last race while Australia's 'father' of the SB20s, Queenslander Rod Jones suffered from his dismasting on Saturday. Bouncing back on Sunday with a new rig for It's Too Cold in Hobart, Jones had a fifth and a fourth race win on Sunday, finishing eighth overall.

He did, however, win the Masters Trophy while RYCT Rear Commodore Claire Cunningham led an all-women crew to win the Women’s Trophy.

Sunday’s racing was in more placid conditions than the boat-bashing winds and waves on the Derwent on Saturday which saw two SB20s dismasted, overall winner Karabos temporarily lose a man overboard in race one.

Andrew grabbed a sheet as he went over and Nick Rogers and the other crew, Simon Burrows, hauled him back on board. They still finished eighth in that race and won the next, clinching the regatta on Sunday with two second places.