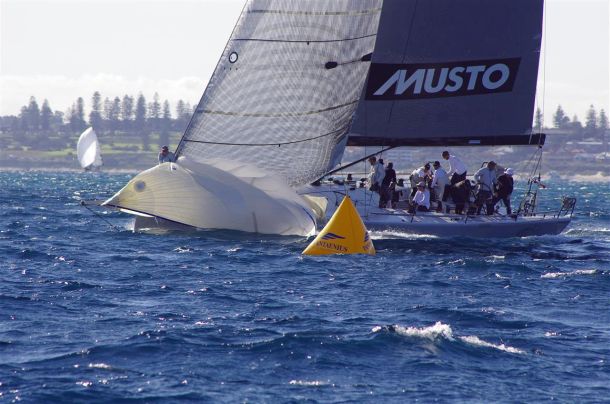 It’s often said in some genres of sailing “there are no seconds”. That wasn’t the case on Sunday for the Fourth and Fifth Heats of The Pantaenius Western Australian State IRC Championships where seconds were everything both on the water and in the rankings after application of the handicaps for the Three Divisions.

Racing was held beneath clear blue skies in a 10 to 15 Knot north easterly breeze with a windward mark at 070 degrees under the wind shadow of the iconic pines of Cottesloe. To the east there were cumulus clouds on the horizon und under the water that same lonely left over craypot from the summer lurking with intent.

There was some really tight and exciting racing in Division One with stop watches on the support vessels working overtime. After the application of the IRC Handicap in the Fourth Heat there was only one second between Indian the Carkeek 47 of Craig Carter and Calm the TP52 of Tony and Astrid Mitchell and only a further four seconds to The Next Factor.

Calm had an excellent race in the Fifth Heat with a timed and powered start at the Boat, followed by a smart tactical race and great crew work including a well executed ‘Mexican Drop’ by the team . The fast finishing Indian took second place by twenty two seconds over The Next Factor in third.

It’s those second places of Calm and Indian that have now placed them ahead of The Next Factor in the overall standings.

There were some notable crew changes within the fleet, Peter Ahern and the boys were back from Phuket Race Week joining The Next Factor, Luke Parkinson and Tomas Pradas (the Mexican) joined Calm and Jonothon Clough moved from Calm to Indian.

Once again seconds and second places were important in the keenly contested Second Division. There were two general recalls before racing finally got underway in the first race of the day with boats being forced over the line early by the tactics of Brent Fowler helmsman of By and Large. Ultimately it was front runner Giddy Up, and The X Factor who made the better of the start with This Way Up having to restart.

Interest surrounded the merits of asymmetric or traditional spinnakers but once again Giddy Up sailing an outstanding series won the first race of the day with The X Factor having the better of the battle of the Foundation 36 yachts. By and Large after a good start had the better of the second race and now lies in second place overall ahead of The X Factor by three points with Giddy Up a clear leader.

Mike Giles with some of his Endorphin crew sailed Selkie today in Alison Stock’s absence but once again Dynamic of Laurie Flynne won the day from La Premiere who had two seconds.

Luke Parkinson Abu Dhabi Volvo around the world race sailor and now Artemis Racing sailor has been another great addition to these championships which reach their conclusion with two further windward leeward races on Saturday 1 August Volodora Day at the Fremantle Sailing Club.