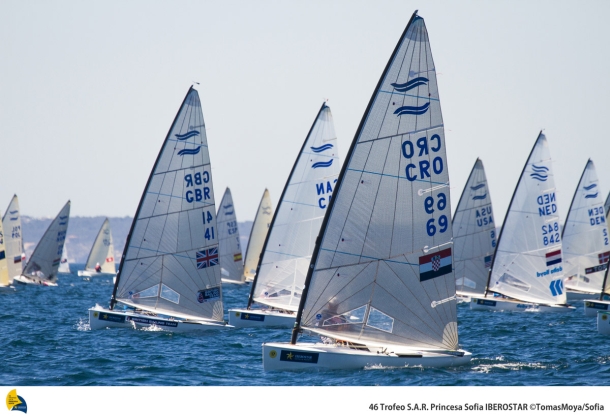 Josh Junior (NZL) takes the lead at the Trofeo S.A.R. Princesa Sofia Iberostar in Palma after being one of the few sailors to achieve any sort of consistency on the second day’s racing. Jonathan Lobert (FRA) drops to second on equal points, while Tapio Nirkko (FIN) remains in third with no race position better than seventh. Race wins went to Oliver Tweddell (AUS) and Junior.

It was a long day on the water with a lot of waiting around after an earlier postponement on shore to wait for the wind to fill in. Then after race 3, there was another wait afloat for race 4 to finally get away in a solid sea breeze.

Former world No 1 Oliver Tweddell (AUS) has always been good in the light stuff and produced some of that form in race 3 to take the win from Nenad Bugarin (CRO), last years Junior World Championship bronze medallist, and Monday’s unluckiest sailor Pieter-Jan Postma (NED).

Tweddell said, “It was a very long day on the water. We launched after 11am, and got in just after 6pm. We waited around for a light breeze to settle in and then we got one light race off before the sea breeze filled in to a good 15 knots.”

“I was quite fortunate to win the first race, as the leading pack got stuck in one of many wind holes on the race course. I managed to stay in my own bit of pressure the whole second upwind.” The main loser of that wind hole was early race leader Giles Scott (GBR) who dropped to around 25th. A lot of sailors also picked up some large scores. Tweddell added, “The last race was champagne sailing, but still quite shifty. I managed to keep out of trouble and put in another decent result.”

With the sea breeze in for race 4, Josh Junior (NZL) added to his fifth place in the first race to cross ahead of Caleb Paine (USA) and Alican Kaynar (TUR) and take the overall lead.

Junior said, “It was a great day sailing. We had two completely different races. The first was very light and dominated by the left hand side. It was good the race committee persevered as a steady 18 knots breeze came in. Really happy to have won that race too.”

The results board so far is looking like a random number generator, with virtually all sailors picking up at least one high score from the four races sailed. Junior is on equal points with Lobert, while Tapio Nirkko (FIN) is nine points further back, though he remains the only sailor here to have all four races in the top 15.

Scott didn’t have the best of days. After watching his race lead evaporate on the final beat in race 3, on the wrong side of a 75 degree shift, to eventually finish 20th, he is tonight evaluating whether he will be able to continue racing on Wednesday after a port-starboard incident in race 4 left him with his foredeck coming away from his hull.

“Not the best of days for me. I'm currently trying to work out if I can have the boat fixed by tomorrow. It's OK though, these things happen.”

Tweddell’s race win lifts him to eighth overall. He is in a close contest with Jake Lilley (AUS), currently in 14th, for the Australian Olympic spot in 2016. He explained how his campaign has evolved since last year.

“Since Santander I took a step back and did a complete review of my programme to assess every aspect of it. This was extremely helpful and highlighted some key areas where I was on track, and some other areas that needed to improve. My main focus has been improving my strength and fitness, as we see that as a big area to make some gains that will directly relate to my ability to sail faster for longer.  I have been spending a lot of time on the rowing machine and lifting a lot of heavy stuff to keep me on track for my strength and fitness goals I have set myself to be competitive.”

“Australia was the best sailing nation at the last Olympics and that comes about from setting high standards they expect their Olympic Athletes to achieve, and that is what I am aiming for.  That is the only thing you can focus on and work hard to prepare for, you can't control anything other than the work and intensity.”

Racing continues in Palma until Saturday 4 April, when the medal race for the top 10 will be sailed.