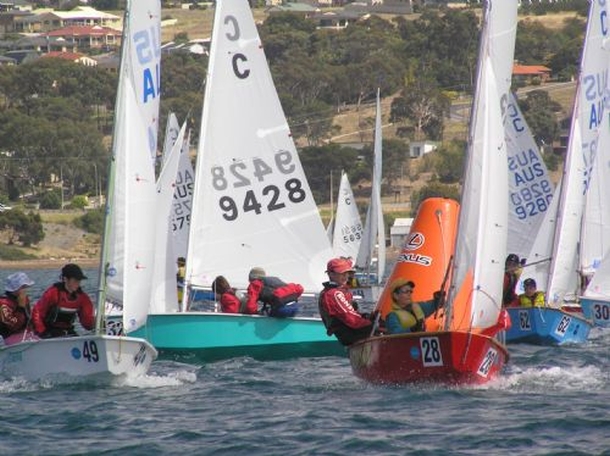 Hobart’s Sandy Bay Sailing Club team has won the prestigious Tillett Trophy at the International Cadet Australian championships which ended at Port Lincoln in South Australia yesterday, with the national title going to Victorians Julian Sasson and Mischa Suda in a last race duel with the Tasmanian crew of Sam Abel and Hugo Allison. .

Six crews from Sandy Bay finished in the first 12 placing in the 66 boat fleet to give the Tasmanian team the Tillett Trophy from the Victorians.

Sasson and Suda, from Sandringham Yacht Club,  notched up four wins in the 12 race regatta, with victory in race 12 yesterday putting them three points ahead of their Tasmanian rivals, who had headed the leader board going into the final race.

In a last race duel, sailed in a 12-15 knot south-easterly seabreeze,  the Victorians score their fourth win of the championship while the Tasmanian crew slipped back to finish eighth with the final score being a net 32 points for the Victorians,  36 to the Tasmanians.

Fifth place overall went to South Australians Emily Patching and Holly Shnaars from Adelaide Sailing Club who also won one of the 12 races and finished top all-girl crew ahead of Tasmanians Galbraith and O’DOnoghue.