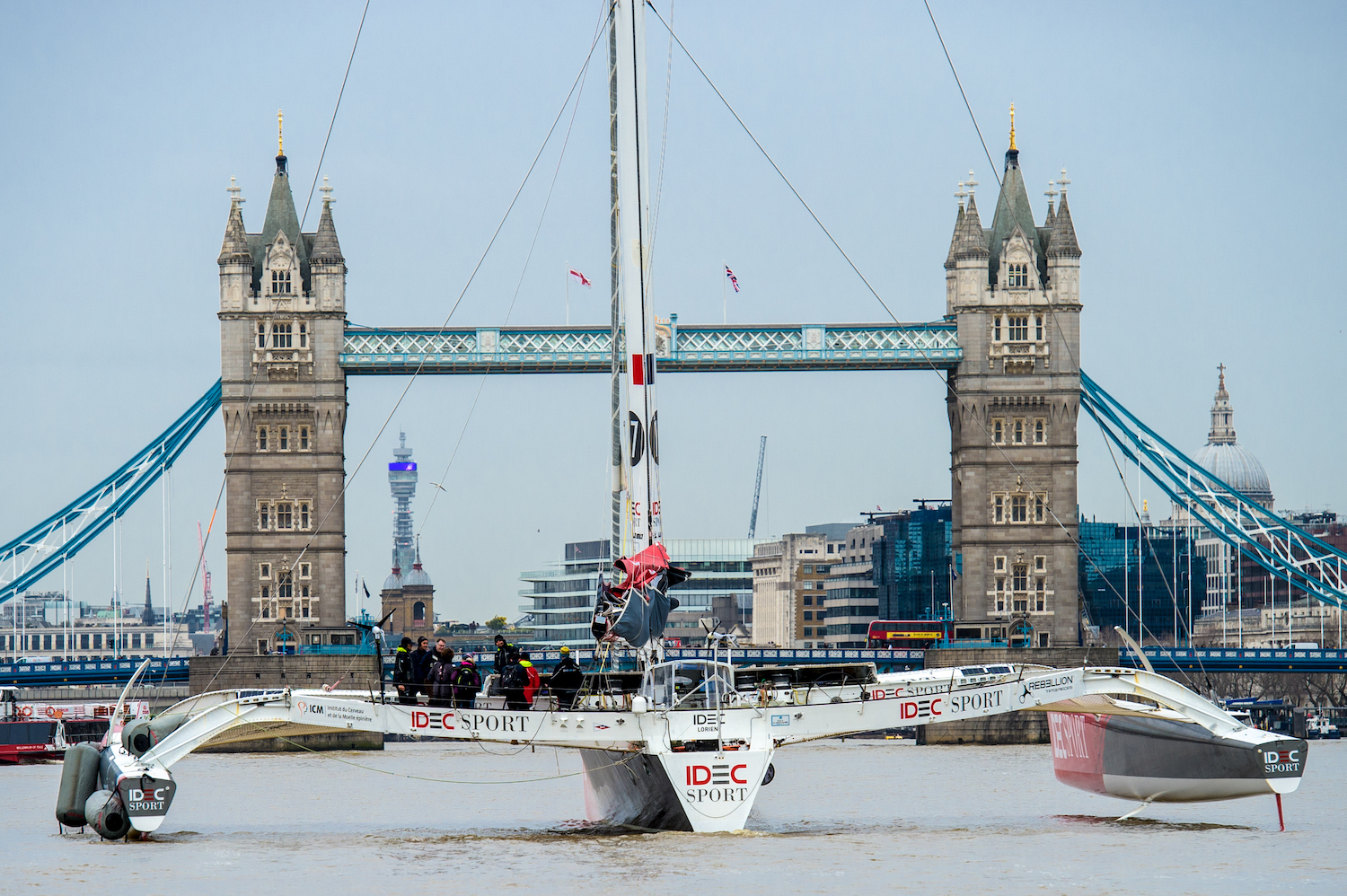 The boat crossed the finish under the QE II Bridge which spans the Thames at 07:37:33 hrs UTC.

They have beaten the record previously held by the Italian skipper, Giovanni Soldini (Maserati) by 4 days, 3 hours, 0 minutes and 26 seconds. They sailed 15,873 miles averaging 20.7 knots.

By lowering the record time for the Tea Route between Hong Kong and London to just over a month, Francis Joyon and his crew of four on the IDEC SPORT maxi trimaran have not only smashed Giovanni Soldini’s time by four days, but also divided by three the time it took the big clippers in the second half of the 19th Century to sail this route, as they fought a trade battle to be the first to bring the leaves for the revered brew back to London.

Sailing more than 15,000 miles averaging 20.7 knots, the maxi trimaran went through almost all the wind, sea, sun and temperature conditions imaginable with a series of surprises and unexpected hurdles, as they sailed sometimes smoothly and sometimes in highly uncomfortable conditions.

The China Sea, the Indian Ocean, The South and North Atlantic together represent a voyage halfway around the world. A voyage that the five sailors accomplished in record time, pushing back the boundaries in terms of performance, while at the same time showing tender love and affection to their venerable boat launched back in 2006. She has won the Route du Rhum three times and is the holder of the Jules Verne Trophy.

This has been a voyage back in time with memories of the big clippers of the past, a voyage of discovery with sea routes not often sailed by modern ocean racers, a human adventure and an opportunity to feel at one with the vast, open, natural spaces.

The Tea Route has brought together everything that Francis Joyon, the most exceptional sailor, loves to achieve and out on the water revealed some magnificent seascapes with champagne sailing conditions encouraging the crew to show respect as they contemplated the seas and skies.

Living up to their reputation, Francis Joyon and his men did not stay on stand by to await the perfect weather opportunity. On Saturday 18th January, they decided with the benediction of their weather advisor, Christian Dumard, to cast off and leave the huge urban conurbations of Hong Kong and Shenzhen behind them, as they were clearly eager to be back at sea enjoying the confined living conditions aboard their big trimaran.

The southern part of the China Sea and the voyage along the coast of Borneo and Java were particularly inhospitable a few weeks earlier on their way out for the men on IDEC SPORT, with frustrating calms, banks of mist and countless floating obstacles lying in wait around the hundreds of islands and rocks of Indonesia. But on this voyage home, the conditions were very different with a NE’ly breeze propelling IDEC SPORT on an efficient route towards the Sunda Strait, which is the gateway to the Indian Ocean between Sumatra and Java.

Joyon arrived there with a lead of almost 300 miles over the record after four days of magical, fast sailing. The crew were enchanted by the long paradise beaches of white sands in Malaysia. IDEC SPORT entered the Indian Ocean with a certain apprehension due to the threat far off the coast of Madagascar of the arrival of tropical cyclones.

The trade wind, which had been so powerful on the way out a month earlier, had left the Indian Ocean and so Francis, Christophe, Bertrand, Antoine and Corentin had to dive a long way south to find their salvation. At a latitude of 35 degrees South, Francis was able once again to enjoy the incomparable light of the Indian Ocean and Corentin was able for the first time to observe with some amazement his first albatrosses.

Roaring across the ocean for eight days at over an average speed of over 25 knots, IDEC SPORT increased her lead over the record to 824 miles, before slowing down to tackle the tricky rounding of the Cape of Good Hope. 14 days, 17 hours and 29 minutes after setting sail from Hong Kong, and having sailed 7590 miles averaging 21.7 knots, they had a lead over the record of 1 day, 8 hours and 56 minutes. This was pleasing for the crew after two weeks exposed to the moods of the Indian Ocean, which offered them a bumpy ride from start to finish:

“The Indian Ocean is full of secrets, and we weren’t able to discover them all,” admitted Francis. “It had moods, which did not correspond in the slightest to what we had seen on the weather charts. We were sailing against the weather systems.”

With areas of high pressure they had to get around and lows which they coped with often by sailing with the wind on the beam or even upwind, IDEC SPORT bounced from one system to another, shaken up by the violent fronts as they passed over. The short-handed crew were kept busy at all times setting the sails and above all responding quickly but cautiously to the brutal wind changes on seas causing the big trimaran to raise her bows and floats right up.

The South Atlantic unwilling to cooperate

Getting back into the Atlantic was a moment of relief. It is true that they had been fast in the Indian Ocean, but they experienced conditions that punished the boat as they headed into the westerly swell.

The men on IDEC SPORT were faced with two options. They could choose a route close to the coast of Namibia, as Giovanni Soldini did two years earlier, or try to find a way through the Doldrums close to the coast of Brazil. Francis hesitated. He was not happy with the thought of the conditions he would face in the Gulf of Guinea. On 3rd February with a comfortable lead of 740 miles, Captain Francis came to a decision. He would head towards the NW and Saint Helena with her strange volcanic silhouette, which looks like Napoleon’s hat.

The rounding of the High of the same name went without hitch and Francis, Christophe, Bertrand, Antoine and Corentin enjoyed the rare pleasure of speeding along close to the mysterious island. But the South Atlantic had not finished yet with the intrepid sailors.

The high stretched out around the Equator in latitude and in longitude. Thanks to the intrinsic speed of his IDEC SPORT maxi trimaran, Francis took up the challenge and decided to head even further west. However, that was when a small low developed right in front of their bows as they headed towards Brazil. IDEC SPORT had no other choice but to round it via the east, bringing to an end the initial strategy.

That was the start of a period of torture with moments of light airs, occasional squalls and as they approached the Equator, huge areas with absolutely no wind at all. Their comfortable lead melted away like snow in the sunshine and at dawn on 12th February, IDEC SPORT found herself 84 miles behind the pace set by her virtual rival.

Although the Doldrums were not that powerful, they had stretched right out at 25 degrees West and the sticky conditions seemed to want to cling on to the giant trimaran.

“In a South Atlantic like this, we would never have beaten the Jules Verne Trophy record!” exclaimed Francis, unusually disconcerted. But the NE’ly trade winds were there.

Francis and his men were pleased to be back in the North Atlantic and on their way home. IDEC SPORT was off again and immediately stepped up the pace. The rest fell into place in text book style.

Joyon and his sailors were aiming to pass by the Western Azores and managed to cross the high at its narrowest point to be able to hop onto the strong NW’ly air stream racing towards Europe. The gains came as quickly as the losses had wiped out their lead. In five days, they regained their 800-mile lead, which they had lost near Ascension Island.

After just over a month of sailing, IDEC SPORT sped past the Lizard and tackled the final stretch of her epic voyage which involved sailing up the English Channel and entering the Thames.

Tough to the end

Nothing ever comes easy to Francis Joyon in spite of appearances, and his greatest achievements always feature unforeseen moments, where things start to look impossible. In those final, crucial hours of sailing in the English Channel and the Thames Estuary, where there were so many traps lying in wait, IDEC SPORT had to sail as if blind.

Having running out of diesel and with no sunshine to charge up the solar panels, the men aboard the boat had to do without power. They could no longer use the radar, computer and had no access to the AIS system. The final night of this incredible record as they neared the Eastern coast of England, was full of dangers.

Francis slowed down preferring to wait for the first light of day to tackle the final, tricky miles. After many hours tacking into the wind in the Thames – the crew said there were around sixty changes of tack – IDEC SPORT finally made it to London to complete the Tea Route record and the 2019-2020 IDEC SPORT ASIAN TOUR.