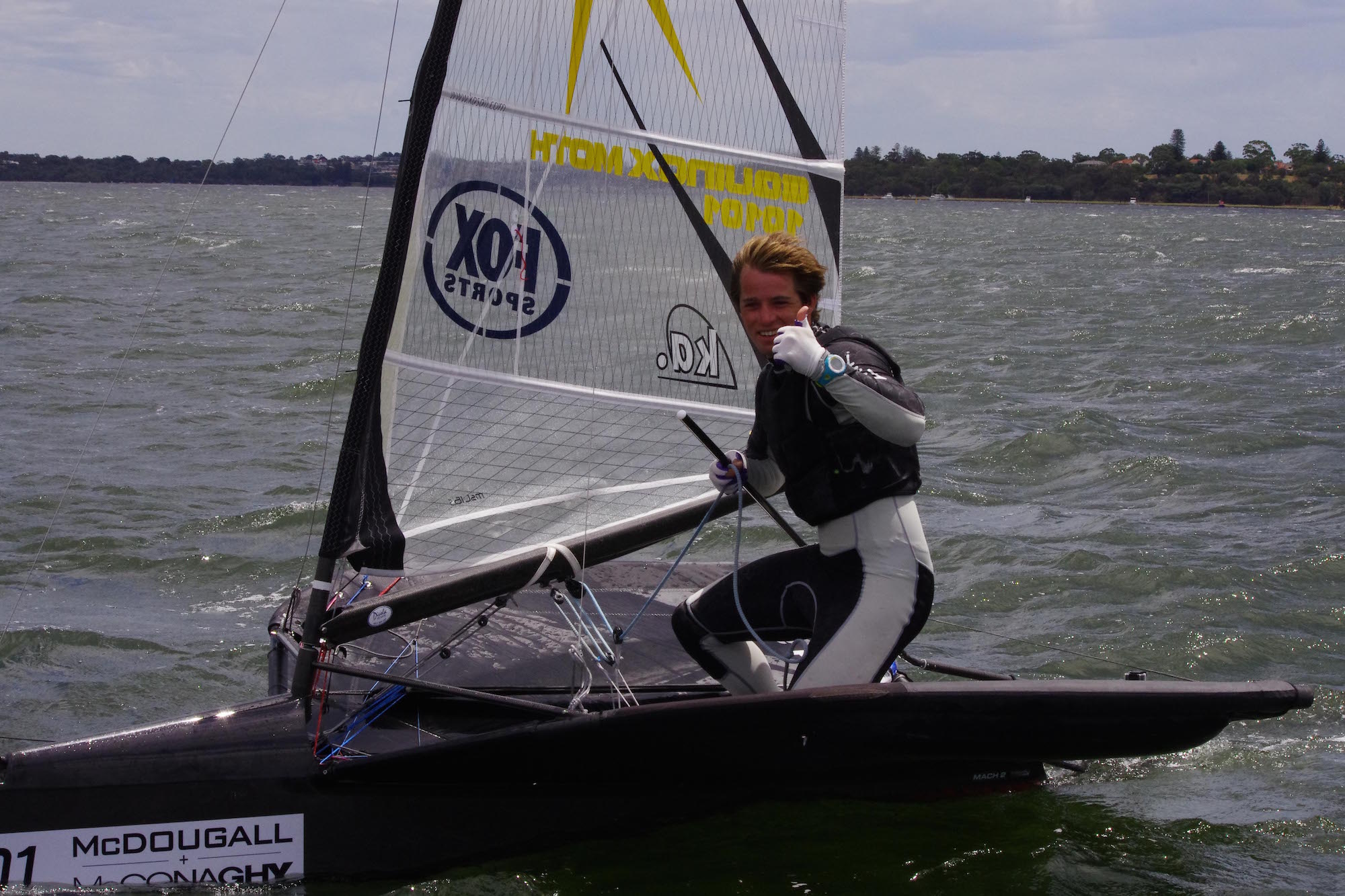 Thunder and lightning threatened over the Perth city skyline on the final day of the McDougall McConaghy Australian Moth Championships but an early start meant a number of competitors were slow to get afloat for the first of three final races.

The PRO Les Swinton fired his gun for a 3 lap race in a shifty 15 knot NE/E breeze. Britain's Ed Chapman was still frantically foiling to the start line in the final seconds, rounded the committee boat and picked the first shift perfectly to lead around the course and never look back. Some of the favourites were less fortunate. Runaway leader Josh Mcknight (NSW) hit the ground in one of the many shallow patches and limped round to finish 31st (his second discard). Many other competitors went for a pitstop ashore to change foils due to the the impending storm clouds. Rob Gough (TAS) used the situation to his advantage to finish in second with Reece Tailby from RPAYC in Sydney, enjoying the freshening conditions in third.

As race 2 started the breeze was already shifting further East and building and the lightning flashing around the shoreline. It was back to business as usual with Josh Mcknight doing somewhat of a horizon job on the fleet with the ever consistent Rob Gough in second. Reece Talby claimed third again.

As the final race approached the thunderstorm really broke and a reduced fleet blasted around the track in a gusty 25 knots with gusts of 30! It was wipeouts everywhere, even the top sailors had control issues especially at the bottom rounding. However it didn’t slow down the flying Sydneysider, who finished the regatta in style with a bullet to build his tally to 12 wins in 15 races. Rob Gough sealed second overall and Ed Chapman settled for third crashing around the course at every turn.

WA’s Steve Thomas also suffered some impressive face-plants but managed to hold on to 4th overall and Grand Master Andrew ‘Amac’ McDougall (VIC) 5th despite his wipeouts. The fleet got back ashore just before it got a bit ugly.

The host club, the South of Perth Yacht Club did a good job in a variety of testing conditions and hospitality ashore was well received. A large number of spectators afloat and ashore marvelled at the site of the flying moths and it is no doubt the class is growing in WA.