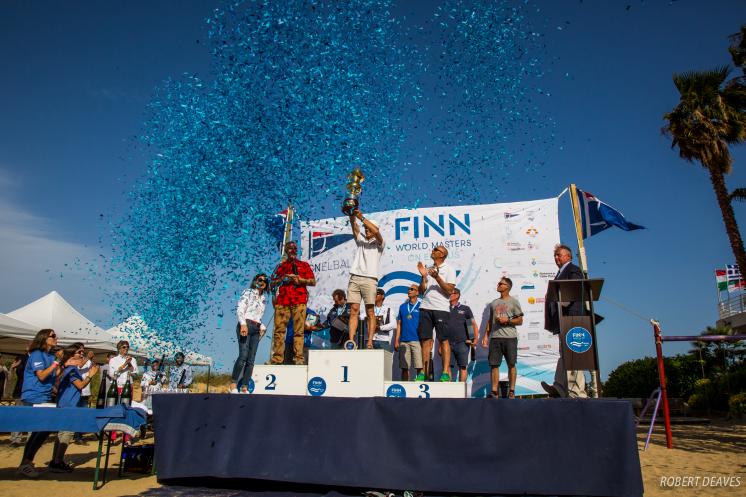 The 1988 Olympic Finn gold medallist, Spain’s Jose Luis Doreste, has won the 2018 Finn World Masters at El Balís, Spain after the holding on to his narrow points lead on the final day.

Antonio Poncell, from Chile, sailed the best day to take second, while Giacomo Giovanelli, from Italy did just enough for third.

The forecast predicted wind, plenty of it, but on arriving at the club, the sea was flat and lifeless. However something was developing and it wasn’t long before a building easterly was in place and beginning to show some life. The first race was tricky with several large shifts causing abandonments and restarts, but the wind finally stabilised at 9-12 knots and the fleet enjoyed two great races.

Many sailors jumped the gun and picked up one or two starting penalties, which changed the overall standings somewhat. In the Yellow group, the defending champion Vladimir Krutskikh, from Russia, took a win, but couldn’t match that in the other race to end up fourth overall. Thomas Schmid, from Germany won his second race to end up ninth.

Antonio Poncell dominated the Blue fleet and nearly won both races, but former champion Andrew Budzien from Germany, ended his week with a win, a few boat lengths ahead of the Chilean.

Over on the other course, in Red fleet, Paul McKenzie, from Australia, and Christoph Burger from Switzerland took the wins.

In the Green fleet, Brit, Simon Percival took the win after the winner was black flagged, and Aleksander Kulyukin, from Russia, took the second race. Percival was the second lowest scorer of the day after Poncell.

Patience has been a key part of the championship with three days of no racing. The lack of wind flummoxed the organisers, who had gone to great efforts to put on one of the best organised Masters championships ever. No stone was left turned in their pursuit of creating the perfect event. The result was a credit to the club, the principle organisers and more than 100 volunteers and officials who made it all happen.

At the closing ceremony, Miguel Angel Mateo, who had the vision for the initial approach to the Finn Masters, was thanked and presented with a memento, not only for bringing the event to his home club, but also for developing and building the Catalan Finn fleet to the position of strength it now occupies.

Throughout the week, while the lack of wind was frustrating, the Finn Masters are old and wise enough to know that you cannot beat nature, and spent the days in long conversations, looking at sail trim and making friends.

Several sailors commented that they really enjoyed the opportunity to spend so much time talking with their fellow Finn sailors and just enjoying being here. Despite the reduced racing schedule, everyone has had an enjoyable stay at the Club Náutico El Balís.

After a 30 year gap it would seem Doreste has lost none of his Finn skills. He also picked up the Grand Grand Masters title.

“I am happy to return to sail the Finn. I have not sailed Finns for 30 years and I am really impressed with the power and strength of the class with 350 boats sailing here with such good materials. I am really convinced that the Finn class will survive, and I would like to continue sailing Finns. Next year I will try to be there. I like Denmark.”

“My goal this year was to finish top ten and in the medals of the Grand Grand Masters, so I am very happy with the final results.”

On the organisation: “Very, very good. I have been in many races where we didn’t have any wind, so that is something you can’t fight. From the club side I think they have done everything possible to make sure that everyone is comfortable. They have worked very hard. And on the water it has also been very tough for them, and very good racing.”

Runner up, Poncell, and Grand Masters winner, was surprised at his success: “I never thought about this success. Chile is a little country down in South America and our fleet is very new, but we are pushing hard for the Finn class and we are very happy being here and having such a success. I am so happy, Thanks very much to the Finn class for keeping us alive and we keep on pushing and making sport, and that’s what we are looking for.”

Giovanelli takes third overall, and was the first Master. He was also impressed with the level of organisation. “Perfect organisation, though unfortunately there was not much wind, but altogether it has been an amazing event. I have had fun, stayed together with friends and made new friends, and I hope to participate also in Denmark next year.

“It’s always an emotion to be standing there on the podium, even more to be standing alongside sailors like Doreste. One day or another I also hope to be able to win the Finn World Masters.”

The largest cheer as always went to the Legends and Super Legends with a record breaking entry. After a recount, Friedrich Müller, from Germany, won the Legends category for the third time, while Gus Miller, from the USA, won the Super Legends. Gathering 45 Legends on stage was not only an emotional moment for everyone, but proof that Finn sailing can be a sport for life.

We hope to see as many as possible of them next year when the 2019 Finn World Masters is being hosted by the Royal Danish Yacht Club at Skovshoved, near Copenhagen.