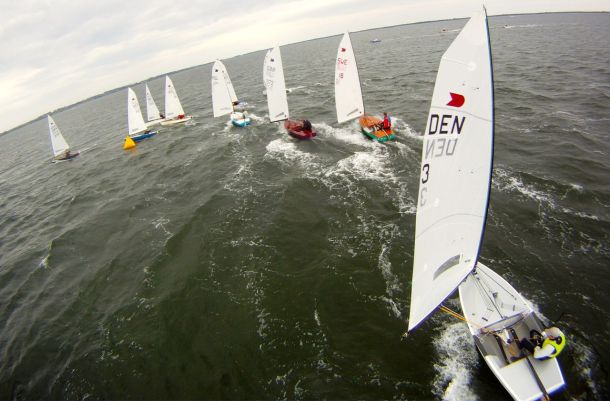 Racing at the OK Dinghy World Championship begins on Tuesday, but on Monday the practice race was held in a moderate to strong southerly. Ninety-three sailors are now entered for the week.

The race was started after one general recall in 14-16 knots and increased to 18-20 knots with great downwind sailing keeping everyone busy. Many sailors went out intending to do just one lap and come ashore, but most were having so much fun they carried on despite it just being a practice race.

The early leader was former world champion Thomas Hansson-Mild (SWE) who opened up a nice lead before peeling off and heading in. The race ended in a very tight finish with another former world champion Jørgen Lindhardtsen (DEN) crossing just ahead of Henrik Kofoed (DEN) and Pawel Pawlaczyk (POL). Some 54 boats finished the race.

Lindhardtsen, always a strong challenger in strong winds throughout his career, has been looking for a second world title ever since he won the first one way back in 1978. Has he now jinxed his challenge this year by winning the practice race – always a supposedly unlucky omen?

The forecast is still showing pretty strong winds for most of the week. Racing for the 2015 OK Dinghy World title is scheduled to start at 11.30 on Tuesday morning.