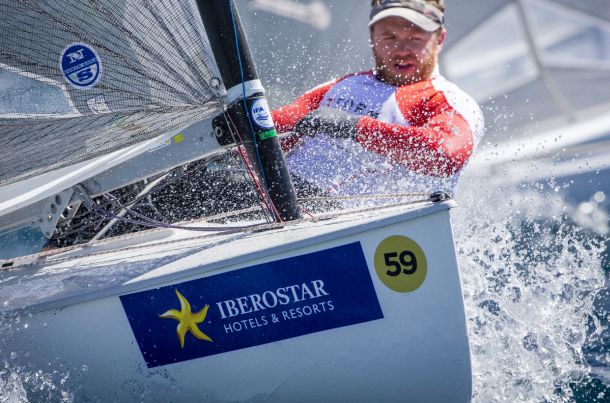 Jonas Høgh-Christensen, the Danish silver medalist in the Finn class from the London 2012 Olympics is back for his fourth Olympic campaign. The Trofeo SAR Princesa Sofia Iberostar regatta in Palma marks his return to Olympic campaigning.

He made headlines in 2012 as the ‘Great Dane’ trying to overcome Ben Ainslie on the waters off Weymouth & Portland. The battle and the story that followed captivated the sporting world, but afterwards Høgh-Christensen announced that he didn’t think he would be back for another campaign. He said at the time, “I don't have any sights for Rio. It looks like my time is up.”

However, he made a brief appearance at the 2014 ISAF Sailing World Championships in Santander, where, after two years out of the boat he placed a respectable 11th and qualified Denmark for a place the Rio 2016 Olympic Games. Many people thought that was where it would end. Did he think he would be back again after that? “Actually not really, but I did use Santander to see if I missed it enough to come back. I have learned never to say never about sailing.”

And now? “The decision was made in January on the premise that we could put together a proper campaign with substantial financing and the right people around me. That came through on Thursday of last week.” How important was the financial backing? “It was very important. I get about 75 per cent of the total budget covered by the federation and its sponsors and the rest I need to find myself with personal sponsors.”

Is there anything he is going to be doing differently this time? “Not sure yet. Kristian [his coach, Kristian Kjaergaard] and I are aware that we did a great campaign last time around, but it doesn't mean we will do it the same way again. We need to keep pushing and stay open-minded for new opportunities. It is a different game for every cycle.”

Høgh-Christensen will be 35 years old by Games time in 2016 so the physical side is clearly front of his mind. He has done a lot of physical training since January. “I have been in the gym eight times a week, every week, since January, though I have not sailed since Santander.”

Physically how fit is he compared to the same stage in 2011? “I am much fitter, but then the whole fleet has gotten much fitter, so I needed to start on a higher level. Also with being four years older, it takes a bit more time to loose fat and gain muscle.”

“It will be a constant fight between pushing myself without breaking. The last 12-15 years in the boat, with some massive breaks, puts its toll on the body. But my wife is happy. I almost look like the guy who asked her to marry her.”

What about gear development? “I am not sure what we will do about that yet. It seems like the mast and sail development hasn't moved much, but new boats are hitting the market and we will follow that closely.”

His schedule for this year will consist of lots of training but only a few regattas. “I will only sail Palma, the Test Event in Rio and the Worlds in Takapuna. Maybe also something in the fall if something presents itself. The priority this year is hours in the boat and to keep getting fitter.”

“We are moving to New York as Julie got a great job. So that will be my base. She will focus on work and I will sail. We probably won't spend as much time together as we like, but we have been here before.”

Other than Høgh-Christensen, the Danish Finn team consists of a young group of sailors on a steep learning curve. Most have their eyes on 2020 rather than 2016. “I will try and pass on all my knowledge over the next year and hopefully the young guys can build on that and become the stars of 2020.”

Last question was why do it again? “It’s my last chance, trying to hit the grave with as little regrets in life as possible and because I just love sailing.”