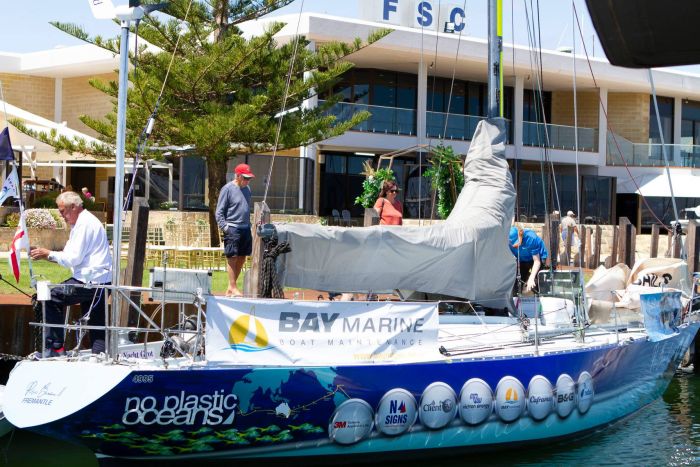 Jon Sanders, local Perth sailing legend, is preparing to depart Fremantle Sailing Club on his 11th Solo Circumnavigation at age 80 later in October. His voyage will take him between 9-12 months, sailing over 27000 nautical miles and stopping at 11 ports.

Jon will be sailing his 11th circumnavigation to measure the amount of microplastics in the Southern Hemisphere oceans. Professor Kliti Grice and her team from Curtin University will be overseeing the microplastics research and will publish a report after the voyage detailing their findings.

The voyage is an initiative of No Plastic Oceans, managed by Dr. Stephen Davis in conjunction with Curtin University, Fremantle Sailing Club and Royal Perth Yacht Club.

Last Sunday Fremantle Sailing Club’s Cruising Section & Marine Environment Committee hosted a farewell BBQ for Jon on the Sunset Deck. Over 60 people came down to the club to wish Jon a safe voyage. Thank you to Fremantle Sailing Club members and staff for your support of Jon’s 11th Circumnavigation.

Perie Banou II will be moored on the Jon Sanders jetty at FSC until his departure.

Jon’s departure date is not yet confirmed. When a date has been set, members will be invited to join Jon on a sail through Fremantle Port before following him out as he sets off on his voyage.

Follow the voyage in real-time at www.jonsanders.com or make a donation at www.gofundme.com/jonsanders