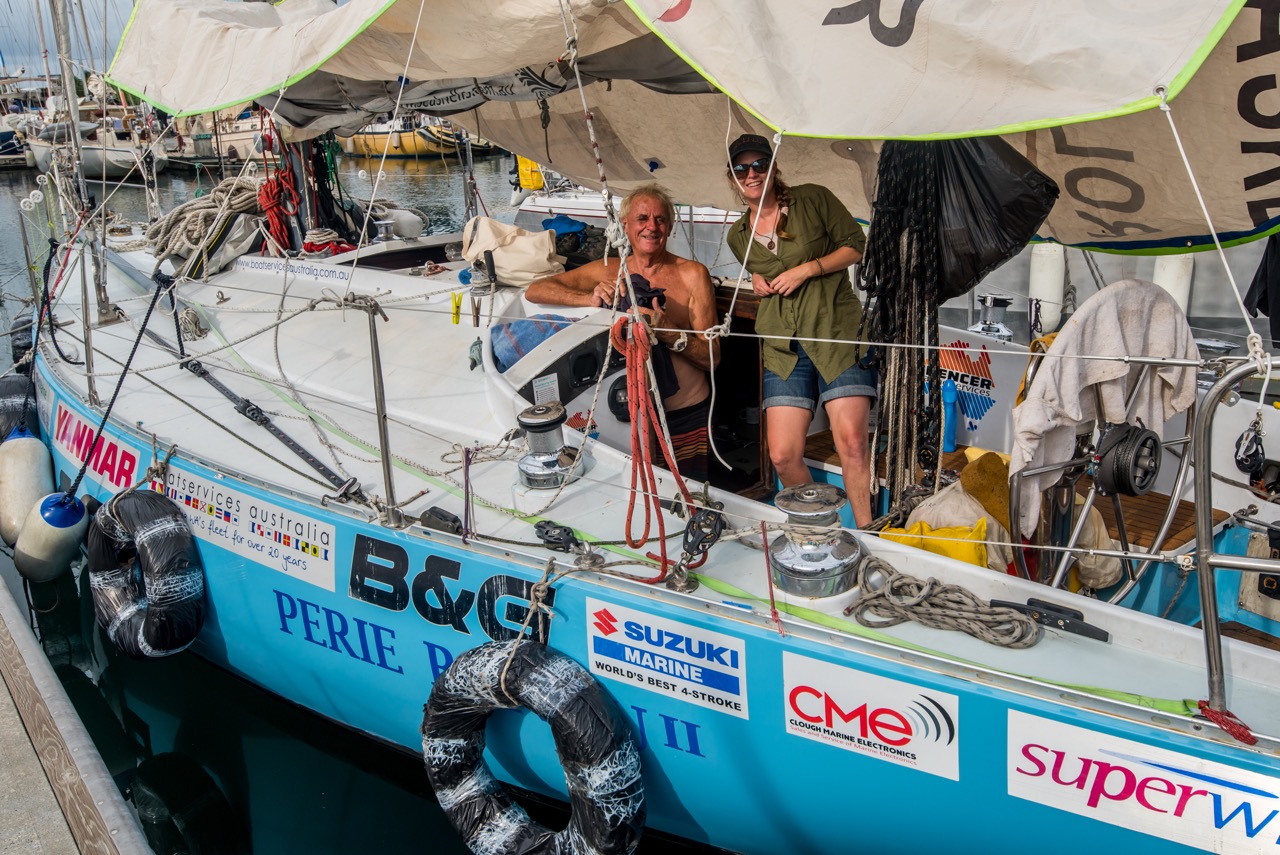 Jon Sanders is halfway through his 10th circumnavigation of the World aboard Perie Banou II. This is his description of the passage through the Panama Canal.

As you are probably aware Perie Banou 2 was to depart Shelter Bay Marina, Colon – Atlantic end of the canal, Monday 22nd May 2017 this year. Well I didn't. Went Tuesday.

Why? Don't know. You get that. Same with two other yachts. The three yachts did the transit Tuesday.

The other yachts was a French owned Lagoon 50 (ft) catamaran and a New Zealand owned Royal New Zealand Yacht Squadron 44.5 Beneteau. RNZYS is in North Island.

Paul Stratfold and his partner of 8 years, Shiralee Fitzgerald, flew in from St Maarten Caribbean to manage and do the transit.

Paul did not declare them. Bad boy. (I think he's good bloke, – but then again I ain't Panamanian.)

He got arrested. True.

So a Panama lady customs officer ends up being in the car driven by driver Ricky organised by our transit agent Tina McBride.

Lady Customs Officer needed to travel in the car with Paul and Shiralee and the two precious now expensive boring oil and fuel filters. From Panama City (pacific) to Colon (Atlantic) – the other side of Panama.

Thus to ensure the oil and fuel filters were safely put on Perie Banou, just like where Paul reckoned they were going.

Paul paid the cost of the official's movements and the return by taxi. Cash of course.

During the next several days Paul would get the odd IPhone call from the lady. Despite Shiralee, she seemed to have the hots for Paul.

He wanted the calls like a hole in the head.

Come Tuesday with Paul in charge, Shiralee, two line handlers Ricky and Eric we departed at 4 15 am the dock Shelter Bay Marina.

In darkness motored across the estuary to the “Flats”. The other two yachts also arrived.

At 5am the Advisor (pilot) arrived by Launch.

In convoy with the other two yachts, with their advisors and line handlers we began the transit. Towards the first 3 locks. The Gatun locks. The up locks.

One mile from the locks, under the advice of the advisor the linesmen tied the three yachts together. As one. The Lagoon being the bigger vessel in the middle. She was to be the power house. Two smaller yachts either side.

All yachts are surrounded by their fenders. Tied to the rails. Ricky had made up 8 additional fenders for Perie Banou out of tyres, with plastic bags taped around them.

Thus all tied together we entered the first of the three locks. We are centre chamber. That is all 3 tied together are in the middle of the lock.

And the big ship in front.

The water that floods the locks, raises the vessels, is fed by man-made Gatun Lake.

The 3 locks join each other. One, then next, then next. Altogether we are raised 90 ft.

Gatun Lake built to feed the locks, also provides much of the transit route to the Pacific end of the canal. Feeds the Gailard Cut. Cut thru the mountain ridge, a continuation of the Andes Mountains.

The lake is beautiful. Fabulous. Ringed by jungle and jungle clad islands.

We get to see all sorts of nearby ships under way. They steam thru Gatun Lake. Wonderful.

At the other Panama City end of the canal are the last of the 6 locks. – (3) lower the ships to the Pacific.

The procedure for the final three locks was different. The Lagoon split from ourselves and went alone into a parallel set of locks.

A canal ferry went into our lock, followed by “Rumpus” the Beneteau – tying alongside the ferry, then ourselves being the smaller tying to “Rumpus”.

On the way up we came behind the ship – first in.

The reverse happens on the way down.

The ship, massive, comes in behind. Close behind.

Both sides of the ship are so close to the walls of the lock, it is difficult to see the gap either side. These huge ships are built to just-fit the canal.

The very last of these locks, oops we tied to Rumpus facing the other way. From where we came. Would be us. Why not!?

As we drew alongside the Beneteau our bow linesman threw the line. It landed on “Rumpus” as always. Quickly tied.

The stern linesman severely hampered by our shade cloth (made by David Dicks himself, out of one of my used mainsails) threw.

Just a bit of rope arrived on “Rumpus”. Their linesman missed. Current in the lock caught. We ended up tying the other way around.

Kristin, partner of Rupert Wilson (owners of “Rumpus”) said to me ” I thought you were doing a circumnavigation. Why are you going the other way?”

Anyway Paul used the current, spun the yacht, quickly on our way out.

It was a beautiful transit across Panama. My 7th. I would never get tired of doing it.

Paul and Shiralee managed all and everything. Organised all and paid for it. The agent, the linesmen, the transit, Flamenco Marina Balboa – Panama City. The hotel, reprovisioning, refuelling including additional jerry cans Americans call jugs, plus more.

They flew out of Panama 7am sat 26 May. Perie Banou departed 3 hours later for French Polynesia.

The most uncomfortable thing has been the none tourist season in Panama. Like Darwin the northern Australian city in summer “”The Wet”. Hot. Awful humid.

It is the “Wet” now in Panama. Very hot and humid.

The hotel was bliss.

When I departed Balboa 3 days back. It was calm. Calmer than calm. All that day, all that night and most of the next day. Then I fetched a light head wind. All overcast. Thunder and lightning.

Fill you in next week.