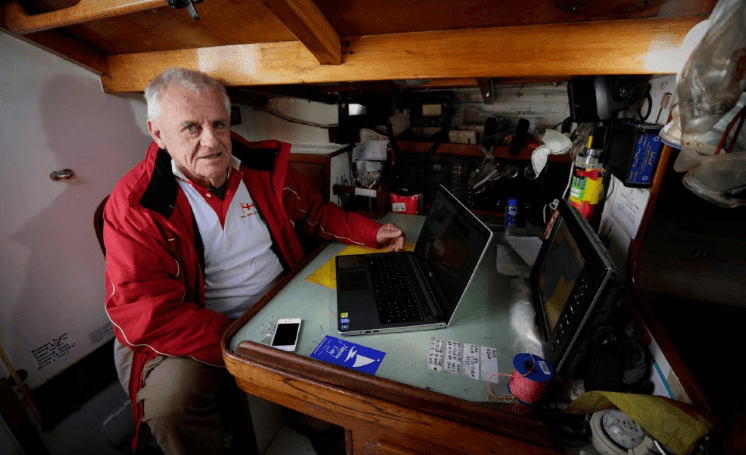 I am back on the high seas. (Not all that high). Bit flat in fact. Unusual.

Not so flat the other side of Africa. Cyclone in the Mozambique Channel. (With all that current too).

Anyway there was not much wind when I left the Royal Cape Yacht Club at 2-15pm last Wed. 15 Feb 17. Motor sailed all that afternoon and night.

Pleasant ride, nice for a start.

It would be better still if there were less (no none) ships and fishing boats on the track.

I will set course more west and try rid myself of them. (They show up via the AIS on the B&G screen). I adjust course now and again for the ships.

In this quiet sea I am using the Simrad Tiller Pilot (it is quick to assemble). The Aires wind vane self steerer, which connects to the steering wheel, is having a rest.

By the time you read this I should be in the good trade winds.

Behind me somewhere is a Swarbrick Space Sailor 27 named “Liberdade”. 27 ft single spreader mast head sloop. It will become the second “SS27” to circumnavigate the world.

In the 1970s (at the age of only 18) Kim Swarbrick, part of the Western Australian boat building family “Swarbrick Bros” designed the yacht. There is a fleet of SS27s in W A, most at South of Perth Yacht Club.

The two lads on board “Liberdade” are Rhys Brindley age 23 and Trevor Youngberg 24. Rhys is an electrician and I think Trevor too. They do not have the luxury of the B&G navigation. Theirs is two hand held GPSs and photo copies of my 1970,s charts of the Caribbean.

They are sailing on the “bones of their arses”.

If there are those in the Caribbean who need a yacht delivered or ferried (ex St Martin , British Virgin Islands, etc etc) here are a couple of experienced young Aussies coming thru.

Rhys and Trevor have 100% Australian accents.

All sorts of people read this blog including the Flag Officers and General Manager of the Royal Cape Yacht Club. I would sincerely like to thank RCYC for their wonderful hospitality (only the Tavern of the Seas has that). Also thank you to the beautiful bar and restaurant staff, plus never ever to forget, the kindness of the blokes outside, the ones with their fluorescent vests.

My busted ribs OK. Still take pain killers, but much less – just in case. My next blog will be Wednesday and the following Wednesday.

Myself the “Liberdade” guys Rhys and Trevor, and my usual driver Illunga (from the Congo) – we all dressed neatly went to clear-out for Saint Helena visiting the Port Authority, Customs and Immigration. As you do and as we did.

And also to buy some Pounds Stirling because Saint Helena is British, isolated and banking limited.

Buying Pounds Stirling was a drama.

To the American Express we went at the V&A Waterfront.

We pushed our Visa Cards across the counter and under the glass slit.

Look of horror. We get the cards shoved back.

“What’s wrong with our Visa Cards?.

The guy stabs his finger on the small print in the corner of the card. “Debit Card” (not a credit card). “Looks like a credit card”. ” It ain't”.

So we march off to the other end of the centre where FNB Bank have an ATM with a security guard.

Back to American Express.

The young guys get the bloke and I get the lady.

She sees me pull out a wad of notes.

“Where did you get the money from?”.

“Where is the receipt?”

“Blimey I don't think the ATM was giving out receipts”. But I dived into my pockets and sure enough found a FNB receipt. So like an idiot I give her the receipt.

That is when she must have decided I was “Ivan Milat” the serial killer.

Our driver told us he knew a retailer Down Town who exchanged money. “Good rates”.

The retailer counted all the monies like one of Packers fastest “Croupiers”. None of us knew if we got the right amount or not.