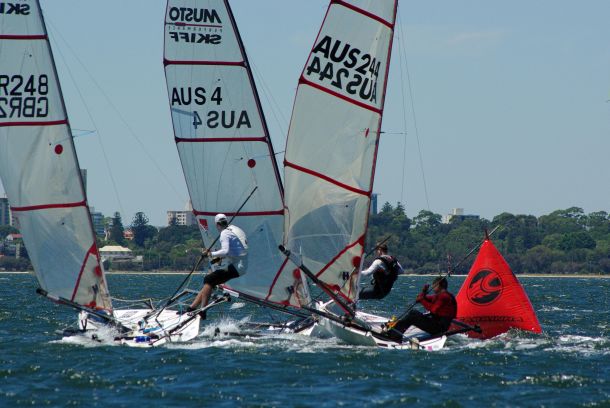 With Jon Newman confirmed as champion, the battle continued on the Swan River in Perth as the minor places were fought out. Surprisingly, the regatta itself had decided the placings with very little changes occurring in the last two races. Both Marcus Hamilton and Thor Schoenhoff had kept their placings, second and third and only minor changes in the top ten.

The first race of the final day started with the same south easterly blowing. Flat water, wind shifts and big gusts that boomed through the course laid across the Swan River made a mockery of a decision to go either left or right on occasions. Lucky for us we had a good Race Officer in Andy The fleet got away successfully with Nigel Wallbank making it to the top, riding the shifts to do so. He was followed by young sailor Stuart Keegan and who else but Jon Newman.

A big gust took the fleet down to the leeward mark where a few falls occurred as the boats came together. Unfortunately Nigel overstood the mark and allowed the pack past. The pack comprising of Stuart, Thor, Paul Newman and Jon Newman took off up the right hand side to reap a handsome dividend. From then on the race evolved into a game of pick the shifts and as may be expected Jon Newman took first with Stuart Keegan second and Dave Poston third.

The last race for the day and championships started with the pack splitting in half with those who went left losing as the breeze dropped momentarily. Wayne Bates (Batesy) hit the right hand corner and looked famous with 100 metres to go. A big left hand shift moved in and it is rumoured that the world champion may have been beaten to the top, but only just. As the race progressed, frequent swings and huge gusts of wind coming down the course kept them on their toes and frequently you could ride a gust down to the bottom. The lead changed several times but Marcus Hamilton made t to the line in front, followed by David Poston and Richie Robinson took third while riding a huge gust that took him past several players including Dennis Jones.

The regatta has concluded and Jon Newman has rightfully claimed his crown at presentations tonight. Marcus Hamilton gracefully thanked all and sundry for his second spot and Thor Schoenhoff was chuffed to take third spot to go with his State championship.

The containers are packed, the presentation dinner has all but finished and all that has to be done is to thank the organising team, the race committee and the volunteers who put the hard yards in to get the ACO Musto Worlds to the finish point.

Full results are available at http://www.mustoskiff.com.au/