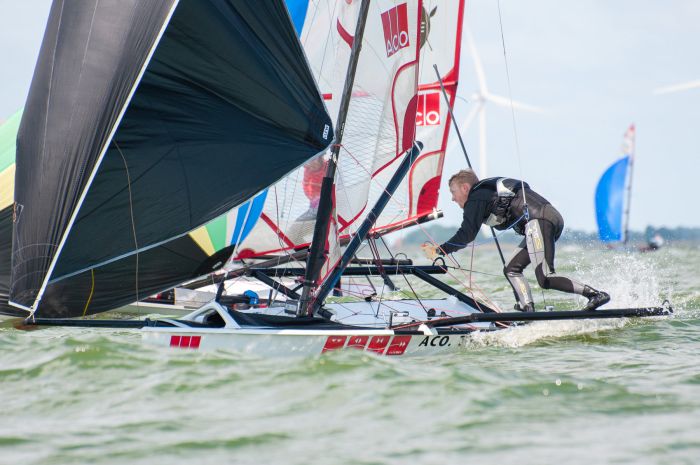 On the second day of the ACO 10th MUSTO Skiff World Championship 2019 there is a new leader. It is the reigning world champion Jon Newman. By winning the second and third race, the Australian managed to climb from eighth place to first position. Rick Peacock (GBR) is in second place and compatriot Bruce Keen dropped two positions to third place. Dutchman Paul Dijkstra is now in fourth place. With six races to go, the sailors can deduct their worst result from the provisional total score.

Because of the lighter weather, the emphasis today is less on 'survival' than yesterday. For many sailors it is nice to be able to focus more on tactics and strategy. Classification leader Newman is known for doing well in every circumstance. However, he wouldn't mind to have a little more wind. Jon Newman: “I would say, it was on the lighter side of perfect.”

The Dutch Paul Dijkstra starts the day at the shared second place. Dijkstra: “I've never been so strong at a World Cup.” Yet he doesn't feel any pressure. “I have learned that if I think too much, sailing only gets worse. I approach every race as a new opportunity.” The sailor is quickly back in the front of the field and defends his position successfully. Until fate strikes. “I had a port-starboard situation in the upwind leg. I was on port so I wanted to go around his back. At that moment the other boat is hits a wave and is slowed down. A collision was inevitable.” Due to the collision, his retractable bowsprit gets loose. Dijkstra retreats from the race but can't completely repair the defect. In the next race he will still be second, his best score so far. The last race the fault will unfortunately affect him. He can’t do better than a fourteenth position.

The MUSTO Skiff is a difficult and physically demanding boat to sail. It attracts a certain type of sailor and these are mainly males. But there are also two female sailors taking part in this championship. They are the British Elaine Turner and the Danish Jena Mai Hansen. For Elaine Turner it is her seventh season in the MUSTO Skiff. On the first day she was unable to finish in time. Today it went better. “But my arms are still tired from yesterday. I had to sail around the back of another boat and suddenly the sheet slipped from of my hand. That meant a capsized to luff.” Jena Mai Hansen is new in the class. She won a medal in the 49 at the Rio Games and was part of the Vestas crew in the last Volvo Ocean Race. Mai Hansen: “Even though there was only eight knots of wind, with my sixty kilos I still had to work hard. In the middle race I capsized three times in a row. Then I went sailing a bit 'safer', that was a big deal. I happen to be here on holiday and thought one day before the event that it would be fun to participate.” Turner and Mai Hansen can be found at 79th and 84th place respectively.

For many sailors, the large field with 91 participants holds a big challenge. Norwegian Geir Odmar Helda (66th place): “Of course we can never practice with such large fields. The good thing is that there are always boats around you to fight with. But it is also very difficult. Especially at the bottom marks I keep on losing many places.” The Dutch sailor Erik Loeff (85th place) agrees. “Sometimes it's too busy for me. I was in thirtieth position at the top mark. Then there was a port-starboard situation and I had to jibe. I can jibe perfectly, but not when I have only ten metres. That was the end of my good classification.”

Further progress of the World Cup
The event lasts until Saturday 13 July. For the whole week there are three races per day with a layday on Thursday and two final races on Saturday. According to expectations, the wind will be less strong for the rest of the week.