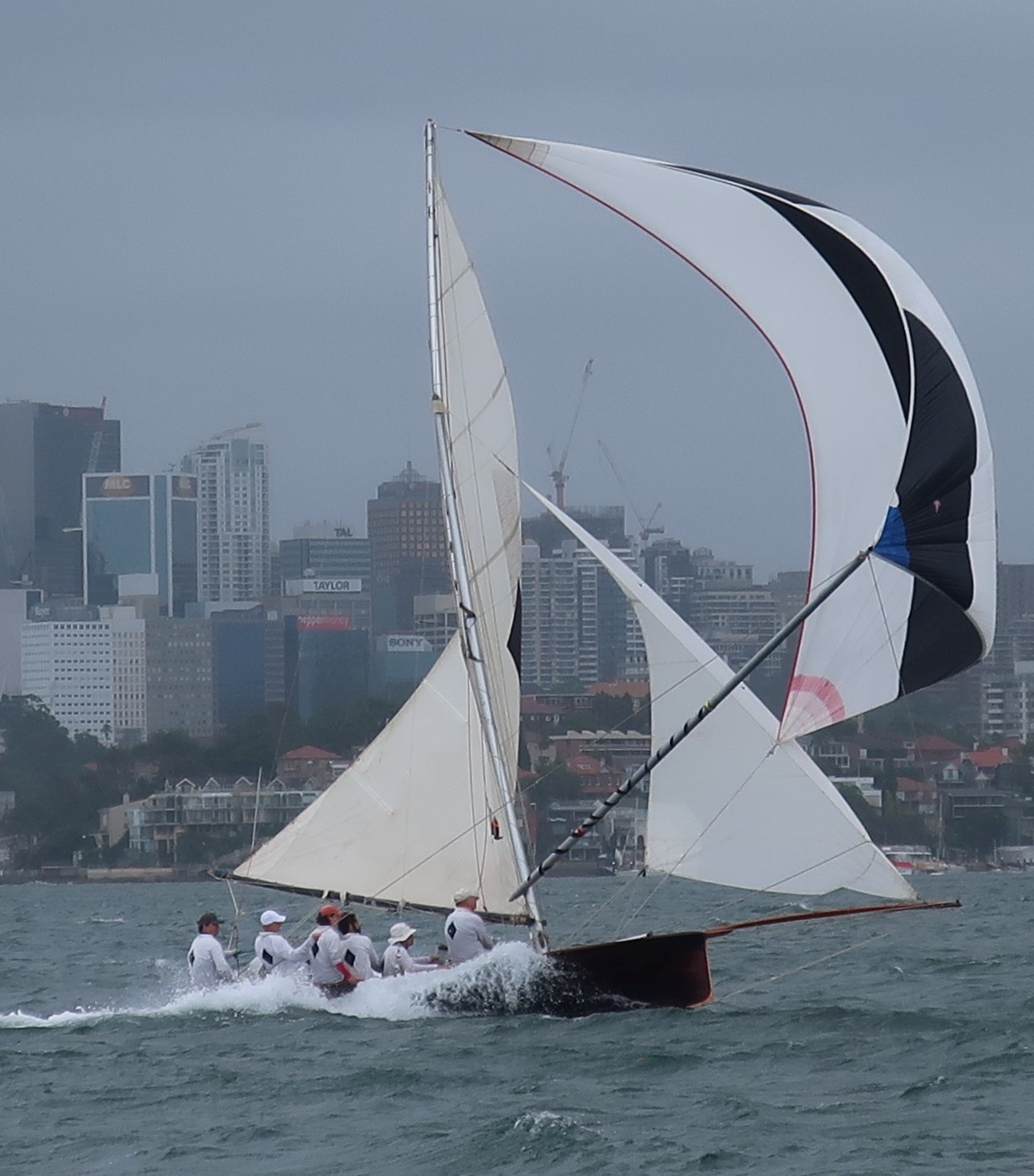 The 2019 Historic 18 Footer Australian Championship for the Galloping Ghost Trophy was conducted by the Sydney Flying Squadron in conjunction with the Australian Historical Sailing Skiff Association (AHSSA), on Sydney Harbour over 3 races on 19 January, 1 and 2 February.

Irishman Harold Cudmore made his annual pilgrimage down-under to defend the title he won last year at the helm of Yendys, while a number of skiffs had significant upgrades in preparation for this event.

The skiffs experienced a range of conditions over the three races requiring the use of various rig configurations, with Aberdare (John Winning) and Yendys engaged in a boat-on-boat contest for much of the event. Aberdare finished the series on 5 points, with The Mistake and Britannia on 11 and Yendys on 12.

Aberdare regained the lead soon after with both skiffs hard pressed and fully loaded-up under peak-head spinnakers. Yendys’ backstay failed halfway down this run resulting in a broken mast.

Aberdare went on to complete the next two legs of the course to score a comfortable win on AHSSA Rating from The Mistake, Britannia, Australia IV, Scot, Alruth and Top Weight. Fortunately there was a long break until the next race (ie Australia Day Regatta on the following/intervening Saturday) for Yendys to repair the damage.

Race 2 was held on a Friday afternoon, another southerly, this time not so fresh with the breeze more into the right from the south/south-west. Yendys started well and was first to round Clark Island for the very square run to Chowder. Aberdare made up a couple of places downwind to move into second place, while Yendys continued to lead.

Aberdare chased for the remainder of the race, the run back to Kirribilli was too tight to carry a spinnaker, Yendys eventually taking the gun by 40 secs, but more importantly winning the race on AHSSA Rating from Aberdare, Top Weight, Britannia, Alruth, The Mistake, Australia IV, and Scot.

Race 3 was sailed in a light easterly under big rigs to be contested in displacement mode (no spray flying or hull-planing today).

Aberdare tacked onto port soon after the start to pick up a good lay for the beat up to Shark Island. She was first to round for the square run back to Kirribilli, closely followed by Yendys, wherein the two skiffs resumed their two-boat duel for the remainder of the race, with Aberdare taking the gun by 40 secs but with Yendys claiming the win on AHSSA rating from her rival.

Another interesting series to showcase these amazing craft, and the close racing from such disparate designs of different eras of 18 footer sailing, with full credit to the respective crews, as always the vital ingredient for success in any skiff class.