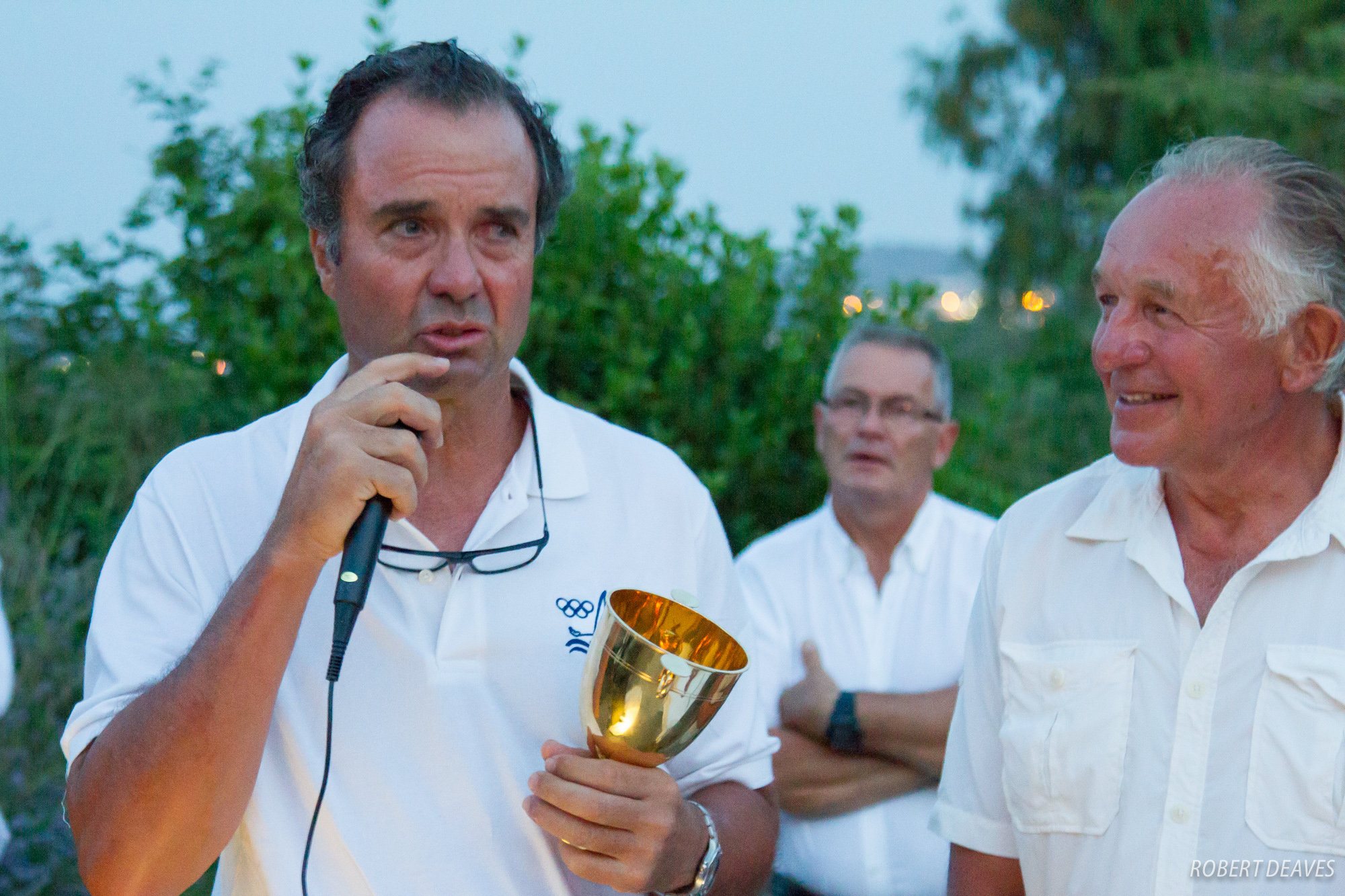 The 1977 Finn Gold Cup never happened. The winner of the renamed Finn World Week was never officially acknowledged as World Champion. Now, 40 years later, Spaniard, Joaquín Blanco has been acknowledged by the class and his peers as the 1977 Finn World Champion and has had his name engraved on the Finn Gold Cup, denied to him four decades ago by the unwelcome intrusion of global politics. Now, four decades later, on Saturday, 23 June, 2017, the Finn Class has rewritten history.

In 1977, 115 sailors from 27 countries gathered in Palamos, Spain, for the 22nd running of the Finn Gold Cup. However, after the Spanish Government refused to accept the entry of the two South African sailors, the International Finn Association withdrew the Finn Gold Cup from the event. It was renamed Finn World Week and has become a scar on the grand history of the class; a decision that cost the 21 year old Blanco his right to lift one of the greatest trophies in sailing.

The wind at that 1977 event matched the mood of the competitors, with only five races possible in unusually light and feeble breezes. Blanco, who was already European Champion, won two races, was always in the top 10 and finished 23.3 points ahead of second placed José Luis Doreste, also of Spain, who would go on to win gold in Pusan at the 1988 Olympics. Blanco himself finished fourth at the 1984 Olympics in Los Angeles.

Wind the clock forward 40 years and both are again sailing Finns in Palamos this weekend, with the Nàutic Club Costa Brava-Vela Palamós organizing a regatta to commemorate the 40th anniversary of the 1977 Finn World Week. More than 30 sailors are racing in the same waters of Blanco’s victory including many from 1977 including Blanco himself, as well as Doreste, Gerardo Seeliger (sailed Finn in Kiel in 1972), Jesus Turró (sailed Tempest in Montreal in 1976), Jose Maria Pujadas and Francisco Castañer.

This gathering of Spanish Finn talent past and present seemed like too good an opportunity to miss to finally acknowledge Blanco’s achievement. On Saturday evening he was presented, albeit 40 years late, with the Finn Gold Cup, his name newly engraved to finally recognize his victory. Winning the Finn Gold Cup is a supreme achievement in the sport of sailing, and his name now sits alongside some of the greatest names in sailing of all time.

Holding the trophy for the first time, he said In an emotional, broken voice, “It’s so emotional for me because I have been waiting for this for 40 years; it’s too much. After the 1977 races in Palamos I thought that I could also win in Manzanillo in 1978, but I could only finish second to John Bertrand.”

How did he feel at the time? “I was not sad. I did my best sailing in 1977 and won and I was very happy then. I also won the Europeans that year as well. I know there were problems politically and the Finn class made the correct decision, and at that moment they couldn’t give the prize to me.”

“It was OK for me at the time; it’s very difficult to say but it was very important to for me to be in the list of world champions in the Finn Class.”

IFA President, Balazs Hajdu explained, “The decision taken 40 years ago to remove the Finn Gold Cup from competition is not in question here. We cannot, and shouldn’t, comment at such a distance, in such a difficult and different political climate. It was a very different time. But we can, and should, acknowledge the achievement of Joaquín Blanco.”

“South Africa has moved on a long way from 1977, and in the atmosphere of reconciliation and restoration, we feel that Joaquín Blanco should be acknowledged for his achievement by his peers and that is all we are doing today. We are rectifying the regret that Blanco felt at winning the regatta but not being able to lift the Finn Gold Cup. It is now time we did that.”

IFA President of Honour, Gerardo Seeliger, who competed in 1977, presented Blanco with the Finn Gold Cup and a Finn half model to remember the occasion, said, “Correcting a decision is the great privilege of wise men. At the time we were pressed by politics, and we, the Class, had a long fruitless debate. As a member of the then Executive I feel proud to give to the sport what belongs to the sport. We have in Olympic sport so many similar precedents.”

Another competitor in 1977, Gus Miller from the USA wrote, “Congratulations to Joaquín Blanco again. The event showed the collective wisdom of Finn sailors. When they were confronted with an international political situation that could have prevented there being any racing at all, the Finn guys found a solution that solved the problem at the time. Now that the roots of the larger problem have evolved, it is time to call Blanco the 1977 Finn Gold Cup winner.”

Earlier in the day, the 32 Finn sailors, old and young, had three fantastic races in Palamos Bay. A light wind in the first race built through the day to 12-14 knots by the end and with blue skies, temperatures in the 30s, it was a perfect day’s Finn sailing. In Race 1 the fleet edged left before running out of wind and trying to cross back to the right, Victor Serrano rounded the top mark ahead of Spanish Cup champion Miguel Fernandez-Vasco. Fernandez took the lead on the downwind to lead round the course for the first of two wins. By the second race, the fleet were generally favouring the right side as the breeze built.

Alex Muscat took two second places in the first two races, almost passing Fernandez-Vasco in the closing stages of Race 2. In the final race of the day, Paul McKenzie found the best speed on the right to lead round the first lap. Muscat rounded the final top mark just ahead and the two battled downwind with Muscat just crossing ahead to level the score with Fernandez-Vasco, who finished third.

This meant that Fernandez held the lead overnight by virtue of two race wins to Muscat’s one, while McKenzie, who could only race one day, is third overall.
One of the big questions was how the stars of yesterday were going to perform, and that answer was, in fact, very well. While Blanco found himself at the front for a while in Race 2, it was Doreste who ended the day in fourth, bettering Blanco’s score for the day by five points.

Three more races were scheduled for Sunday but no more racing was possible with persistent cloud, light rain and an almost non-existent wind. So the results stand from Saturday with Miguel Fernandez-Vasco winning from Alejandro Muscat and Paul Mckenzie.